Here’s something troubling about BrainDead, CBS’ new political dramedy from The Good Wife creators Robert and Michelle King: After watching three hour-long episodes, I can honestly say I wouldn’t be upset in the slightest if any of the central characters fell victim to the alien bugs feasting on the brains of Washington, D.C., power players and turning ’em all into deeply uncompromising, rabidly partisan monsters.

The at-arms-length feelings BrainDead inspires spring largely from its deeply uneven tone. As a comedy, its punchlines land with the wobbliness of an amateur gymnast flopping off the uneven bars. As a thriller, its stakes barely reach the level of a 30-second ad for Raid insecticide. And as a critique of modern American politics, BrainDead (premiering Monday, June 13, at 10/9c) is a little too pleased with itself, considering said critique never really digs deeper than “Washington’s lost its mind!” (Did I mention each installment comes with its own groan-inducing title, such as Episode 2’s “Playing Politics: Living Life in the Shadow of the Budget Showdown — a Critique”? I know, I know… that shouldn’t really factor into my review, but it’s indicative of the kind of twee thinking that plagues the series.)

The murkiness of BrainDead is as surprising as it is disappointing, given the Kings’ deft work of infusing the scorching drama of The Good Wife (which, at its peak, was the greatest network drama of the last two decades) with an undercurrent of delectably wry humor.

BrainDead is perhaps even more ambitious than its Emmy-nominated predecessor, but it also doubles-down on the schlockiest aspects (Eli’s tiny office, the glib mockery of Iowa campaign traditions) of The Good Wife‘s uneven last two seasons. 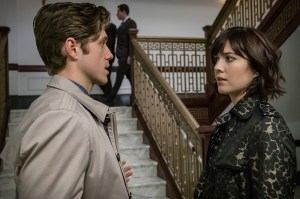 The story follows Laurel (Mercy Street‘s Mary Elizabeth Winstead), a struggling documentary filmmaker lured by her powerful dad (The Good Wife‘s Zach Grenier) to spend six months working for her U.S. Senator brother Luke (Law & Order: SVU‘s Danny Pino). As footage of Bernie, Hillary and The Donald unspools in the background and the war between fictional Republicans and Democrats leads to a government shutdown, Laurel’s investigation of an incident involving the sudden personality change of a constituent’s husband (and his encounter on a cargo ship containing a mysterious crate from Russia) puts her on personal orange alert. By the time a scientist’s head explodes in her face — and way too many folks around her start putting The Cars’ 1984 smash “You Might Think” into heavy rotation — Laurel finds herself meeting on the regular with loopy conspiracy-theorist scientist Gustav (Underground’s Johnny Ray Gill), flirting with a Republican rival (Graceland and Grease: Live‘s crazily charismatic Aaron Tveit) and getting questioned by a verrry handsome FBI agent (Mercy’s Charlie Semine) whose interest in her seems to extend beyond “CHIs (Catastrophic Head Injuries).”

Did I mention Monk‘s Tony Shalhoub walks around with a Washington-monument-sized piece of scenery in his mouth as a Republican power player whose brains have been turned to mush by the alien bugs — and who now wants to create a conservative grassroots movement called “The One-Wayers”? (The alien presence, it appears, seeks to destroy humanity through political gridlock.) Or that Laurel’s job involves face-to-face meetings with hayseeds and weirdos who’ve (among other things) created chocolate canine sculptures for no apparent reason? (Surely, there are sharper ways to underscore the absurdities of these United States?) Or that Gustav requires Laurel to slip her cellphone into a foil envelope every time they’re together?

Don’t get me wrong: BrainDead manages to be intermittently intriguing just through the sheer strangeness of its premise — not to mention the sparkling chemistry Winstead exhibits both with Tveit and Semine. And in a different series, Pino’s cheerful, adulterous, win-at-all-costs politico could’ve been downright fascinating.

Ultimately, though, like the inside-the-beltway white matter that gets consumed by those little alien critters and winds up turning to pink goo, BrainDead goes splat under the weight of its outsized aspirations.

The TVLine Bottom Line: Neither as funny or as scary as the actual 2016 presidential race, we’d be surprised if CBS doesn’t pull the plug on the unique but ultimately unrewarding BrainDead before summer is over.