Hey, we all want someone to blame when something goes awry. And at this time every year, consumers of TV are quick to carp that their favorite scripted show — be it Limitless, The Family or Game of Silence — got cancelled “because of reality-TV.” The numbers, however, indicate that unscripted fare is no longer TV’s go-to filler, and thus no longer a proper scapegoat.

Having seen many a commenter lay blame for a fave’s misfortune at the feet of the Reality-TV Gods, TVLine sliced and diced the numbers several ways, to see if there is any support for the claim that scripted shows are being scuttled in favor of (cheaper) reality-TV programming — especially in the context of the most recent five years. What follows is by no means an acquittal of The Bachelor et al’s myriad transgressions, but an overview of today’s actual programming decisions.

EXHIBIT A
As announced at May’s Upfront events, the upcoming 2016-17 TV season features a total of nine hours of unscripted programming (including neither sports nor newsmagazines, which are a constant). Specifically, NBC’s The Voice fills three weekly hours and ABC’s Dancing With the Stars occupies two, while Survivor, Shark Tank, Hell’s Kitchen and Caught on Camera are an hour apiece.

Yet five years ago, the fall of 2012 opened with 13 hours of reality-TV, including three hours’ worth of The X-Factor, a weekly DWTS results show 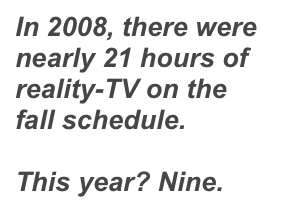 and America’s Next Top Model. The fall of both 2013 and 2014, meanwhile, packed in 15 hours of reality-TV, with the latter hosting Fox’s short-lived time hog, Utopia. (Of course, that’s a drop in the bucket compared to, say, the 21 hours of reality-TV that clogged the weekly airwaves in fall 2008. Very dark times, they were.)

To recap, for our 140-character culture: Where The Big 5 just a couple of years ago unloaded 15 hours of reality-TV, now they are only airing nine.

EXHIBIT B
Zero (0) new reality-TV shows were added to the broadcast networks’ schedules for the 2016-17 TV season, unless one counts Celebrity Apprentice‘s return (at midseason) from a short hiatus, with new host Arnold Schwarzenegger.

EXHIBIT C
One might argue that reality-TV shows are used as “scheduling spackle,” and thus aren’t trotted out until later in the season, after a scripted show fails. And yet this past TV season closed in May with a total of 10 unscripted programs airing in primetime, on par with nine in 2012.

EXHIBIT D
Of the 14 total hours of primetime real estate opened up by last season’s cancellations, exactly one — NBC’s Friday lead-off spot, which will continue with Caught on Camera (versus last fall’s Undateable/Truth Be Told sitcombo) — will be filled by an unscripted show.

EXHIBIT E
The two blackest holes in modern-day primetime — Tuesdays at 10 on ABC, and NBC’s Thursdays-at-10 slot — have almost never been patched up with a reality-TV series, as tempting as it surely has been. ABC instead segued from Body of Proof to Private Practice, Lucky 7, Killer Women, Mind Games, Forever, Wicked City and Of Kings and Prophets, and only just recently filled the hole with the Shark Tank offshoot Beyond the Tank. Similarly, NBC has endeavored to cure its Thursday ills with any number of (oftentimes good) dramas, from Awake and Parenthood to Hannibal, The Player and Game of Silence.

IN SUMMARY
Make no mistake, reality-TV is not without its shortcomings, and it does eliminate jobs for actors and writers. And lord knows, broadcast TV in the late ’00s did a terribly tawdry dance with the reality-TV devil, often at the sacrifice of worthy, if low-rated, dramas and comedies.

But given that the broadcast networks are opening their seasons with markedly fewer hours of reality-TV than just five years ago, no new such shows were added for the coming season, and only 1 out of 14 recently vacated primetime hours is being filled this fall with unscripted fare, the truth is that cancelled scripted shows tend to be replaced with… other scripted shows, ones that might deliver a better (or different) demo, or are owned by the network itself (but that’s a TV Q for whole other day!) — until, the hope is, one eventually finds an audience and holds down that particular fort.

So yes, be angry. Lament that a quality drama (Awake!) didn’t deliver bigger numbers, or wasn’t “given a chance.” Just don’t throw blame at reality-TV in a kneejerk manner, because that argument simply doesn’t hold in 2016.

Is there a TV Q you’d like looked into? Email InsideLine@tvline.com.