Another season of Devious Maids, another high-profile murder in Beverly Hills.

Monday’s premiere was full of twists — Genevieve chose Zoila over the baby, Adrian can secretly walk after the accident and Carmen’s daughter has arrived in Beverly Hills, to name just a few — but none so shocking as the death of Peri Westmore in the episode’s final moments. (Take note, Spence-and-Rosie fans: I said her death was “shocking,” not “sad.”)

“We love Mariana [Klaveno], and that was one of the toughest choices I’ve ever been a part of on this show,” executive producer Sabrina Wind tells TVLine. “But one of the discussions we had with the network was that it was so much more interesting when you care about the person murdered in the first episode. The only good part about it is that Mariana works so much, we don’t have to worry about her [being unemployed.] She’ll be fine, even if we miss her every day.”

Read on for more of Wind’s Season 4 teases, including the mysterious owner of Zoila’s new house, a surprise pairing for Evelyn and more:

TVLINE | I’m glad. I feel like no one ever really leaves the show.
Not at all, and that’s absolutely the fun. There’s actually another character we kill off in the middle of the season, and we were like, “Time for flashbacks!” We never let characters go.

TVLINE | Speaking of which, what did Peri see when she was looking for Ben? Is he dead, too?
He is not dead. When she looks for him, she see something shocking, and it’s of dire importance to the rest of the season. But it’s not Ben.

TVLINE | With Peri out of the way, Rosie and Spence could theoretically get back together — but I have to assume there will be all kinds of new obstacles in their way.
I’ll say that they work very hard at that this season — with little to no success. [Laughs] And what happens after Peri’s death affects their relationship, but not in a way you might expect. … There are always going to be complications, but we took a light, fun, funny point of view.

TVLINE | I love that Spence’s memory sequence was done exactly like Mike’s when he was shot on Desperate Housewives.
Yes! I’m so glad you noticed that. That’s exactly what we modeled it after. We felt it was one of the best flashback sequences, so we handed it to the editors and said, “We want this.” It’s very powerful and emotional. … We have a joke that Spence will hit his head again and suddenly remember all the s–tty things that have happened with him and Rosie, but for this one, we wanted to evoke that same sort of beautiful, longing memory. 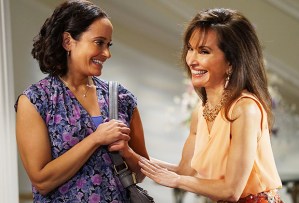 TVLINE | I’m glad Zoila is alive, but should we be curious about the mysterious owner of her new house?
[Laughs] Of course! We don’t put things like that in there for no reason — besides the fact that we wanted to give Zoila a new wardrobe immediately. The identity of the designer will play into the story eventually, but not for a while.

TVLINE | I’ll just have to enjoy her romance with Ryan McPartlin for now. That was a fun little tease in the premiere.
Right? Goodness, Ryan, what fun we’ve had with him this season. The character is so light and airy, and he’s so dreamy and fun.

TVLINE | She needs Zoila… but she’s got Rosie. Any chance Rosie can fill that Zoila-shaped hole in her heart?
[Laughs] No, but isn’t that the best? It’s going to be fun watching as she Genevieve tries to figure out what to do with this person who is so not Zoila. She couldn’t be more different, and we lived for Susan’s impression of Rosie. I wasn’t there the day they shot it, but I was watching dailies, and I was like, “This is all I could have imagined and more.” … We love the idea of Genevieve hating Rosie, who’s just the sweetest person.

TVLINE | Normally, we can look to Genevieve and Zoila for comic relief. Who should we look to for levity now?
Oh my goodness. Well, we see a lot more of Marisol hanging out with Evelyn, which is really funny to me. Evelyn has always provided comic relief, but it’s on a whole new level this season. Genevieve also gets a new playing partner; in search of a new friend, she also gets a gay hairdresser. Though I suppose I should say gay, with a question mark.

TVLINE | Solid casting on Carmen’s daughter, by the way. They look like they could be related.
Right? She’s a Spanish-language star of her own, but she’s new to American audiences, and she just lights up the screen. We just love, love, love that we got to have her on the show. She’s outstanding, and she and [Roselyn Sanchez] love working together. They have great chemistry.

TVLINE | And what can you tease about their dynamic moving forward?
Well, Carmen is definitely not used to having to deal with anybody’s bad judgment — besides her own. So there are a lot of repercussions to having this young woman in her life who’s actually out-Carmening her. She’s seeing someone else now doing everything she’s done, and she might be seeing the error of her ways.

Your thoughts on the premiere? Hopes for the rest of Season 4? Grade the episode below, then drop ’em all in a comment.