“Call the Director. We struck out again.” 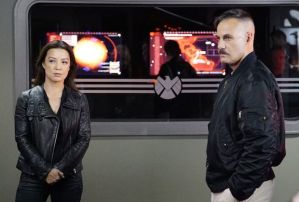 Had Coulson abdicate his post atop the super-secret S.H.I.E.L.D. organization in the wake of Hive’s near-annihilation of humankind? Or was his title taken from him, given the too-close-for-comfort, last-minute defeat of the Hydra god?

Yet the why of Coulson’s

step down is not as compelling as the who — as in, who are he and Mack (and FitzSimmons, once they’re back from that well-deserved holiday) now reporting to? Is it friend or frenemy? A face familiar to the team, or new?

Rewatch the six-month time jump below, then vote on your predicted pick for S.H.I.E.L.D.’s new Director.