Meanwhile, Boris Kodjoe — who joined the freshman medical drama midseason — has been promoted 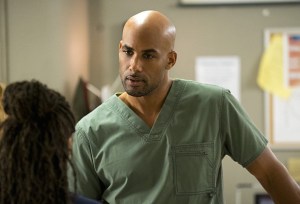 to a series regular, as Will Campbell, as has Jillian Murray‘s Heather Pinkney, says Deadline. Other cast additions, including a male co-lead for Marcia Gay Harden, are expected, as the show rejiggers itself to reach a broader audience.

“Bonnie Somerville and Raza Jaffrey are beloved by the audience, as well as the rest of the cast and crew,” series creator Michael Seitzman told Deadline. “Their departure is painful for us, is no reflection on the extraordinary work they both did on the show.”

Code Black averaged 7.1 million total viewers and a 1.3 demo rating during its 18-episode freshman run — numbers that swelled to 10.2 mil and 2.0 with Live+7 DVR playback.

The series was renewed for Season 2 in mid-May, and will again air Wednesdays at 10/9c when it returns in the fall.