MTV’s Scream returned for its second season Monday with a dark new mystery, a few new faces and, most tragically, a handsome new victim.

TVLine spoke with new showrunners Richard Register and Michael Gans about the premiere’s biggest twists (R.I.P., Jake!…?), as well as what we can expect from the rest of Season 2:

TVLINE | As the new showrunners, what did you love about Season 1 and what did you feel needed tweaking?
RICHARD REGISTER | The characters are amazing, the actors are amazing, the story is amazing and the mythology is amazing. So we just wanted to dive deeper into that pool — and to spill blood everywhere.
MICHAEL GANS | We really wanted to stay true to the first season, but also to twist what you knew about all those things. The first season is a bible for us; we want to make sure we stay true to all the elements of that.
REGISTER | We push the characters into crazy psychological situations this season. We wanted to play with the fact that this is an ongoing story about people who are living after having been through one massacre. What does that mean? How do you live under the great shadow of Brandon James?
GANS | Our characters also have infamy now. They’ve been deemed the Lakewood Six, the survivors of the Piper massacre. So it’s interesting how Noah has become part of the mythology he’s been obsessed with since he was a child.

TVLINE | Moving on to the premiere, I have to admit that I wasn’t expecting Jake to be the first victim.
REGISTER | [Laughs] What are you talking about? Jake has a huge storyline this season. … I will tell you this: He is not gone.
GANS | That’s not the last time you’re going to see Jake Fitzgerald. 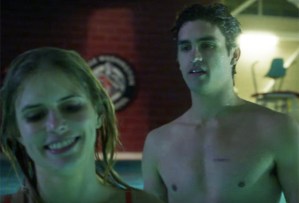 TVLINE | Can you offer any insight as to why you chose him?
REGISTER | There are a lot of things at play. It needed to be someone that was utterly beloved so that you really know it could happen to anyone. It’s just better to build characters, so that when you see the light go out in their eyes, you feel like they’re really gone. Death matters more when that happens.
GANS | In a serialized drama like this, you want to set a new course for your main characters, and we thought this would do it very beautifully.
REGISTER | Jake is amazing. Any character that important deserves a good death, and I think we gave it to him.

TVLINE | We’ve seen these kids lose friends before, but I imagine losing Jake will take a particularly heavy toll on Brooke…?
GANS | Brooke’s season is spectacular. She has quite a journey ahead of her, one you wouldn’t expect. It’s grand. It’s Carrie-esque. She goes through a lot of struggle.
REGISTER | It really hits her hard, yes it does. But she’s a much smarter, wiser girl than she was last year. Sad does not play well on her.
GANS | Here’s a relationship where she teased him for an entire season, then they’re deep in their relationship at the top of this season … and you’ll find out this was probably the first time she ever felt true love.

TVLINE | At least Kieran and Emma are alive and together. What’s going to be their biggest obstacle?
REGISTER | We’re going to play with the parameters of how far you can push Emma. Willa Fitzgerald is an astounding actress, really incredible. So that’ll be their struggle: How is Kieran there for her in that process? He’s also been to hell and back, and he had a difficult relationship with his father before he died. Going through this brings them together, but two broken people struggling to get back to normalcy isn’t going to be an easy thing.

TVLINE | Lastly, when are we going to start getting some answers about Audrey’s connection to Piper?
REGISTER | The letters, as you saw, play early on. They’re an insanely important part of the season. Little pieces of that story evolve over the course of the season, and you’ll eventually discover exactly how horrible and impactful Audrey’s relationship was.

Your thoughts on Jake’s death, Audrey’s connection to Piper and the season premiere in general? Grade the episode below, then drop a comment with your full review.