CBS’ Person of Interest receives an especially meaningful number this week — as in “Episode 100.” But first, a team member must overcome a warped sense of reality to make her way home.

First up, in the episode “Sotto Voce” (airing Monday at 10/9c), the criminal mastermind known as “The Voice” returns and traps Reese and Fusco in the cop shop with several armed gang members and the latest POI. Shaw meanwhile continues her journey home from the Johannesburg facility where she had been kept by Samaritan all this time.

“Shaw is still vacillating between trying to figure out whether she’s actually in reality or not,” co-showrunner Greg Plageman previews. As affirmed by the news report she heard about the near-viral outbreak in New York City, “The truth of the matter is that she is, she has finally escaped and it’s real, but that now becomes the pressing issue — her grasp on reality,” says the EP.

Standing between Shaw and seeing Team Machine again, says co-showrunner Jonah Nolan, is not just some 8,000 miles but also “the induced psychosis of being forced to kill herself 7,000 times” via Samaritan’s vicious VR simulations. “That might be the biggest stumbling block.”

(And to those who have been emailing TVLine asking about when the for-real Shaw/Root reunion might take place, Nolan warns, “That’s kind of not how our show works, sadly. The reunion will be short-lived.”)

Elsewhere among the good guys’ ranks, Fusco informed Reese that not only has he sought a transfer to a new department/partner, but he’s done helping out Finch’s mysterious band of heroes. That devastating decision, however, might force the team’s hand. “This is the part of the season where our gang realizes that it’s diminishing returns keeping Fusco in the dark,” says Plageman. “The fact is his life is in peril anyway, so there comes a point in time where they no longer can keep [the complete truth] from him.”

Watch an exclusive sneak peek from Monday’s episode,
then read on for Episode 100 preview:

Ominously (yet rightfully) titled “The Day The World Went Away,” Tuesday’s episode marks the series’ 100th hour. Given that each of this farewell run’s precious 13 episodes obviously had to be special, what makes this milestone even more so? “I would say the big-ass gun!” answers Nolan with a laugh, referring to Root’s choice of weapon during a car chase/ 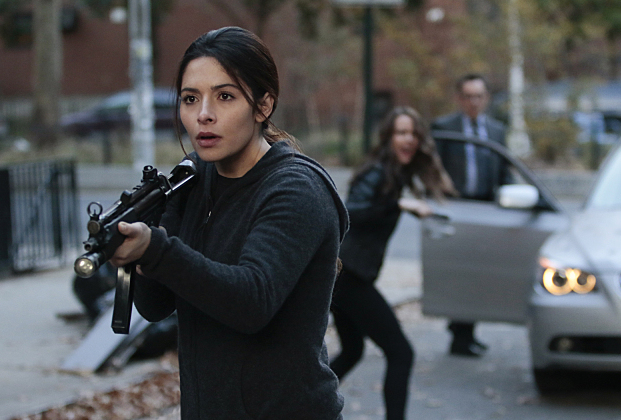 shootout that is so spectacular, it actually ate into the budget for the following episode (which Plageman directed).

“I’ve been dreaming about that action sequence for about five years,” Nolan shares, “waiting for the right moment to toss it in there. The sniper-through-the-sun roof, cruise control, steer-the-car-with-your-four-inch-heeled boot maneuver is something that Root was destined for for an awfully long time.”

But more importantly, Episode 100 also finds Finch’s cover identity blown, amplifying even further the jeopardy the team now faces and forcing Harold to make some hard choices about their attack plan from here on.

“We always wanted to explore another side to Michael Emerson’s character, when he had finally had enough,” says Plageman. Episode 100 “felt like a big episode emotionally for our characters, and a major turn for one of them.”