Will Jamal Lyon be singing the sound of silence when Empire returns for Season 3 this fall?

After all, when last we saw Jussie Smollett’s rising pop-star character in the Season 2 finale, he’d vowed to hang up his mic until his troubled family ended its cycle of violence and treachery — then made good on said promise by failing to perform at his father Lucious’ twisted nuptials to ex-fiancée Anika (who happened to be carrying Lucious’ grandbaby).

Showrunner Ilene Chaiken promises Jamal will “continue to dig in his heels” on that front. “The question now is, can Jamal also bring his brothers and his mother along with him on this stance, and say ‘This is no longer how we have to go about our lives and our business?'” 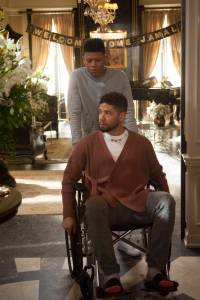 Even more importantly, Chaiken says, Season 3 will be about “really examining the journey of Jamal’s recovery. In the finale, he comes out of the hospital after being shot, but he’s clearly not recovered physically, and certainly not psychically.”

Will that leave any room for his budding romance with mega-producer Derek/D-Major (Tobias Truvillion), who exploded in a homophobic rage and accused Jamal of making an unwanted advance when Lucious walked in on them in a tender moment?

“We think their story is really worth telling,” Chaiken teases. “[The angry outburst] that happened between D-Major and Jamal in the penultimate episode will be pretty hard to come back from. But it’s also very real. A lot of gay people know what that moment is about — as do a lot of people who aren’t gay. Some of the stories we tell are pretty melodramatic. I believe in all of them, but Jamal and D-Major’s is grounded in reality.”

What’ll it take to right the ‘ship? “If Jamal can forgive D-Major and understand him, and if D-Major wants to change and to find a way to live more honestly, then there’s hope there for a relationship,” the executive producer reasons. “They’re really interesting together and they have great chemistry. We plan to see more of them and explore the dynamic. We want to pay attention to the true details of what these moments mean.” 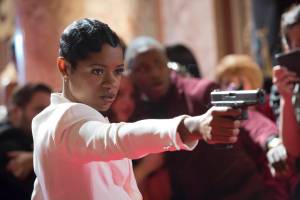 D-Major’s not the only one who’ll need to make amends with the middle Lyon son when Empire returns. His friend and duet partner Freda Gatz (Bre-Z) ended the finale behind bars after putting a bullet in Jamal (one she’d intended for Lucious).

“Freda will be in Season 3,” confirms Chaiken. “She’s part of our story. It’s not over. Jamal understand she’s a victim, but he still has to deal with the fact that she shot him. It was a hugely traumatizing event that she perpetrated on him. But he believes in her and in the mission of ending the cycle. So he’s going to have to do something about it.”

Are you already anticipating Season 3 of Empire? Any hopes for Jamal’s storyline? Sound off below!