Did Shonda Rhimes announce a time of death — or at least a months-long coma — for ABC’s “#TGIT” marketing campaign?

For the first time since 2013, ABC’s primetime Thursday lineup this fall will not be entirely furnished by Rhimes’ Shondaland production company. With Scandal on an extended hiatus and not premiering Season 6 until midseason, ABC is comfortably nestling between Grey’s Anatomy and How to Get Away With Murder the real life-inspired freshman drama Notorious, which stars Piper Perabo (Covert Affairs) and Daniel Sunjata (Graceland) and, more notably, is a Sony Pictures Television/ABC Studios co-production, counting Josh Berman (The Blacklist) among its exec producers.

That lineup invites the question: Will ABC promote the 1-2-3 punch of Grey’s Anatomy, Notorious and HTGAWM as “#TGIT”?

Or more to the point, can they?

Rhimes herself strongly suggested that a lineup with a non-Shondaland show in the mix does not qualify as #TGIT, by tweeting on Thursday night (after both Grey’s and The Catch aired their season finales), “This is the final night for #TGIT until 2017! See you for #GreysAnatomy and #HTGAWM in the fall!”

The prolific producer seemed to reiterate her point with a second tweet: “#TGIT returns with #GreysAnatomy #Scandal and #TheCatch next year! #Shondaland.”

Leading up to this month’s Upfronts Week (during which the broadcast networks presented their 2016-17 scheduled to ad buyers), ABC scheduling chief Andrew Kubitz told Ad Age, “We see Thursday night as a viewership opportunity, with either couples or women by themselves who want to sit down and escape and have fun and drink their red wine and have some popcorn. Right now, Shonda shows are the ones that are resonating with that [group], but that doesn’t mean any other show we are developing now or in the future can’t fit within that TGIT brand” — suggesting, at least, that a non-Shonda show could get folded into the campaign. 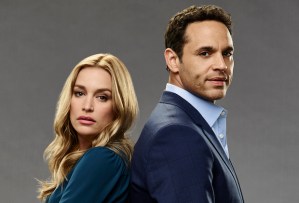 The freshman Thursday drama Notorious is not a Shondaland production

Meanwhile, just days prior to Rhimes’ aforementioned pair of tweets, TVLine asked recently installed ABC entertainment president Channing Dungey if “#TGIT” by definition is “all Shondaland shows,” or could the campaign be applied to a lineup that included an outlier such as Notorious? She responded, “We have not even really started talking about our marketing plan for the fall yet, so I would say, ‘Stay tuned.'”

ABC first launched “#TGIT” (as in “Thank God It’s Thursday”) in fall 2014, when the series premiere of How to Get Away With Murder made for an attractive Shondaland trifecta that also solved a years-long Thursday lead-off problem (by moving veteran medical drama Grey’s to 8 o’clock) and seized upon the Scandal cast’s live-tweeting frenzy. At the time, ABC marketing VP Marla Provencio told the Los Angeles Times, “[#TGIT] showed that people can come to one show and stay the whole night if there is something that has a true natural flow.”

But need that “natural flow” spout forth from the same production shingle?

ABC could have maintained an all-Shondland Thursday lineup this fall, given that The Catch (a cat-and-mouse drama starring Mireille Enos and Peter Krause) was renewed for Season 2 and Still Star-Crossed (a Rhimes-produced follow-up to the story of Romeo and Juliet) was among the network’s new pick-ups.

Dungey, though, has said that due to its period setting and requisite extra production time, Still Star-Crossed was “always” earmarked for a midseason launch (and most likely not on Thursday), while The Catch will return at midseason to offer viewers the “consistency” of a Grey’s/Scandal/The Catch Thursday combo, as just concluded this month.