The following recap, by the very definition of the word “recap,” contains monstrous spoilers from the Gotham Season 2 finale.

Strange days came to an end — though with stranger days perhaps to come — as Fox’s Gotham wrapped Season 2 on Monday night.

With Bruce and Lucius (held captive by Nygma) and Jim Gordon all unaccounted for after infiltrating Arkham with the intent of finding Strange’s secret lab, acting captain Harvey Bullock sent in an extraction team — until “Gordon” (actually a hinky Clayface) met them at the gate to ward them off.

Back at the cop shop, Gordon’s atypical behavior did not go unnoticed by either Bullock or Alfred (who was taken aback by the detective’s indifference to Bruce’s predicament), yet both bought into the “touch of the flu” excuse. Eventually, Barbara showed up at the GCPD, on Penguin’s behalf, 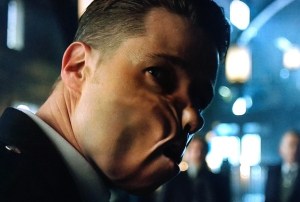 and she was the one to out the phony Gordon — by distorting Clayface’s malleable mug with a slug.

Back at Indian Hill, Bruce, Lucius and Gordon were separately grilled by Nygma and Strange about 1) “Who runs Indian Hill?” and 2) “Who runs Wayne Enterprises?” When none of the captives knew the answer to the second question, Strange told his owl-masked superior that they had nothing to worry about — but she was not appeased. Rather, she told Strange to enact the protocol by which the lab and its monsters will be blown to bits by a big, round bomb in the belly of the facility.

As soon as Strange set the bomb in motion, he happened upon a clash between Freeze and Firefly — only to wind up caught in their icy-hot crossfire. After thawing out, he was shaken but OK, and worried about the monsters that had been loaded into a bus and were now under mind-controlling Fish Mooney’s watch. Though having a collective zero ability to do so, Gordon and Lucius raced to successfully defuse the bomb (thanks to misinterpreting Ms. Peabody’s request for water), but the GCPD had less luck in intercepting Fish. Instead, the bus 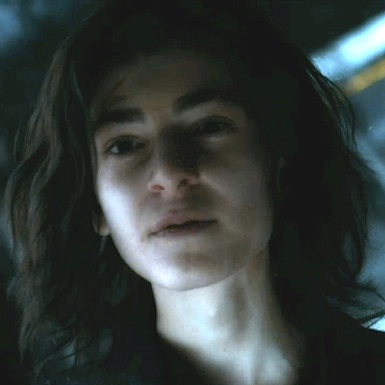 and the cop car in pursuit were derailed by Penguin, Butch and their Gatling gun-toting, Strange-chasing gang — after which, Penguin fainted upon laying eyes on Fish, his resurrected boss-turned-nemesis.

As for Gordon, he left Bullock in charge of rounding up the monsters, as he sped away to find Lee and hopefully salvage that part of his life (armed with encouragement and helpful tips from Alfred and Selina). Bruce meanwhile elicited a couple of “Aw, bloody hells” from Alfred by revealing his determination to track down the “secret council” that runs Wayne Enterprises …and perhaps much more).

After Fish skulked away from the crash scene, a homeless woman unwittingly unleashed the bus full of assorted monsters… including a long-haired doppelgänger for Bruce Wayne (whom I thus exclusively dub Kylo Wayne).

What did you think of the Gotham finale, “Transference”?