Warning: The following post contains spoilers for Monday’s Blindspot season finale. Read on at your own risk.

It seems like just days ago that Blindspot‘s Jane and Weller were finally rekindling their romance. Y’know, sharing multiple kisses in the locker room, exchanging giddy glances at the realization that they could finally be together — all of the usual, sickeningly cute TV-romance stuff.

Oh, wait. That’s because it was just days ago.

Of course, after Monday’s Season 1 finale, those sweet memories seem like a lifetime away, and the climactic hour seems to have dissolved any hope for a #Jeller romance.

During the episode, both Jane and Weller made the discovery that Jane is not, in fact, Taylor Shaw, and it infuriated Weller to know that the woman he thought was his long-lost childhood friend had been lying to him for weeks. (The jury is still out on which revelation was more shocking for Weller: the idea that Jane isn’t Taylor… or the fact that the real Taylor died at the hands of Weller’s own father years ago, and was buried as a child at one of the campsites where she and Weller used to spend childhood summers.)

After realizing that Jane’s identity is still a mystery, which likely makes her an accomplice to the conspiracy against himself and Mayfair, Weller decided to arrest Jane in the final moments of the hour. But by that point, Jane had already been through enough — most notably, killing Oscar via a scythe to the chest after he had tied her up in a dilapidated barn and threatened to wipe her memory again.

Oh, and Reed, Zapata and Patterson unlocked a whole USB drive’s worth of information about Orion and Daylight. (As if they weren’t hoarding enough secrets already.)

TVLine caught up with showrunner Martin Gero to discuss the eventful finale, including the reason behind Oscar’s demise, the ways in which Jane and Weller can possibly move forward in Season 2 and how scoring a 23rd episode allowed Season 1 to become even stronger.

TVLINE | There is a lot to unpack from this finale. Let’s start with Oscar’s death. Did that play out exactly the way you’d initially planned? Or did killing him off have anything to do with François Arnaud booking another show on NBC, Midnight, Texas?
No, in fact, because we killed him off, he could get another show on NBC. It worked out great for everybody. There was a 20 percent chance that we could have used him in Season 2, but as we started talking and had more concrete discussions about Season 2, we realized it didn’t make sense for him to continue in the early part of Season 2. We wanted to let him know as soon as possible so that he could do a pilot, and it just worked out amazingly well. NBC is crazy about him, we’re crazy about him. It’s great to keep him on the network. 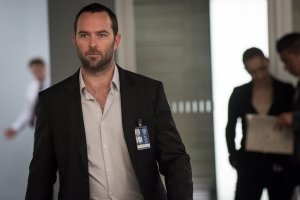 TVLINE | A number of the casualties this season — Marcos, Tom Carter, Oscar — are people that have links to Jane’s past and can fill in some of the gaps in her memory. Why do you think the show is better served by killing off those ties to her past, instead of keeping them around to help her?
Well, we’re a show that likes killing people. [Laughs] The show has mortal jeopardy in it every week. Every week, they barely survive, and if you don’t kill people, those stakes diminish. If it’s a show where no one dies, it’s a show that’s less exciting to watch. As far as Jane’s connections to the past, what we have planned for her in Season 2 — it made the most sense to not have Oscar around for that. And the other thing is that this is the episode where she chooses. She’s been playing both sides, essentially, with one foot in the FBI world and one foot in Oscar’s world. After Mayfair’s death, she decides, “No more. I’m on the good guys’ side.” She wants to bring Oscar in. Her intention is not to kill Oscar, but Oscar’s not going to go quietly, and the fight obviously turns lethal.

TVLINE | And I imagine for you, as a showrunner, it would almost be too easy to bring in these people from Jane’s past and say, “Hey! Here are all the answers about who you really are!”
Yeah, we have to really limit [that]. Unfortunately, as storytellers, we have to keep the people that could potentially ruin the series in the span of a conversation at arm’s length.

TVLINE | We also learned in this episode that Jane is not Taylor, and it almost feels like we’ve reset the show — in other words, we’re back to having no idea who Jane is. Was that your intention?
It was, in a way. That’s not going to be a mystery next season. You’re going to find out exactly who she is in the first episode of next season, so it’s not like we needed that for additional mystery. It had more to do with Weller’s journey this season and his belief that this was all about Taylor Shaw and the relationship that he had with his father. We thought that was an incredibly emotional roller coaster ride for them. To start with him thinking that she’s Taylor Shaw and then have it all fall apart in the end — it’s just heartbreaking for him. And for Jane, she starts next season so much more vulnerable because she’s been lied to by the bad guys, as well.

TVLINE | Speaking of the Weller/Jane relationship, why is Weller so furious with her in the final moments of this episode, from your perspective?
She lied to him, you know? Had she not fabricated the memories of growing up together — Oscar gave her a bunch of photos and said, “Create memories out of these. They’ll bring Weller comfort.” And it did. And it also gave him certainty, to the point where he was second-guessing his father, right up until he digs up Taylor Shaw’s body. He knows she’s complicit in it. He doesn’t understand how little she’s complicit in it, but from his point of view, she lied to him about being Taylor Shaw, and therefore, she must be involved in somebody trying to really f—k up his life. He’s furious.

TVLINE | And given her arrest at the end of the episode, how will their relationship shift in Season 2?
You don’t want the audience to be way ahead of your characters, and the audience knows that Jane wasn’t really acting maliciously. Jane did most of these things under threat of them killing Weller. So their relationship is certainly under extraordinary duress, and it’s going to take some time to recover organically. Season 2 draws our most interesting relationship into a more interesting place, dramatically. 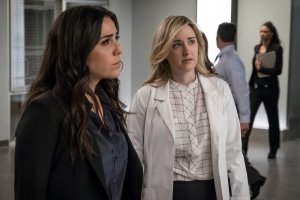 TVLINE | The information that Reed, Zapata and Patterson discover about Orion and Daylight — will that stay between the three of them?
They’re going to share that information immediately with Weller and, eventually, Jane. This year, Zapata had her stuff, Reed had his stuff, Mayfair had her stuff — none of them were really sharing information. They all had good reasons why not to share information, but at the beginning of next year, everybody’s going to start on the same page and move toward this common foe, which is finding the people that did this to Jane and to Mayfair and to Weller.

TVLINE | A few months back, you told me that you were grateful to have been given a 23rd episode, instead of having to pack the whole season into 22 episodes. Had you only been given 22 episodes, what would be different about these final episodes?
The last three episodes would have been exactly the same, actually. It was actually the middle episodes that allowed us to experiment with the form of the show, which turned out to be really successful. I’m incredibly proud of Episodes 21, 22 and 23. It’s really fun to have sat there a year ago and think, “This is what it’s going to be,” and then actually get to do that and have the math of the story work. But what I’m most excited about, especially as we go into Season 2, are the run of episodes like 17, 18 and 19 [from Season 1].

You have Episode 17, which was a very character-heavy episode. The case didn’t really come in until Act 3 — that was Patterson and David’s treasure hunt, and you got a whole bunch of scenes with the rest of the cast in their downtime, which turned into a Silence of the Lambs-type thriller. And then in Episode 18, you do a huge, hilarious heist episode with Rich Dot Com, which feels like a departure, but he was also very much responsible for Ali and Weller breaking up. And then in Episode 19, which is a very different episode, structurally, for network television — you have a very different story structure about a school shooting. Tonally, those three episodes are wildly different, but they all feel like the show, and for us as storytellers, that’s an exciting thing for us to see work on this show. That’s what that extra episode gave us — a little bit of breathing room to play around with the form of the show, which I think — I hope — turned out successfully.

Blindspot fans, what did you think of the season’s final episode? Grade the finale in our poll below, then hit the comments to back up your choice!