Loaded with eye-popping action sequences, cheeky humor and unexpected sweetness, the premiere of Preacher, based on the comic book series by Garth Ennis and Steve Dillon, suggests that AMC’s supernatural dramedy just might turn out to be the best new show of the year. But we can debate that after you’ve worked your way through this recap and its reminders of how appealingly badass Dominic Cooper and Ruth Negga were as the titular preacher, Jesse Custer, and his combustible old flame, Tulip O’Hare.

WELCOME TO ANNVILLE | As the pilot began, a shadowy something — and surely “something” is the scientific term for it — made its way from outer space to enter and then explode the body of a priest in Africa. Over the course of the episode, this “thing” made itself briefly at home in one religious type (a magister at a Satanic temple in Russia) after another (Tom Cruise at a Church of Scientology), trailed on its travels by an as-yet-unidentified pair that called to mind the tag team of Mr. Wint and Mr. Kidd from Diamonds Are Forever.

Meanwhile, in Annville, the town’s prodigal son, Jesse, was approached by the young son of Donny Schenck, a churchgoing Civil War re-enactor and all-around a–hole. Having heard about the preacher’s rough-and-tumble past, the boy hoped that Jesse would beat his father for beating his mother, Betsy. Turned down, the kid asked the preacher to pray for him. “If anyone were listening,” Jesse said to himself, “I would.” That night, he asked Annville’s sheriff, Hugo Root, to look into the abuse report. And the lawman replied that he’d be glad to — if and only if Betsy filed a formal complaint. (Charmed.)

ACTION FIGURES | Three-thousand feet above Annville, an Irish flight attendant named Cassidy (Joe Gilgun) learned to his horror that he wasn’t merely pouring out cocktails for a planeload of rich cokeheads, he was pouring out cocktails for a planeload of something even worse for a blood-sucker like himself: vampire hunters! After doing away with his attackers in a fight scene that should’ve satisfied even John Woo fans, Cassidy grabbed an umbrella to protect himself from the imminent dawn and leapt from the now-pilotless plane. As introductions go, that was gonna be hard to beat. And yet… 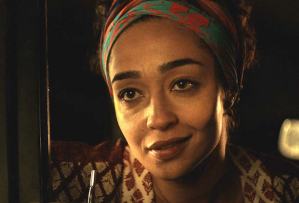 Tulip did it. We met her in Kansas, as she was locked in an epic battle over a map with two foes in a car speeding through a cornfield. Though she emerged victorious by pulling a Mike Tyson on one of the thugs’ ears, since more adversaries were on the way, she was forced to recruit the kids on whose farm the car finally died to help her make a bazooka out of tin cans and toy soldiers. (Tough, gorgeous and brilliant to boot? Who could possibly resist Priscilla Jean Henrietta “Tulip” O’Hare?!?)

‘WE ARE WHO WE ARE’ | Checking in on Tulip’s Uncle Walter, Jesse deduced that his ex was in Annville and beat a hasty retreat before they could come face to face. However, after paying a visit to Betsy to ask if she’d file a complaint against her husband — a futile endeavor, since she insisted that she liked being hurt — the preacher still wound up reconnecting with Tulip. When he insisted that he was done doing “jobs” with her, she replied, “I’m glad we still hate each other.” Trouble was, he didn’t hate her. “I wouldn’t know how,” he admitted. “Don’t make me teach you, then,” she shot back. (Banter grade: A.)

Later, Jesse paid a visit to Sheriff Root’s teenage son, Eugene, aka Arseface, who feared that the man upstairs was mad at him for shooting himself in the face (an act that left him with what looked like an anus for a mouth). “God doesn’t hold grudges,” the preacher assured him. And if Eugene listened really closely the next time he prayed, Jesse was sure that he’d once again hear the Lord talking back.

MESS WITH THE BULLY… | After making Cassidy’s acquaintance at the local watering hole, Jesse was assaulted by Donny for talking to his wife. Even as the d-bag taunted the preacher about what a tough guy he was supposed to have once been, Jesse didn’t raise a hand to him. Until, that is, Donny announced that he was gonna go home and whup his son for tattling on him. “Don’t touch him,” Jesse said. What’d happen if Donny did? “You’d hear a noise,” Jesse replied, like a bunny might make if it was caught in a bear trap. And Donny would be making the noise. Obviously, a huge brawl ensued. Once Jesse — with a helping hand from Cassidy — had clobbered not only Donny but all of his fellow Civil War re-enactors, he asked if the creep was ready to hear that noise… then broke his arm.

Arrested for his troubles, Jesse was bailed out by Emily, the young, widowed mom who helped him out at the church because she so clearly dearly loved God. Unfortunately, the preacher didn’t just thank her for being “such an asset” (ow!), he informed her that he was hanging up his collar. Still, he was willing to give the Almighty one last chance. So, upon entering the church, he gave God basically a “Speak now or forever hold your peace” ultimatum… to which God didn’t respond. Something did, though — in fact, the “thing” that opened the show. It arrived and boom! Knocked Jesse on his ass.

POWER? SUPER | Following a flashback to a young Jesse promising his about-to-be-murdered father that he’d grow up to be one of the good guys — “’cause there’s way too many of the bad” — he awakened to learn from Emily that he’d been out for three days. Now it was Sunday, the day he was supposed to tell the congregation that he was quitting. On his way into church, he was waylaid by Ted, a parishioner who, throughout the episode, had complained about his mother’s criticisms. “Be brave,” said Jesse, something magical occurring as he spoke. “Tell her the truth. Open your heart.” Miraculously, off Ted went to do just that.

At the pulpit, Jesse was starting to explain why he was giving up when he realized that he couldn’t do it. Instead, he gave a helluvan inspirational speech, promising to be the good preacher that his flock deserved. “This is why I’ve come home” to Annville, he concluded, “to save you.” But at what cost? While Jesse was re-turning over his new leaf, Ted was at his mom’s retirement home literally cutting into his chest to open his heart to her. Luckily — or not? — the duo who’d been pursuing the “thing” were just arriving in Annville.

So, what did you think? Grade the premiere below, then hit the comments with your review.