After three consecutive weeks of major deaths, The Originals went surprisingly easy on its core characters during Friday’s season finale. Of course, the conventional definition of “easy” doesn’t necessarily match up with the Mikaelsons’.

TVLine spoke with executive producer Michael Narducci about the episode’s biggest twists — and what they could mean for Season 4 — but first, a quick recap:

After revealing his undead status to the Mikaelsons — and murking every last Strix member — Marcel gave Elijah and Kol his one-of-a-kind love bite; as if that wasn’t bad enough, Freya was also poisoned. A desperate Hayley woke a still-hexed Rebekah from her slumber in an attempt to quell Marcel’s rage, but the irreversible damage had already been done.

Freya was able to prolong the gang’s collective existence by transporting their souls to one of them fancy alternate planes and tethering their lives to Klaus, who went on trial for his many, many, many (just assume this goes on for a few more pages) sins. Given that his jury was literally full of his enemies, it should come as no surprise that he ended up with Papa Tunde’s blade embedded within him by the end of the mistrial.

Season 3 came to a close with Hayley and Hope carting their caravan of bodies out of New Orleans in search of a cure. And now, it’s time for some answers…

TVLINE | Is it at all accurate to call Marcel the Big Bad of Season 4?
I definitely think it’s not accurate. Marcel is furious that Davina was so callously put to the side in favor of “Always and Forever,” and when he confronted the Mikaelsons about it, they killed him. And if he hadn’t taken that serum, he’d just be dead, so he has a perfectly valid point. It’s also important to note that Marcel was the King of New Orleans prior to the beginning of this series, and he ruled over a very factious city — there were humans, the werewolves had been expelled and the witches were being held in subjugation. Now, Marcel is going to find himself as the most powerful creature in all the land; the werewolves are still pretty much a non-factor, the humans are down and scared, and the witches have lost their connection to the ancestors. It’s going to be a very different landscape, but it’s still Marcel Gerard. He’s done what he’s done, and how he’ll have to figure out how to live with himself and rule New Orleans. He’s not possessed or evil or a monster by any stretch. 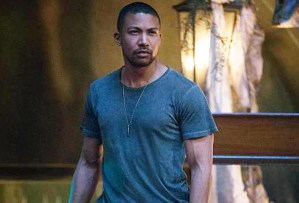 Very soon after the end of our finale, because the Elijah line of vampires won’t drop dead, Marcel is bound to figure out that Elijah is still alive. And when he does that, he’ll think, “Maybe Kol’s not dead either. Or Freya.” All he has as collateral is the long-suffering body of his sire, who’s entombed in an undisclosed place. There are a lot of rich, interesting things to play with moving forward. But the question is: Is this family permanently destroyed, and is Marcel going to be their enemy forever?

TVLINE | I assume Hayley won’t be able to save everyone on her own. Who might she turn to for help?
There were hints in the finale of what Hayley’s next move is going to be. I don’t want to say too much, but I don’t think it’s outside the realm of possibility that Hayley will look to find a way — either by using her own vampire power or by using a witch — to try to communicate with [everyone in the dream world]. She has a giant puzzle to figure out in order to cure everyone, and given that they’re dying from a wolf bite, I think you can guess who she might turn to.

TVLINE | Given the hectic nature of the episode, do you foresee a time jump next season?
It’s almost mandatory that there be some sort of time jump. This is a definitive loss on the part of the Mikaelsons. The prophecy predicted they would fall, and they fell. There’s no easy way out of the situation they’re in. Hayley and Marcel are both going to have to start from scratch as he decides how he’s going to deal all these new vampires in town. There’s going to be a lot of story to tell, but I think we’ve painted ourselves into an unbelievable corner, and it’s going to be great fun to get out of this situation.

TVLINE | Vincent is our only non-comatose character in New Orleans who might pose a threat to Marcel, should conflict arise. Will we see them at odds?
The great thing about Vincent is that he’s his own man. We’ve seen him stand up to the Mikaelsons, and we saw him recognize the courage and beauty of Cami. He has friends who are police officers, and he has witches he’s sworn to protect. He has a strong moral compass, and I think if Marcel stepped out of line further, becoming the kind of king he was when we met him in Season 1, Vincent would step up and have something to say about that. It could also be best for New Orleans if he tries to find peace, and if that’s the case, he’ll be able to do that.

TVLINE | Lastly, just out of curiosity: What do you think Hope’s first word(s) will be?
[Laughs] I can’t imagine. One question is: Are we, as an audience, going to get to see those first words? If there’s a time jump, maybe not. But given everything that’s happened, and how the Mikaelson family has been so completely deconstructed, Hope is left with no one but Hayley. I’m sure her first word will be “mama.” It’s the person who’s taking care of her right now, it’s got to be “mama.”

Your thoughts on The Originals‘ season ender? Hopes for 2017? Grade the episode below, then drop a comment with your full review.