It’s fight or flight time for DC’s Legends of Tomorrow, who in the CW drama’s freshman finale (airing Thursday at 8/7c) must recoup from a devastating if noble loss and make one final, hopefully successful, run at the immortal Vandal Savage.

What ace in the hole does Savage have yet to play? Do the Legends have any tricks of their own left to reveal? And how does a mystery man figure into the series’ future (so to speak)? Here, showrunner Marc Guggenheim previews the final showdown and more.

TVLINE | As the joke goes, I guess my first question is not so much where the Legends will have their final faceoff with Vandal Savage, but when.
That’s correct. Basically they’re having their fight across our “greatest hits,” which, let’s be honest, no other TV show can do. We’re really embracing the time travel nature of the show. 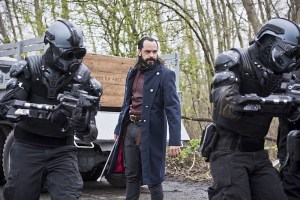 TVLINE | How is the team’s morale after bidding Leonard adieu?
It’s pretty low. It wasn’t just losing Leonard. It was losing Leonard, and Kendra and Carter, and literally losing track of Vandal Savage. So when we come in at the top of the season finale, literally all is lost, so they’re in a pretty dark place. Dare I say they are ready to give up?

TVLINE | Who’s going to deliver the rousing pep talk that gets our team back on the field?
That’s a good question. I think what’s fun about this episode is usually there is one inspirational speech — that’s sort of become the trope, and everyone rallies behind it. But this time it’s a little different. This time it’s a bit of everyone coming to the same conclusion separately.

TVLINE | Like you said, they’ve lost so much — might as well go down swinging, right?
Exactly. The mission is not done.

TVLINE | We’ve seen many fight sequences and gizmos over the course of the season. Is there anything particularly cool and new in the finale that maybe we haven’t quite seen before?
There are a few things. I think a couple of people are going to display some new powers, and as we’ve sort of intimated, the epic fight against Savage is wholly unique. I’ve got to give a shout out to Kevin Mock, our editor, who really put together, I would say, one of the most unique sequences that you’ve seen on a time travel show — because it’s not only epic but it is taking place literally across history.

TVLINE | “A time travel show” — of which there are many now!
Yeah. I mean, it’s crazy. [ABC, NBC and Fox all have new time travel series premiering next season.] It’s very, very interesting. I wish all those showrunners luck. This time travel thing is not for the faint of heart.

TVLINE | Well as I tweeted to Kryptonsite’s Craig Byrne, let’s hope they don’t all have different sets of rules, because that’ll be impossible to keep track of.
It’s funny. Legends gets a fair share of criticism from people who are like, “Wow, they’re really fast and loose with the time travel rules.” To that I say, “Yeah, guilty as charged.” I guess I watch television very differently than a lot of other people do. When I watch a time travel show, I’m not watching it to see if the rules are being followed. I don’t understand the way a lot of people watch TV these days, as if it’s some game of “Gotcha!”

I remember during the Legends pilot, we had a character make a Darth Vader reference and someone tweeted me, “You already screwed up. It’s 1975 and Star Wars didn’t come out until 1977.” I was like, “Yeah… the scene you’re talking about takes place in 2016, so get off my back.” [Laughs] We’re literally just 20 minutes into the pilot and people are already trying to play this game of “Gotcha.” It’s like, “Are you watching television or are you trying to catch [a mistake]? How is this fun for anybody?”

TVLINE | What percent of the finale is showdown and what percent is epilogue?
Great question. I will say it’s very deceptive. What’s interesting is that the season finale doesn’t feel like 42 minutes. It feels like we’re pushing a lot more story than you would typically get. There’s a lot of confrontation and climax but there’s a fair amount of setup and there’s also a fair amount of epilogue. There’s just so much going on in this episode.

TVLINE | How do you respond 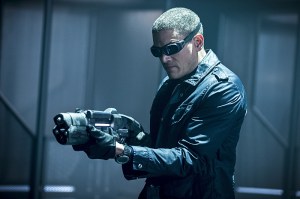 to the people who in the wake of last week’s death have said, “Oh man, I loved Snart! He was one of the three reasons I watch the show!”? [Next season, Wentworth Miller will be a series regular across all of The CW’s superhero shows.]
Well, I would say the other two reasons — whatever those are — are still on the show. I would also say that he’s not off the show. You’ll still see him next season. In fact, check out the season finale.

TVLINE | What is left to say about Patrick J. Adams’ role [as a mystery superhero] in the finale and beyond?
Without spoiling what I think is actually a really cool, fun moment, I will say that Patrick’s appearance serves to plant a flag for next year. We have a very definitive endpoint to the Vandal Savage story, and Patrick’s role really serves to give you a very good sense as to where we’re headed next year.

TVLINE | Lastly, reflecting on the season gone by, which technical accomplishment are you most proud of?
The visual effects that I’m most excited by on any show are the ones that aren’t such obvious visual effects. Clearly, a giant robot fight was a visual effect, but I was very, very pleased with the hangar in the Vanishing Point in Episode 15, with all the Waveriders, because that was full CG [computer-generated]. That was our characters being incorporated into a CG environment, which is something that is really hard to pull off even with feature [film] time and money. I thought it was really seamless and I think the folks at Encore, our visual effects house, did an amazing job. But certainly, the Atom fight is tough to top.