Chicago Med‘s showrunners summed up the Season 1 finale as one full of transitions, and Tuesday’s closer indeed was loaded with goodbyes, job changes and even a potential new couple.

The drama kicks off when Dr. Downey takes a turn for the worse, his cancer having spread to his brain. Refusing surgery, he tells Dr. Rhodes, “You know what I’m facing. I’d just as soon skip it if you know what I mean. Check out a little early.”

Dr. Rhodes, however, is not on board to help his mentor kill himself. Instead, he tries to bring Dr. Downey’s beloved Hawaiian islands to him as they have a heart-to-heart. Dr. Rhodes shares that he’ll be starting a cardiothoracic fellowship.

“Thank you. For everything,” he finishes, tearing up. Just as he walks out of the room, Dr. Downey starts to code. “He has a DNR. Let him go,” Rhodes instructs the nurse. And as the hour closes, Rhodes scatters Downey’s ashes in Hawaii’s ocean.

* Given his precarious position with the hiring committee, Dr. Halstead sets his sights on job offers from hospitals in Miami and L.A. But perhaps Goodwin doesn’t hate him as much as he thinks, because he ends up getting a full-time attending position at Chicago Med. The doc thanks Goodwin, who replies with a smile, “My fear is you’re going to get yourself kicked off the staff. I’m curious to see how long it will take.” 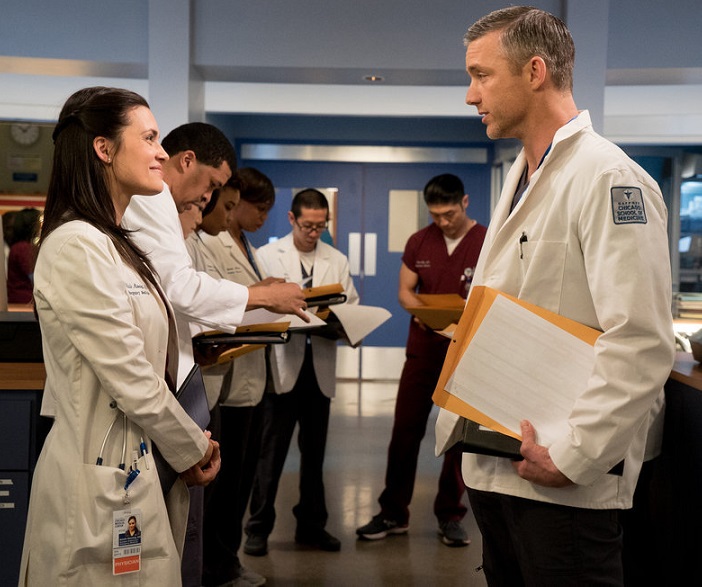 * Maggie points out to Dr. Halstead that Dr. Manning is no longer wearing her wedding ring. A good sign, right? Too bad for Dr. Halstead that one of the new fourth-year med students is former firefighter Jeff Clarke, who was buddies with her deceased husband and is now divorced. I am into the idea of this love triangle.

* After April gets knocked over by a patient, her boyfriend suggests she quit her job and that they get married. It’s not exactly a romantic proposal, so you can’t blame her for telling him she has to think about it. Meanwhile, her side is hurting her, so Dr. Halstead forces her to get an x-ray, which reveals that she likely has TB.

* Dr. Reese rejects her pathology match, leaving her with no job and no idea of what she’s doing to do next.

* Goodwin’s husband leaves her because he’d rather spend what time he has left happy.

* Dr. Choi consults Dr. Charles about his parrot, who won’t fly and is having nightmares. The shrink suggests the bird has PTSD. (Yes, for real. Season 2 goal: a stronger storyline for Dr. Choi.)

Chicago Med fans, what did you think of the season ender? Grade it via the poll below, then hit the comments to back up your pick!