We hope you haven’t been getting too attached to any of Blindspot‘s major players. Judging by Monday’s episode, the show’s writers aren’t sentimental about keeping them around.

By the end of this week’s outing, our May Sweeps Scorecard racked up two more entries in the “Fatalities” section — and it wasn’t even the season finale!

The first casualty of Season 1’s penultimate episode? Bethany Mayfair, who spent the hour investigating the suspicious circumstances that got her ousted from the FBI and brought Sofia back into her life. After piecing together some of the murkier details — for example, the identity of who really killed Tom Carter — Mayfair believed she had gotten to the bottom of her mysterious arrest.

But when Mayfair arrived at an abandoned warehouse, expecting to come face-to-face with Oscar, she instead was met with Jane, who had also gone to the warehouse to tell Oscar their mission was off. Realizing that Jane was somehow involved in the conspiracy against her, Mayfair threatened Jane’s life — but before she could follow through, Oscar killed Mayfair with a bullet to the chest, leaving Jane furious at what he had just done.

But the hour’s most watercooler-worthy moment happened in the very final minutes, when Weller’s dad succumbed to his bad heart. As Bill became less and less lucid with Kurt at his bedside, he tearfully admitted to his son that he did kill Taylor Shaw — then passed away before he could explain further.

We talked with Blindspot creator Martin Gero about Monday’s eventful episode, including why it was the appropriate time to kill off Mayfair, how Weller will cope in the wake of his father’s revelation and the ongoing mystery about who Jane really is, if not Taylor Shaw.

TVLINE | You’ve said in our previous conversations that you essentially had all of Season 1 plotted out from the very beginning. So instead of asking when you decided to kill off Mayfair, I’ll ask why it was the right thing to do at this point in the season.
For us, ousting Mayfair from the FBI was always where we were going to go. Very early in the year, we had discussions in the year about what to do with that character after [she left the FBI]. We had a number of scenarios in place that just didn’t feel right, and I was certainly fighting the idea of killing her off. If you get into a situation where you can have Marianne Jean-Baptiste on your TV show, you should keep Marianne Jean-Baptiste on your TV show. [Laughs] But it became really clear to us that that would be the reason we were doing it, and the story [where she dies] made the most sense, emotionally, for Jane and for Weller. The tricky part about this is, we’re not just talking about where we end this season. We’re working on Season 2 right now, and Season 2 started with a long discussion about Season 3, because you have to tee up the next season. So, knowing what we wanted to do in Season 2, it just made the most sense that if we were going to kill a lead character, she was the one . 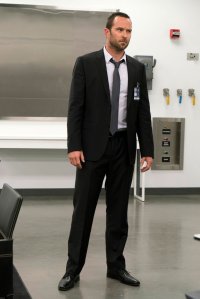 TVLINE | What kind of ripple effect will her death have in the finale?
Mayfair’s death, and Weller’s father’s revelation, completely inform the entire finale. There’s no case [of the week], so to speak. It’s all about fallout.

TVLINE | What will Jane’s dynamic with Oscar be like in next week’s final episode? I can’t imagine they’ll ever go back to the way they were.
It shatters their relationship. Jane wants to bring Oscar to justice. It forces her to make a decision, finally, between the “her” of her past and the “her” of her present, and she chooses the good guys. We’re incredibly proud of what we were able to do in Episode 21, where every side mission that Oscar had given Jane ended up [framing Mayfair]. You realize, “Wow, every B-story in the last few episodes has been leading to this moment.” Hopefully that was a satisfying moment for people. And emotionally, fans might not get the resolution they’re expecting [in the finale], but they are going to get a resolution.

TVLINE | Let’s talk about what Weller’s dad revealed at the end of the episode. Given how much his relationship with Weller has progressed this season, why upend it with this big secret?
That’s been something we’ve been moving toward since the first few days of planning this season. You’re looking for those end-of-year big twists, and we feel like we’ve laid the groundwork for that. Because [Weller’s dad] is not exactly lucid, that’s something Weller’s going to struggle with in the next episode — trying to figure out if this was true or not, or if his father had just gone crazy. But for us, Taylor Shaw has been a real focal point of this season, and this will hopefully feel like, once and for all, we know what’s true. In fact, every conversation that we’ve written between him and his father — you could go back and rewatch them, and they’re even more satisfying when you know this.

TVLINE | But the idea that Weller’s dad killed Taylor means Jane isn’t Taylor. Will the finale delve into her true identity at all?
There’s a lot of new information. Like we did in Episode 21, we’re going to tie up a lot of loose ends and answer a lot of questions [in the finale]. And new questions will be asked. It’s a big episode.

Blindspot fans, what are your thoughts on Mayfair’s demise and Bill’s big secret? Hit the comments with your reactions to Monday’s episode.