The following story contains spoilers from Monday’s Bates Motel finale, so proceed at your own peril.

Let’s get the bad news out of the way first: Yes, Norma has indeed checked out of Bates Motel — a fact made painfully crystal clear in the opening moments of Monday’s heartbreaking Season 4 finale. And the good news? As confirmed in the episode’s closing sequence, the character’s powerhouse portrayer — Vera Farmiga — is not going anywhere.

Of course, anyone with even cursory knowledge of the A&E drama’s Psycho source material no doubt guesstimated that the show’s upcoming fifth and final season would find Norma booking a room inside the far reaches of her son’s frontal lobe. But why did exec producers Kerry Ehrin and Carlton Cuse decide to play their proverbial trump card now versus in the series finale?

Below, the pair share the method behind their artful madness, reveal behind-the-scenes secrets from Monday’s stunningly written, directed and acted climax, and tease what’s to come during the “epic” final chapter.

TVLINE | Why kill off Norma with one more season still to go?
CARLTON CUSE | We wanted the final season to allow us to do our version of the Psycho lore. We will be colliding with certain events in the narrative of the film, but it would be boring to just recreate Psycho.
EHRIN | The obsessive love of Norma is what the show is going to be based on. It’s the heart of what drives it. That is going to be hugely important in Season 5.

TVLINE | And just to be clear, Vera is not leaving the show, right?
CUSE | Vera’s still very much a part of the show, she just has a slightly modified role.

TVLINE | Modified doesn’t mean reduced right?
CUSE | No. She’s existing now in Norman’s brain. In the original Psycho you don’t really know anything about Norma Bates. You just know that she’s a corpse, and you imagine that she was this shrew of a woman who berated her son into becoming crazy. But we re-imagined their relationship as this complex, intense, co-dependent love story. And that relationship continues very much in Season 5. It just has a different dimension, which is that she’s dead. [Laughs] But it’s not the end of the story. 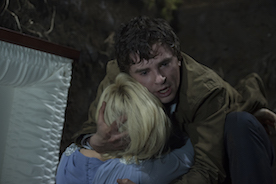 TVLINE | Was it always the plan to kill her off at the end of Season 4?
CUSE | Absolutely. But even though it was long-planned, it was still emotionally and viscerally shocking for everyone. As we were writing [last week’s episode], Kerry and I each broke down crying at various points. Mine happened to be on an airplane to Vancouver, which was very embarrassing. People were looking at me. It’s probably worth contextualizing it with Lost — I was sitting on an airplane crying. [Laughs] It might’ve made people a little nervous. Then we watched the first cut and we sat there in the editing room and were like, “Oh, good God. We actually did this.” It’s hard, because it’s one thing to do something intellectually. And then it’s another thing to [experience] it emotionally.

TVLINE | I would imagine Norman’s shrink would have an interesting perspective on Norma’s death and perhaps even Norman’s role in it. Why wasn’t he in the finale?
EHRIN | We actually had a scene in the script with Dr. Edwards where he heard about Norma’s death and he came out to check on Norman. Ultimately, didn’t fit in with the drive of the episode. We would love to bring [that character back] next season, but it’s tricky because he’s a smart doctor. And it’s not like Norman could dupe him for very long. So it becomes a balancing question, making sure everything stays grounded and believable. Also, Norman is 18. He cannot force Norman into treatment.

TVLINE | Was that the last we’ll see of Dylan and Emma?
CUSE | No.
EHRIN | No way. We love them
CUSE | We very much have a story planned for them next season.

TVLINE | But Dylan, like Dr. Edwards, is also tough to dupe. So how will you handle that balancing act?
CUSE | You’re on the right track… What we can tell you is that we’ll be spending some time with Dylan and Emma as they forge a new life. But, obviously and inevitably, he will cross back into Norman’s orbit.

TVLINE | Did we see the moment that Norman found out Norma had died? Was it when the nurse told him in the hospital? Or did it occur before that off screen?
EHRIN | We feel that at the end of [last week’s episode] when Norman turned to Norma and looked at her on the carpet and said, “Mother,” he realized she was dead. And, at that point, his brain went into overdrive to push it out. He simply could not let that in.
CUSE | The pathology of his denial is really the brilliance of Kerry’s script. Watching the ways in which Norman tries to shut down truths that are right in front of his face is what makes the final episode so compelling. 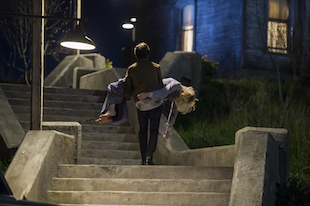 TVLINE | I kept looking closely at Vera’s chest and eyes as she was channeling dead Norma, and there was no movement. Was any of that CGI or is Vera just that good at playing dead?
EHRIN | She is the most amazing dead person. [Laughs] It really blew my mind to see how freakin’ dead she was. I don’t know how she did it. She just gets into this place and becomes so checked-out and gone. It’s really frightening.
CUSE | Especially all that stuff where Freddie was carrying her out of the grave… It’s not easy to be dead!

TVLINE | Was that really Freddie carrying her around?
CUSE | During these [four seasons] Freddie has grown up. He went from a waifish teenager to a man. So now he has the physical presence and ability to pick Vera up. He could never have done that at the beginning of the series.
EHRIN | And one of the awesome things about our cast is that they want to do all this stuff. They seem to relish really physically getting into this stuff.

TVLINE | In that same vein, I was really impressed with Freddie’s physicality in the scene where Norman trips coming down the stairs outside the house while carrying that steel frame. I’m not even sure how you can practice something like that…
CUSE | It’s very observant of you to notice that, because I think that scene was really hard to pull off. And it’s so good. And real and believable.

TVLINE | So, I have to ask. Is next season really the final season? Because A&E hasn’t confirmed that it is…
EHRIN | It’s our final season. [Laughs]
CUSE | We’ve said for a long time that we wanted the show to be five seasons and done. I think that is the plan. It’s always painful because the show is successful…
EHRIN | … and we love it…
CUSE | … and we love it. But it really should end while it’s still good. And the power of these last two episodes is all part of the five-year plan. To take those big, narrative turns can only be done if you’re moving towards an endgame. It’s what’s best for the show. We have a really great Season 5 planned.
EHRIN | It’s going to be pretty epic.