No wonder Vanessa & Co. were feeling reflective in this week’s Penny Dreadful, “Good and Evil Braided Be”: Their pasts weren’t just impacting their presents but dictating the courses of their futures as well. But which of them wanted to revisit yesterday, and which wanted to bring about the last tomorrow? Read on and find out! 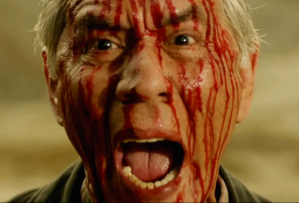 ‘I WILL FOLLOW YOU TO HELL’ | While Rusk and Ostow, and Sir Malcolm and Kaetenay, pursued Ethan across the New Mexico Territory, Hecate — much to the wolfman’s chagrin — continued to “help” in hopes that he’d eventually allow her to “liberate the beast that prowls around [his] heart” and “rule the darkess at [his] side.” (Good luck with that one, sister. He came right out and said that he hated the witch “only slightly less” than he hated the desert. And he hated the desert a lot.) At least Sir Malcolm and Kaeteney were getting along a little better. The former even defended the latter aboard a train when a roughneck informed the Apache that “Indians travel with the livestock.” If only the odd couple’s mission weren’t so dire. As Kaetenay explained, when he and Sir Malcolm caught up with Ethan, they’d either save him or have to “kill the evil that he has become.”

HOME, BITTERSWEET HOME | Upon making his way back to London, the Creature spied Vanessa on a date with Alexander (more on that in a bit), and appeared pleased to see that she was happy. Of course, his old friend wasn’t the real reason that the erstwhile Caliban had returned. In no time, he’d tracked down his wife and son and, hiding from their sight, was crushed to learn that the boy was deathly ill. In response, he mugged a gentleman and left his pocket watch for his missus to find.

SCIENCE FAIR | Though the transformation that Jekyll was able to bring about in his violent patient last week was impressive, it didn’t last — and never does, Henry explained to Victor. And that failure so infuriated Jekyll that Frankenstein had to tell him to chill. He put it more poetically than that, of course: “If you cannot endure the nightmare, you should not lie down for the sleep.” Besides, Victor was confident that, by combining his work with electricity with his pal’s research, they’d be able to bring about a permanent change in Lily. 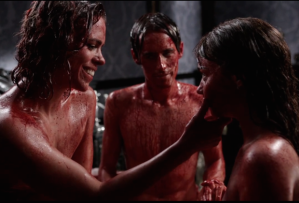 MASTER CLASS | Speaking of the former Brona Croft, during an outing with Justine, she scoffed at the suffragettes’ pursuit of equality when the real goal should be mastery. (Interesting side note: Lily also expressed disdain for all men… except Ethan. Well, and Dorian. But he’s hardly an average Joe, now is he?) Later, Dorian and Lily invited their ward to pledge allegiance to them by slaughtering the creep who’d bought her when she was 12 and whored her out. After celebrating her initiation into their club with a blood-drenched three-way, Dorian and Lily explained that Justine would help them recruit an army of outcasts for the war against humanity that they hoped to wage. “Liberty,” Lily added, “is a bitch who must be bedded on a mattress of corpses.” (What stunningly dark poetry that John Logan writes!)

THROUGH THE LOOKING GLASS | When not arguing with Dr. Seward about whether she’s really a reincarnation of Joan Clayton, Vanessa continued to unwittingly hang out with Dracula — Alexander, who confessed that his wife (Mina?) passed away a year ago. And really, aside from his being a vampire, they made a charming couple as they wandered through a carnival. However, when they got separated in a hall of mirrors — hey, why was Dracula casting a reflection?!? — Vanessa was approached by the blood-sucker’s lead minion, who foolishly revealed that she’d already met his master “long ago… in the white room.” Off this unsettling encounter, Vanessa nixed any future involvement with Alexander for his safety’s sake. (Ha!) “Take [the break-up] as a sign of something like love,” she said. Naturally, Dracula was livid that his minion had fang-blocked him. (So livid, in fact, that he fed the guy to the other vamps.) Meanwhile, Vanessa beseeched Dr. Seward to hypnotize her so that she could recall the people whose paths she’d crossed in “the white room” — her cell at the Banning Clinic. There hadn’t been many: just the attendants who took her to receive treatments and an orderly who brought her food. Right on cue, in came the orderly, and when the camera panned up, it… wasn’t Alexander, it was the Creature!

What did you think of the episode? Favorite part? Hit the comments!