This Sunday on the Once Upon a Time Season 5 finale, Henry’s quest to destroy magic had far-reaching, unexpected consequences — unleashing a new threat upon the heroes, while also “supercharging” an old evil.

In the wake of Regina losing Robin Hood, and after eavesdropping on his moms, Henry comes to fear that Regina may return to her Evil Queen ways, so he uses his power as the Author to steal the Olympus Crystal from Rumple and enlists Violet to join him on a quest (but with a bus). Regina and Emma follow in pursuit, as does Rumple, who needs the crystal to have any hope of waking Belle.

Winding up in New York City, Henry and Violet go to the midtown library and uncover other volumes of his storybook that feature stories he’s never seen before. Then, just when Henry has given up on finding anything to destroy magic, Violet spies the Holy Grail’s “twin.” And if the original chalice marked the “beginning of magic,” maybe its twin can end it? Rumple shows up, sends the kids to sleep, and then sets out to use the crystal to wake Belle in a swanky hotel room — until, suddenly, a portal opens up on the bed, and sucks away Pandora’s Box! Because meanwhile, during all the above…. 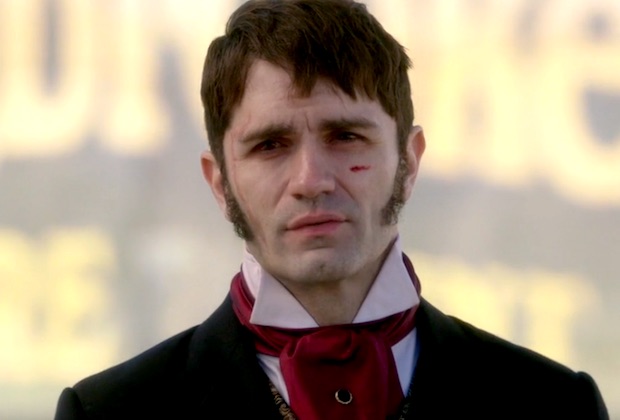 Zelena created a portal for all the Camelot types to travel home through. But when she went to close it, the portal got all wonky and sucked her, Hook and the Charmings into it, depositing them in a strange realm, across from an ominous mental hospital. After getting KO’d by an orderly named Poole, the heroes awaken inside an enchanted cage. The menacing warden suspects they were sent by the Dark One, but Snow explains that Rumple is their enemy and is currently preoccupied trying to get his expectant wife back. This intrigues the warden. Later, a meek patient that the heroes bumped into when they first landed in the realm shows up to help — by taking the broken Sorcerer’s wand to the warden’s lab to secretly fix it. But just as he repairs it, Poole shows up to grab the “doctor” and pour a potion into him — which transforms him into the warden aka Mr. Hyde.

Later, Dr. Jekyll is allowed to escape, so that he can free the heroes, return to his apartment and finish a serum he was working on, that can separate good from evil. Once he does, Poole shows up and turns the doctor into Hyde, who then injects himself with the serum, splitting him into individual people — Sam Witwer and Hank Harris. When Hyde then goes to kill Jekyll, Hook stops him, Zelena fireballs Poole and Snow uses the orderly’s magical prod gizmo to zap Hyde.

Still, there’s the matter of returning the Charmings, Zelena and Hook from the realm of Untold Stories to our world, since Henry has shut down all magic. That’s when the mystical Dragon gives them the idea that “magic is wherever you want to see it,” that the Land Without Magic actually isn’t (which is probably information we could have used a couple seasons ago!). That ultimately leads to a wishing fountain outside the library, where Henry apparently once wished that his family could be reunited; shortly after, Hook showed up to find Emma in the Season 3B premiere. So everyone gets to throwing pennies into the fountain, which gives the crystal a small charge. Henry then gives a cornball-tastic speech to “the people of New York,” encouraging them to “bring magic back” or some such thing. And once they all pitch in their pennies, a portal forms in the fountain, through which the Charmings, Hook and Zelena return — and Rumple escapes, to the other real.

There in the Land of Untold Stories, Rumple confronts Hyde, wanting his wife back. Hyde says he has information on how to wake Belle, so let’s make a deal….

Back in New York, 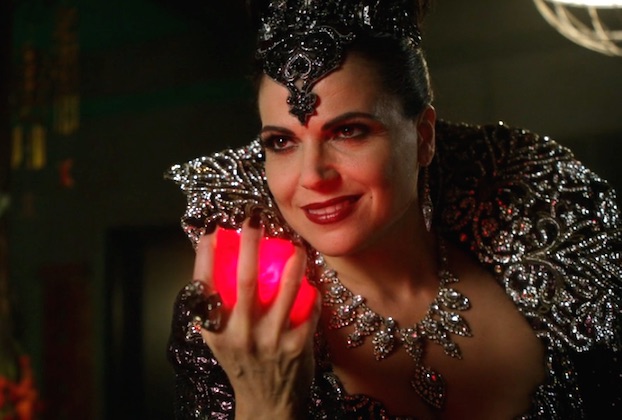 Snow gets the utterly misguided idea to his Jekyll’s serum to “remove” the Evil Queen from Regina, and sure ’nuff, Regina splits into her Ann Taylor and Bob Mackie selves. With Emma and Snow’s encouragement, Regina destroys her evil side, by ripping her very black heart out.

When everyone returns to Storybrooke, Henry realizes that Violet’s dad is actually from Connecticut(!), and thus she gets to stay around, and they share their first kiss. But then, after Regina untethers magic from the crystal, who shows up on Main Street but Mr. Hyde, proclaiming, “Storybrooke is now mine,”
as part of the deal he made with Rumple. And he brought along all his “friends” from the Untold Stories.

Meanwhile back in New York, the Evil Queen materializes at The Dragon’s shop, scoffing that while Regina may have won the battle, the battle between dark and light “is a war,” and, “The queen is back!”

What did you think of the Season 5 finale, the introduction of Jekyll and Hyde, the Two Reginas and, oof, Henry’s library speech?