Michael Strahan wanted his final installment of Live With Kelly and Michael to feel pretty much the same as all the other episodes from his four years at the hosting table.

“I don’t like a big to-do about it,” Strahan said to Kelly Ripa, early in the hour. “I think that we come out here every morning, we do our host chat, we make people laugh. We do what we’ve got to do. I think that’s what we need to do… have fun and get on with our show.”

And with the exception of a series of “Flashback Friday” videos — featuring quick and silly glimpses of Strahan and Ripa dancing and goofing off – the exiting co-host got his wish.

“It’s bittersweet. I’ve done this for four years. This is a moment I didn’t anticipate, being here, at least at this point,” Strahan said, referencing his accelerated exit date, after Ripa asked how he was feeling. “But, it’s here, and we’re gonna enjoy it. I’m not dyin’. I’m still in the family — and still available to come back if I’m ever called to co-host.”

“You can fill in for me,” added Ripa, leaving me to wonder if she was nixing the idea of ever again sitting next to Strahan (professionally speaking).

Mostly, though, the co-hosts maintained the same goofy chemistry that made their run so successful. “We want to remind the audience there is a run on discounted merchandise,” Ripa goofed, while holding up one of the show’s signature mugs. 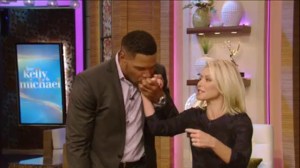 Toward the end of the hour, Ripa introduced a “This Is Your Life” highlight reel split into segments focusing on Strahan’s signature laugh, silly costumes, terrible accents, athletic prowess, and emotional highlights. When it ended, he kissed Ripa’s hand, and the duo partook of an extended hug.

For their final segment, Ripa presented Strahan with a bronzed pair of high-heel shoes he wore for a Halloween episode, then toasted him with champagne and said she looked forward to watching him every morning on Good Morning America.

Unfortunately for Strahan, the final seconds of his farewell speech were interrupted by a rendition of Bill Withers’ “Lovely Day” — yep, he got played-off, Oscars-style, on his own show! But for the record, here’s the transcript: “I just want to say it’s very bittersweet for me and I just want to say thank you to everybody. It’s amazing: you come here and you guys let me into your homes for the last four years everyday. I didn’t know what to expect coming from sports to daytime television and you guys opened up your hearts to me and opened up your homes to me and it has been so overwhelming the response that we’ve had over the last four years that you guys have loved this show. It means the world that you give us an hour of your day, and what you don’t realize is we get more from that hour than you really do. We sit in front of a live audience who I always say during our commercial breaks that they’re co-hosts of the show; the energy that they bring really makes this show work, and it is not about myself, it’s not about [Kelly], it’s about everybody here. We have an incredible staff here, from the producers to the staff to the crew, they make sure we’re always prepared to come out here and put on a great show for you guys and I gotta say we love you, we appreciate you… and Kelly, you are the best. I love you, baby. I love you.”