WGN America’s Underground wrapped its largely excellent freshman run on Wednesday night with an hour that derailed several fates while (fatally) sealing at least a couple of others.

With slave catchers lurking en masse around the Hawkes’ home, Noah and Elizabeth partnered on a plot to set loose dozens of slaves from the local marshal’s office, as a means to “throw money on the streets” and create chaos. While they were doing that, August showed up to ask John, being Tom Macon’s brother, to help get an advance on his payday, so he can get Ben the surgery he needs after being stabbed by (a hallucinating) Rosalee. Hearing that someone was upstairs, bound-and-gagged Kyle attempted to make a ruckus, to signal his captivity underneath the floorboards, but Rosalee quickly clocked him. August seemed to shrug off the noise and leave for the bank, but actually resurfaced moments later to catch Rosalee and John in the hideaway with Kyle. John kicked loose a support, collapsing the floor atop August and affording them an escape.

Later, John returned to confront Kyle — and disclose the fact that he and Elizabeth have elaborately framed him to look like the local Underground Railroad helper, by digging a hideaway under his home and planting paperwork in his desk. John then declared it his “duty” to kill the slave stealer, and suffocated his nemesis.

Noah’s escape was halted when he got KO’d by none other than Patty Cannon (Army Wives‘ Bridgid Brannagh), leader of the slave-catching consortium; he wound up behind bars alongside August, whom Patty had arrested for killing a few of her men — white people, which is a big no-no in their line of work.

Ernestine, poor Ernestine, was sold quite a bill of goods by a seemingly sincere Tom, who planned to move away with her to D.C., and live a life where she can have whatever she wants. But in a shocking but not unexpected turnabout, she lynched him in his own cellar, as punishment for what he did to Sam. At episode’s end, we see Suzanna Macon and ‘Stine in a coach together, where Tom’s widow explains that she bears no malice for the house slave laying down with her husband, or for bearing his children, But for raising the Macon kids to see her as their mother, ‘Stine must be punished. So, in perhaps’ the finale’s most tragic twist, Suzanna drops Ernestine off at a slave auction, to be thrust back into the system. 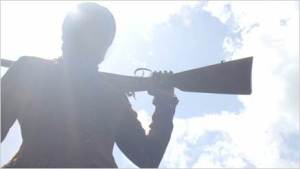 are voiced over by Rosalee, as she related the Macon 7’s tale to Chris Chalk’s William Still, the “father of the Underground Railroad.” She earlier had been saved from August by a pistol-packing Elizabeth (and then put a bullet in the bounty hunter’s belly prior to his jailing). After accounting for everyone, from Noah to Pearly Mae, Moses and Boo to Zeke, Henry and Cato — who’s alive! — Rosalee sets out to do more for her people, by training to be a slave stealer… under the tutelage of a young Harriet Tubman, as seen in the clip below.

Though some of the main characters’ stories seem to have met one end or another, the producers tell our sister site Deadline that “a lot” of the Season 1 cast will return for Season 2, and in “in an entirely different context than we saw them before.”