If your jaw met the floor as this week’s NCIS came to a close, know that Michael Weatherly was equally surprised to see Ziva David’s Israeli farmhouse go up in (a whole lot of) flames. “It is a very provocative image isn’t it?” the actor shared with TVLine on Wednesday.

With his final appearance set for the Season 13 finale airing May 17, “As I got myself into a head space of what’s going to happen to the character, to all the characters, I didn’t really know how I was going to feel,” Weatherly continued. “But it all started with that moment, with that exploding farmhouse, because when we shot that scene I had not read that scene. They started rolling the [breaking news report] and I was watching it for real! That was Michael Weatherly trying to figure out, ‘Wait. Wait. That’s where Cote [de Pablo] and I shot that scene [in Season 11’s second episode, “Past, Present and Future” — aka de Pablo’s own NCIS swan song]. So I was as shocked as anyone. And then as we went through shooting the last episode, every day was a series of electric shocks.”

“Mission Impossible-style, the fuse has been lit” by that alarming inferno, Weatherly teases. “You’re going to be very surprised by a lot of what unfolds next week.”

Did Weatherly relay any ‘druthers to NCIS showrunner Gary Glasberg when he gave notice last summer, with regards to how he’d like (or hope) to see DiNozzo go out? In a word, no. “I’m a big believer that there are things you can control and things you cannot control, so that was outside of the sphere of control as far as I was concerned,” he said. “I’ve really enjoyed the whole ride on NCIS and all the different styles that the show has taken on over time, and I wanted to leave it up to that creative team to do what they wanted to do.”

“I will reveal that there was one particular line of story that I was made aware of that actually completely changed — disappeared really — and became something else,” he adds, offering no specifics. “So I know that they were playing with stuff all the way along. The key for me [in deciding to leave] was to make sure these guys had enough time to do whatever they creatively thought was going to serve the show the best. I love Tony DiNozzo, but more importantly I love NCIS, so that’s always a priority. His departure has to serve that primarily.”

Reflecting on his 13-year run during the conference call, DiNozzo hoped that Tony is regarded fondly, and more importantly as a fleshed-out TV character. “I kind of take affront when people reduce him to an ‘oafish, overgrown frat boy,’ because I think that he is a complicated and layered guy, in the sense that he gets to do all these things” such as action, family drama and “great romantic comedy/badinage/ banter stuff, especially with Cote de Pablo.” Along those lines, he draws comparison to the late Wayne Rogers’ Trapper John on M*A*S*H, another long-running TV drama that continued on in the wake of an original cast member’s exit. “When NCIS is cranking out Season 20, people will be like, ‘Remember that guy who used to sit at that desk…? Yeah, he got old,'” Weatherly reckons with a laugh.

Asked about the hardest part of his years as DiNozzo, Weatherly ultimately pointed to the uneasy feeling that led him to part ways with the series, to pursue other acting and producing projects as well as spend more time with his family.

“You can’t be in that No. 2 slot [on Gibbs’ team] forever. That started to feel constrained to me,” he offered. “McGee is looking at him and saying, ‘When you get out of here I want to be No. 2,’ and Gibbs is looking at him like, ‘Youre kind of hanging around. Have you got things you want to do?’ I always appreciated the gift of the job, but the hardest part of the whole experience was thinking, ‘Oh, no…. I think it’s time I have to leave.”

And when the clock strikes nine next Tuesday night, how will viewers be left feeling about it all?

“You can never predict those things — that’s like me trying to tell you the weather three-and-a-half weeks from now,” Weatherly hedged. “I do know that it’s been an extraordinary run-up [to the finale], and as I watch these clips [of the finale] that are sent around, it’s really become very emotional for me to watch this transition of Tony DiNozzo off the show.

“I’m sure that out of the tens of millions who watch the show around the world, certainly there will be some different points of view,” he allowed. “But if people share my feelings about it, I think [the reaction] is going to be overwhelmingly positive.” Echoing one of the finale’s talking points with a wink, he added: “I think Gary and CBS and everyone has really put together a ‘powder keg.'” 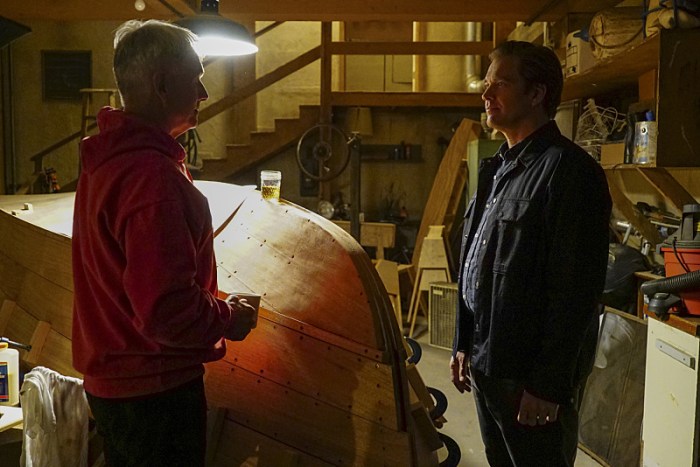