Confession from one Empire fan to another: I never really cared that much who won the ASA for Song of the Year.

Apparently, neither did poor, tragic Freda Gatz — seeing how she didn’t even wait for the afterparty to whip out her gun and go after first-time nominee Lucious Lyon, making the statuettes kind of an afterthought in the show’s fictional world, as well as for viewers of Fox’s hip-hop soap opera.

Question, though: What kind of jacked-up kudos-fest would still announce its winners while its most nominated artist fought for his life on the operating table? Tacky! 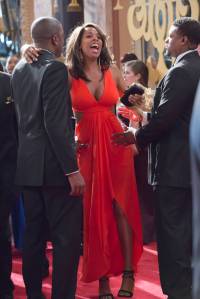 In the end, Lucious and Jamal both lost the big prize — to some chump named P.O.C. — but Jamal lost even bigger when he got caught in the crossfire and took a slug to the stomach. Oh, and did I mention his fine-ass, sex-on-a-self-hating-stick boyfriend didn’t even accompany him in the ambulance?

Next year’s ceremony just has to be better — especially if Aunt Carol and Grandma Leah are locked away inside Lucious safe room, with Juanita sliding her unseasoned treats under the door.

Allow me to recap the action of Season 2, Episode 17 — while also offering a slow-clap for the enthusiastic drummer in the Lyon family band. She’s a staaaah, I’m tellin’ ya! 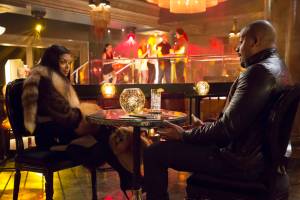 NO LONGER HER SISTER’S KEEPER | Oh, Cookie, couldn’t you throw Carol a bone every now and then? When Carol models her ASAs dress, Cookie tells her she looks “like a cheap prostitute” and dismisses her, then later intercepts Carol’s date with former Philly cop Tariq. Cookie can smell the Fed all over him, and — while wearing metal-tip gloves (#FTW) — warns him not to cross her family. Tariq goes nuclear, telling Cookie that Lucious killed her cousin Bunky. But Cookie always drops the last mic: “Watch out – my sister has herpes. Hope it’s not too late.” Carol doesn’t take too kindly to her sister’s interference, but when Cookie senses her sister’s fallen off the wagon, she kicks her out of her apartment — and out of her life. Too bad the “washed-up crackhead” crashes the ASAs later and spills the beans to Freda that her father died by Lucious’ hand. (More on that in a moment.) 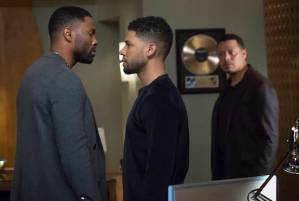 CANCEL THOSE FATHER’S DAY FLOWERS FOR LUCIOUS | Jamal and D-Major’s flirty-sexy-closeted stuff continues — and the ASA musical director wants to produce the rising artist’s next album, “Unless I ain’t big enough for ya.” (Oooooooh, I’m all about that double-entendre life!) Later, though, D-Major explodes homopobically when Lucious walks in on his near-kiss with Jamal. “I see D-Major’s still on the DL,” offers Lucious, who grows increasingly more foul as the conversation continues. “Everybody knows how he likes to turn rich boys into his little bitches,” Lucious offers, before adding the kind of imaginative detail no father really needs to be envisioning with his own son: “I bet he’s on top.” Jamal, though, is not here for the disdain, especially when he sees Jamal “crying like a little bitch over your mother.” That’s an insult that stings, but like Cookie, Lucious always has one more bullet in his gun. “The day you die from AIDS, I’m gonna celebrate.” I literally have no words. Let’s just pause for a moment and let the bile return from our throats back to our stomachs where it belongs.

THE OLD AND THE DANGEROUS | Lucious’ evil mama Leah spends the hour seething over Lucious’ lying about her suicide and trying to convince Andre to take her to the ASAs. “Nobody’s gonna look sideways at a little old lady.” Lucious (who I hope is paying Juanita to drop all the dimes) sends Thirsty to imprison them in his safe room for the duration of the ceremony. Too bad he didn’t stock the room with a week’s worth of unseasoned meals and water — and a flush toilet! 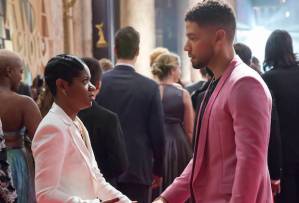 EVERYTHING GOES TO HELL AT THE ASAS | Jamal — still furious about Lucious’ comments and now armed with Cookie’s truth bomb about how she snitched-out and Lucious killed Freda’s dad Frank — tells the media he’s shelving his long-awaited Black and White album — and that “Chasing the Sky” will be “the last time you’ll see me on stage with my family.” He then tells Freda to “get away from Empire,” that he’ll hook her uup with another label — as if he somehow doesn’t know she hasn’t been burned repeatedly by his family and that she doesn’t have a violent temper. D’oh! When drunk Carol blows up over Freda’s invitation to call her an Uber instead of sneak her into the ampitheater, she spills the tea about Lucious’ culpability in Frank’s death. And boom-boom-boom-boom, Freda grabs a gun from security, points it at Lucious, but winds up hitting an interceding Jamal. 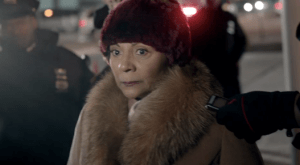 MEANWHILE, BACK AT THE HOSPITAL | Cookie can barely look at Lucious — knowing how he hurt their son, and how their son is now on the operating table, fighting for their life. And it’s almost as if he’s negated all their episode-long flirtation, culminating with him giving her a diamond bracelet and asking her to be his date — since they’d always talked about the ASAs back when they were selling CDs (and such) out of a car trunk. She knows, though, that deep down, he wants to do right by his family, and he’s so moony-eyed for her that he doesn’t notice Leah (whose been brought to the hospital with Jamal) sneaking out the the assembled media, clearing her throat and… we’ll have to wait til next week to see if she spills the beans.

OMIGOD! SHOES | Rhonda doesn’t come right out and accuse Anika of pushing her down the stairs, but she does ask about her Louboutins when Anika pops into Empire HQ and is all, “Hey girl, why are you avoiding me?” Later, Tariq brings Boo Boo Kitty in for questioning. Will she spill, or is she ride-or-die with the Lyons?

Your turn. What did you think of this week’s Empire? Sound off below!