After shots were fired during Wednesday night’s Chicago P.D., we got our first taste of the Windy City-set franchise’s likely next offshoot, Chicago Justice.

The crux of the episode involves a shooting, in which Roman is seriously injured. Burgess runs after the assailant and shoots him in the back multiple times. But it’s hardly case closed after that. The young man, Michael Ellis, is, by all accounts, an Eagle Scout. Even worse, the police have no eyewitnesses and can’t find the gun to tie him to the incident. So a firestorm erupts as the city’s population protests the police firing at an innocent boy.

Enter steely ASA Peter Stone (The Player’s Philip Winchester), who can’t quite figure out who will be tried, Ellis or Burgess. He’s got pressure on him from all sides. The State’s Attorney Mark Jefferies (Rocky‘s Carl Weathers) is concerned he won’t be reelected if this goes badly, while Voight doesn’t think Stone’s got the same hunger in his eyes as when the prosecutor put him behind bars. “That’s because the case on you was a slam dunk,” Stone replies. Zing!

Later, the team catches a break when they find the gun, as well as a photo of Ellis holding the same type of weapon, and learn that he ranted about the police to a friend. But there’s a weakness in the ASA’s case that Ellis’ defense attorney Shambala Green (guest star Lorraine Toussaint, reprising her Law & Order role) is more than happy to exploit. Video footage of Burgess and Roman canoodling in their patrol car is shown in court — and yes, Ruzek sees it as his ex-fiancée takes the stand. (After the detective sweetly tried to comfort her earlier in the episode, that had to be a gut-punch for him.)

Eventually, Ellis’ motive becomes clear to Stone with the discovery that the kid’s “uncle” had been arrested by a racist cop and then committed suicide in prison the day before Roman was shot. With that nail in her case’s coffin, the defense attorney suggests a plea deal: just four years in the slammer. The SA wants to take it in order to avoid an acquittal or a hung jury, but Stone leaves the final decision to Burgess and Roman. Though she’s against it, he begrudgingly gives in. “We’re all sleeping in our own beds tonight,” he reasons. “Let the city sleep, too.”

Winchester promises to be a compelling lead, but let’s be honest, this episode belonged to Marina Squerciati, whose Burgess was put through the emotional wringer. The spinoff’s ensemble also includes Justified‘s Joelle Carter (as investigator Laura Nagel), Heroes Reborn‘s Nazneen Contractor (ASA Dawn Patel) and newcomer Ryan-James Hatanaka (investigator Daren Okada), but they don’t get much to do in the hour. (Did Contractor even say anything?) With such a heavy case, there also wasn’t much exploration of the work or personal dynamics within the legal offshoot, but hopefully, that will change, should Justice be picked up.

What did you think of the proposed series? Vote below to let us know whether you’ll be adding yet another Chicago show to your TV schedule. 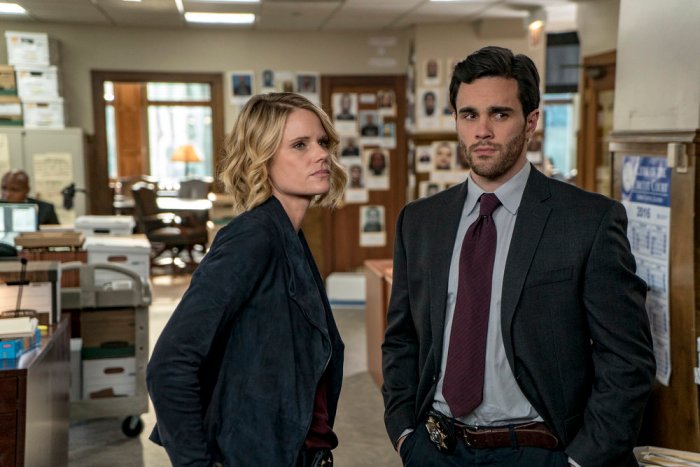