TNT is keeping Animal Kingdom in its cage a little longer than anticipated.

Originally scheduled for June 7, the cabler’s upcoming Ellen Barkin vehicle will now launch with a two-hour premiere on Tuesday, June 14, at 9/8c.

Animal Kingdom stars Barkin as the matriarch of a Southern California family that is prone to indulgence and excess, funded by criminal activities. When 17-year-old Joshua “J” Cody’s mother dies of a heroin overdose, he moves to the beach to live with the law-breaking clan. Scott Speedman (Felicity) and Shawn Hatosy (Southland) also star.

* Speaking of Top Gear, former hosts Jeremy Clarkson, Richard Hammond and James May have named their upcoming Amazon Prime series The Grand Tour. Launching this fall, the car show will feature short films shot in different locations around the globe, with each episode hosted in a new country.

* British actor Jack O’Connell (Skins) has been tapped to star in Godless, Netflix’s Western drama about a menacing outlaw who is terrorizing the West as he hunts down his son-like partner-turned-mortal enemy. Per THR, O’Connell will play Roy Goode, the aforementioned partner who split from his father figure when he could no longer stomach the man’s behavior.

* AMC has released the key art for Ride With Norman Reedus, its upcoming reality series (premiering June 12) in which the Walking Dead star crosses the U.S. on his motorcycle. Check out the official poster below: 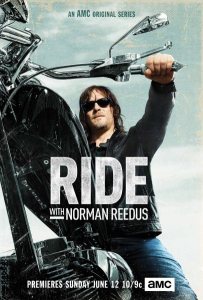