We have a feeling onetime “Weekend Update” correspondent Stefon would have liked Tuesday’s New Girl finale — because, man, it had everything.

A wedding. An engagement. A break-up. An exchange of “I love you”s that was rudely interrupted by food poisoning. A conga line in the aisle of an airplane. Winston in the buff.

Over the course of two episodes, the Fox comedy brought each one of its central relationships into new, somewhat terrifying territory, before wrapping things up on a bittersweet note (thanks to an ill-timed hora). Herewith are the highlights from Tuesday’s two-part Season 5 sendoff:

* When a tiny velvet box containing a massive engagement ring falls out of Sam’s jacket, Jess goes into panic mode at the idea of her beau proposing… but she can’t put her finger on the reason for the freak-out, and she’s a little indignant that Cece would even suggest she doesn’t want to marry Sam. But later that night, when Sam pulls Jess aside for a serious conversation and seems on the verge of popping the question, Jess loses her marbles and decides to stall by playing several rounds of True American with everyone in the loft. (Someone, anyone, type up an official rule book for this game, won’t you?)

Naturally, Sam picks up on Jess’ evasion tactics, and when he finally gets a moment alone with her, he at last tells her… that he wants to break up. (Oh.) As it turns out, Sam is in love with med school pal Diane — how very Cheers-y! — and although he cares for Jess deeply, he wants to pursue a relationship with The One That Almost Got Away. But he does leave Jess with a parting gift as he exits her loft, and her life: a moment of brutal honesty in which he informs her she’s still in love with Nick.

* Oh, and that engagement ring Jess found? It really belongs to Schmidt’s mom, Louise, who had planned to propose to longtime girlfriend Susan that weekend. Thanks to Jess, the surprise doesn’t play out quite the way Louise had anticipated, but the engagement is tooth-achingly sweet, regardless. 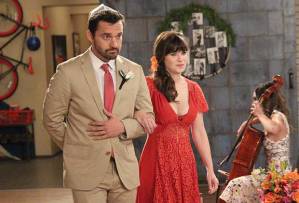 * After telling new girlfriend Aly that, much like Cece, she’ll make a beautiful bride someday — which caused Aly to abruptly run out of the loft — Winston spends the first half-hour agonizing over whether he came on too strong with his lady. But when he goes to Aly’s apartment later that night and clarifies that he doesn’t intend to propose anytime soon, Aly reveals that she only ran out of the apartment because she came down with food poisoning. She’s not mad at Winston at all — in fact, she loves him! (And also needs to get to a toilet, stat.)

* On the morning of the wedding, Schmidt decides to take an impromptu flight to Portland, in an effort to convince Cece’s mom to come to the ceremony. (Despite the decent poker face she’s maintained all season, Cece is devastated by the knowledge that Schmidt will have two moms at the wedding, while she’ll have none.) But because this is New Girl — and, more importantly, because this is Schmidt — his travel plans get derailed by faulty landing gear on the plane, which leaves him stranded on the tarmac for hours.

But all of Schmidt’s efforts haven’t been in vain. It turns out that Cece’s fiancé has been leaving her mom quirky voicemails every week for a year, describing how much he loves Cece (and even though most of the messages aren’t well-executed, they’re crazy-romantic nonetheless). Cece’s mom finally admits, “I am delighted for you to marry this man,” and Schmidt, overcome with emotion, tells Cece that they can have the reception without him, even if that means getting married at city hall later in the week. But rather than let Schmidt miss his own wedding, Jess & Co. give him an adorable front-row seat to the party via video chat. (It pained me to watch Cece smash a piece of wedding cake onto her iPad, but who am I to kill the buzz?)

Later that night — much later — when Schmidt finally returns home from his air-travel saga, he finds that his roommates waited up all night for him to get back. With the help of a cello player, a ton of rose petals and the trusty Douchebag Jar, Cece and Schmidt have their lovely wedding ceremony in the middle of the loft — but we still don’t learn Schmidt’s first name. Rude.

* That only leaves us with the unresolved matter of Nick and Jess. Though she tries to deny that she’s got any lingering interest in her ex, Jess is forced to confront her feelings when Reagan shows up at the loft, having hopped a last-minute flight to attend the wedding with Nick. At the reception that evening, Reagan asks Jess why she and Nick went their separate ways, romantically — and even as Jess is explaining the fundamental differences that derailed her relationship with Nick, it’s clear that she’s willing to put those disparities aside if it means getting a second chance with the guy.

But it’s too late (to apologiiiiize). Before Jess can do anything about her unresolved feelings for Nick, Reagan makes her move, opting to take a chance on a full-blown relationship with him, even from a distance. (In the episode’s most heartbreaking moment, Cece sits down next to a crestfallen Jess, who communicates her Nick-related heartache by simply saying, “I…” and trailing off.)

The final minutes of Season 5 find Jess and Nick getting a moment alone, at which point Nick explains that he’ll be spending three months in New Orleans with Reagan as she adjusts to her new job. (How convenient — that’s exactly how long TV’s summer hiatus lasts!) He thanks Jess for convincing Reagan to take a gamble on dating him, and Jess, frustrated with Nick always putting himself down, yells at him to recognize how incredible he is. But before either of them can say another word, the rest of the wedding party bursts into the room and sweeps both of them up in the hora. Don’t you just hate that?

Your turn, New Girl fans! What did you think of the Season 5 finale? Grade it in our poll below, then hit the comments to back up your choice!