This week on ABC’s Agents of S.H.I.E.L.D., as Hive took another crack at his plan to manufacture Inhumans, an unexpected return was tempered by a bittersweet goodbye.

So, no open letter to ol’ Hive this week. Because as sloppy as his “Plan A” was last week, his second stab at reverse-engineering Inhuman servants at least produced results this time around, as cosmetically challenged as they may be. But hey, as the saying goes — “a face only a mother (or father) could love.”

Besides, Hive draining Daisy of her Kree-tinged blood in the name of siring their “children” was more of a background story this week, where the focus instead was on  Lincoln’s plot to “escape” from the S.H.I.E.L.D. base and reunite with Daisy. This write-up would have read quiiiiiiiite differently if that actually turned out to be “Electro-Boy’s” intent — I for one was screaming things at my iPad when it looked like he was walking into a neon sign-emblazoned trap — but the fake-out eventually unfolded quite nicely, especially since a favorite such as May was masterminding it all. And as much as I was yelling up until that moment, I quite possibly literally clapped when I realized that the QuinnJet arriving at Hive’s lair was not manned by a lovelorn Lincoln but instead the monstrous Lash, who proceeded to maul Hive’s newborn goons.

Hive himself took quite a licking from Lash, but presumably survived, after Andrew’s Inhuman alter ego put a pin in the pummeling to tend to drained Daisy and “pull” out of her the “sway” infection — “Now you’re free” — and place her in the the jet to return to the team. Lash’s journey, however, would end on that noble note, after he was fatally gutted by a “charged” chain whipped through him by nickname-needing James. Live by the Lash, die by the lash. Afterward, the team surmised that Lash wasn’t here to kill Hive but save Daisy — to which Jemma said, “That wasn’t Lash” scoring the big save, but Andrew inside, as a forlorn May sat beside the creature’s lifeless body.

As for Hive’s endgame, FitzSimmons reported that he could infect a huge chunk of the human population in one fell swoop if and only if he had means to disperse it high enough in the atmosphere. Oops, Talbot shares with the gang — a warhead is actually what Team Hive recently stole from the ATCU. 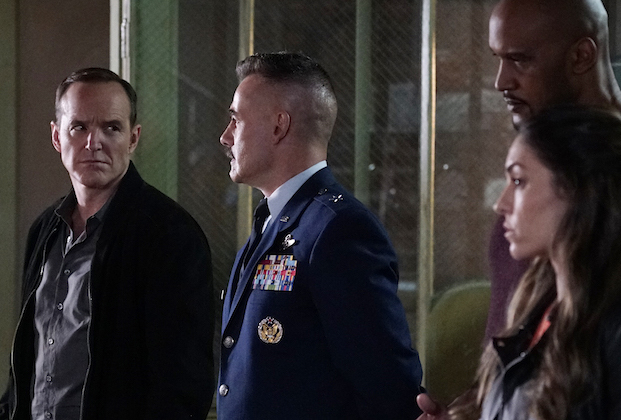 If you were taking a drink each time that Captain America: Civil War‘s Sokovia Accords were referenced, well, it was nice knowing you. Coulson and May were among those who bristled at the notion of “registering” their Inhuman allies with the government, no matter how many layers of super top-secrecy Talbot promised the list would be protected by. Talbot’s presence throughout the episode was highly entertaining, marveling, barking and quipping as he does about the crazy, loosey-goosey antics that Coulson (sometimes seemingly) gets caught up in. And I’d be lying if I said I wasn’t now torn between emulating Adrian Pasdar’s extreme b-ilevel hairstyle versus Michael Raymond-James’ over on Game of Silence.

Lastly, I must give a shout out to Natalia Cordova-Buckley, whose Elena/”Yo-Yo” has become one of my favorite things about Season 3. Every scene she is in, Elena brings an earnest, genuine soul that is needed amidst this team of steely, jaded-by-Hydra badasses. I worried that, given the floating necklace clue in the outer-space flash-forward, this episode was building Yo-Yo up further only to rudely rip her away from us in next week’s season finale — especially when in that closing scene it looked like she was paying Mack a(n overdue) booty call. Instead, all of our concerned eyes are now on Mack, to whom she gifted the telltale cross.

What did you think of the episode “Emancipation”?