The Good Wife creators Robert and Michelle King have said time and time again that their story was, at its heart, about “the education of Alicia Florrick.”

In the wake of the sometimes brilliant series’ disappointing finale, here’s hoping the Kings learned something, too: It’s perilous to write toward a specific visual endgame without laying the groundwork to support it.

Consider this passage from the Kings’ open letter to fans, posted on CBS.com on Monday morning, that explained their show’s final hour: “We wanted this series — a series that stretched over 156 episodes — to have some shape, some structural meaning. So after we realized we wouldn’t be cancelled after 13 episodes, we started to devise a vanishing point we could write toward. That structure, in our minds, was simple. The show would start with a slap and end with a slap. Each slap would involve Alicia. This would be the bookend. She would slap someone who victimized her at the beginning of the series; and she would be slapped by someone she ‘victimized’ at the end.”

Here’s the problem, though. In their failure to make Alicia’s betrayal of Diane feel truthful, meaningful or even plausible — and in littering their final spate of episodes with superfluous, unresolved story arcs — the Kings never made that slap feel truly earned.

And as TVLine readers’ average D+ grade for the finale shows, the end result wasn’t a profound and tragic revelation about a complicated heroine, but a tennis ball plopping against the net at the exact moment we were expecting an overhead smash.

For starters, too much of Season 7’s latter half — and almost the entirety of the finale — was built around the fate of Peter Florrick… a man for whom Alicia has felt ambivalent at best over the last few years. (I’ll admit I LOL’d at a reader’s sarcastic but spot-on comment on my recap of Sunday’s episode: “50 minutes dedicated to the entire Peter case. Yeah, that’s how I wanted them to wrap up seven seasons of The Good Wife.”) 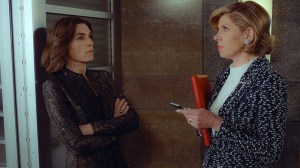 Heck, Alicia herself told Diane she wasn’t even sure she cared if Peter was guilty or innocent, whether he went to jail or not, midway through the finale (right after she learned that tests on the missing bullets pointed to Richard Locke’s guilt, and undercut Peter’s defense that he didn’t push for a mistrial to help the son of his wealthy donor). So how are we supposed to believe she’d suddenly feel a surge of passion to defend him — to the point where she’d publicly humiliate her law partner in open court just for a chance to sway the jury?

The Kings wrote in their open letter that “Even [Alicia’s] decision in this last episode — the one that resulted in Diane being hurt — came out of her parental need to keep Grace from following in her path. She didn’t want Grace to put her future on hold in order to stand by Peter.” That logic, however, was never made clear in their script, not a huge surprise considering Alicia’s argument with Grace about her decision to defer admission at Berkeley lasted all of 34 seconds.

What’s more, the foundation of the Alicia-Diane showdown was murky at best, ridiculous at worst, and riddled with questions that never got answered. Wasn’t it always a tad too convenient that of all the ballistics experts who could’ve done the preliminary on the years-old Locke case, it turned out to be Diane’s husband? Why did Diane take Peter’s case when he royally screwed her out of a judgeship? Given Alicia just regained her partnership at Lockhart-Lee (or whatever they planned to call it) — and knowing a law partnership typically requires a sizable capital investment – would Alicia have so capriciously pushed Lucca to expose Kurt’s affair with Holly in court… and irreparably damage said partnership? (At some point, Alicia’s firm-hopping habit would give her clients some pause, no?) And wouldn’t Lucca have had some hesitation in the matter, considering the risk of losing her job for making such a public accusation against her boss’s husband? Frankly, even Lucca’s argument — that bias from an affair may have caused Kurt to change his testimony — seemed too flimsy to cause a complete change of heart over whether or not to allow the jury to consider the damning new ballistics test.

Even if you buy all of the above leaps in logic, think about this: As my colleague Michael Ausiello asked this morning on Twitter: Why did Diane choose to deliver her slap at Peter’s end-of-episode press conference? Wouldn’t she have done it in the courthouse or back at the office after Kurt’s cross-examination? “The bookend doesn’t ring true if the steps leading up to it feel inauthentic/contrived,” Mr. Ausiello noted, and I wholeheartedly concur.

Look, we’ll always have “Hitting the Fan” — hands down, one of the greatest single dramatic episodes in TV history — as a high mark in seven years of bold, ambitious storytelling choices. It just so happens that the Kings’ final twist missed its mark, played like a stale Twinkie at the end of an otherwise lovely seven-course meal. Hopefully for them — and for the show’s loyal fans — time and a little perspective will fade this stinging handprint from The Good Wife‘s overall legacy.

What did you think of The Good Wife‘s final slap? Did structure get in the way of storytelling? Or were you satisfied with the conclusion? Take our polls below, then sound off in the comments!