In this week’s thrilling Penny Dreadful, Dorian and Lily drew blood the fun way, Ethan reminded us who let the dog out, and, as Dracula learned more about the object of his obsession, Vanessa got to know Alexander better. How much better? And was it “better” enough? Read on!

‘NOW YOU ARE MINE’ | As “Predators Far and Near” began, Dorian and Lily violently rescued a young girl named Justine from an underground club where she’d have been butchered for the entertainment of the rich and perverted. Eternally grateful, Justine offered to do anything that her saviors wanted… even if that meant forgiving the men that had used and abused her. Of course, that was the last thing that the erstwhile Brona desired. On the contrary, she told her new playmate (before sealing the deal with a kiss), “we shall have, my dear, a monumental revenge.”

Later, after Dr. Jekyll took Victor to his underground lab in bedlam for a demonstration of his skills, Frankenstein — his hopes for Lily’s salvation renewed — spent an evening crying quietly under his favorite monster’s window. When she spotted him, she did the (for her) unthinkable: showed her creator mercy. Rather than, say, murder him where he stood, she rather tenderly assured him that he’d get over her in time. However, he mustn’t return. “You will not like what I’m becoming,” she warned. (Dunno about you, but I love what she’s becoming.) 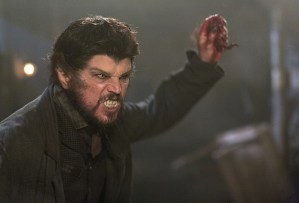 ‘THE WOLF IS RETURNING TO HIS DEN’ | Though, following the traincar massacre, Federal Marshall Franklin Ostow was more than ready to go after Ethan without Rusk, the inspector refused to give up, insisting that he’d step back only after he was able to “bring Mr. Talbot to heel.” (Why not get him to roll over and fetch while you’re at it? Seems about as likely.) At least Rusk knew where Ethan was headed: the Talbot Range. And, since Hecate was eavesdropping, she now knew, too.

Meanwhile, as Sir Malcolm and Kaetenay crossed the sea, the Apache smoked a pipe and recited an incantation in order to contact Ethan, who, to put it mildly, was not happy to receive the “call.” In fact, the wolfman furiously explained that he was headed home to reunite with his father. “I’ll end it with him,” Ethan said, “just as one day I’ll end it with you.” Though he added that he was “not the man you knew,” Kaeteney replied that that was fine, he was “the Apache I need.” (Anyone else a little lost in this plot?)

That night, while Ethan’s “rescuers” were parked at a tavern, a full moon rose, and suddenly, it was the Mariner’s Inn Massacre all over again. The leader of Papa Talbot’s men almost got the drop on the werewolf, but Hecate materialized to save his tail. “How I’ve missed you,” she said. (And even in creepy form, she made it sound pretty sexy.)

‘WHAT’S BEYOND MURDER?’ | “Let’s start with sin,” said Dr. Seward as she began to record her latest session with Vanessa. Has the patient ever sinned? Ha, replied Miss Ives. “How long is your cylinder?” Long enough, apparently, because by the time the session was over, the patient had tearfully recounted her whole sad story, dating all the way back to her betrayal of Mina. “We will find our way through this,” Dr. Seward promised. Then, after challenging Vanessa to go forth and “do something that you believe might make you happy, even for a moment,” the tough cookie almost broke down herself.

And what did Miss Ives think might make her happy? Paying a visit to Alexander at the museum. After the two bonded some more, this time over the way Captain Nemo turned him into a fanboy in spite of his not being “made for adventuring” himself, she invited him to a (for lack of a better term) screening of 20,000 Leagues Under the Sea. Afterwards, he sent mixed signals right and left, telling her that he would pass on joining her for coffee but that the evening “meant more to [him] than [he] could say.”

Finally, as the hour drew to a close, Renfield reported to Dracula what he’d heard when he listened to Dr. Seward’s recordings of Vanessa (and the doc’s reaction). In return, the increasingly squirrelly minion wanted blood, which his master provided by slicing into his own wrist. And, as the camera panned up, we discovered that Dracula was none other than Alexander!

Were you surprised by the big reveal? Hit the comments!