Bless their hearts. Even though it’s the end of the world on Fear the Walking Dead, Chris and Alicia were still indulging their guilty consciences in this week’s episode — in the former’s case, with bloody disastrous results. (Emphasis on the bloody.) Who wound up worse for wear, thanks to Chris’ attempt to make up for his mistake? Read on and find out!

‘WE CAN’T BRING JUST ANYBODY’ | Early on in “Captive,” Jack scolded Alicia for sneaking onto the deck of Connor’s boat (which turned out to be at a marina). The smitten teen didn’t want his potential girlfriend to get on the boss’ bad side. “He can be a little… ” Jack explained. (And we never did quite find out what “…” meant.) Whatever, Alicia replied more or less. All she wanted to know was whether her family had been dropped off safely on shore.

Aboard the Abigail, when a badly injured Reed wasn’t warning his captors that Connor “might be a little bent” when his kid brother didn’t return with the yacht or describing what he’d do to Ofelia once he got free, he was bragging that his sib had a dozen men and five boats. (Hardly Negan-sized numbers, but respectable for this early in the apocalypse.) Upon learning that intel, Daniel was done “treating” the hostage. However, Chris, dying to help after letting Connor’s crew on board in the first place, offered to stand guard. Fine, said Daniel. Just “do not engage.” (Cue the engaging in 3, 2… )

‘I DID WHAT YOU MADE ME DO’ | On the bridge of the Abigail, Luis couldn’t believe his ears when Strand (slowly recovering) backed Maddie’s plan to retrieve her family before heading to Baja. Even if they succeeded in getting Alicia and Travis back, Luis reminded Strand — in Spanish, pointlessly, since Daniel was present — he only had money for two people, and “they” charged by the head. (Hmm… )

Meanwhile, on Connor’s boat, the Abigail‘s approach — too soon to have made it to land and back — tipped Alicia off to the fact that she’d been misled about her family’s safety. After violently lighting into Jack about the lie, she challenged him to join her in setting off in search of them, and, whether because he really was a good guy at heart or because he was just really randy, he agreed. (He also seemed to think that he was going to — but didn’t — get a kiss out of agreeing. So, yeah, probably just randy.)

In lock-up, Travis was stunned to be visited by Alex, who explained that, in order to obtain safe passage, she’d offered Reed’s brother the Abigail. “But,” she added, “I asked for you” — since, in her eyes, he’d cut the rope on her and Jake as much as Strand had. Later, she explained that she’d had to choke the life out of a dying Jake, who hadn’t wanted to be thrown overboard to drown before he became zombified. In response, Travis tried to soften up Alex by revealing that he’d had to do the same thing to Chris’ mother. (Not the strangling part, but you know what I mean.)

‘BLOOD’S ALL THAT MATTERS NOW’ | Once the Abigail was within spitting distance of Connor’s boat, Maddie struck a deal to trade Reed for Travis and Alicia. There was just one problem: Chris was so desperate to “make up for” letting Reed & Co. aboard in the first place — even after Nick assured him that dude, nobody would’ve shot a pregnant chick — that he pulled the trigger on their captive. “He was gonna turn,” the teen told Ofelia, Maddie and anyone else who would listen. (But was he, Chris? Was he really?) 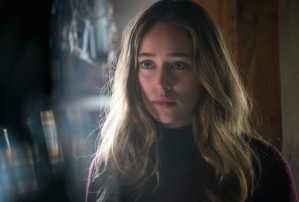 Aboard Connor’s vessel, Jack took Alicia to see Travis so that she could tell him about their plan to rescue him before taking off. “I got us into this mess,” she lamented, “and I am gonna get us out of it.” Actually, it was Alex who got them into this mess, Travis explained. But Alicia wasn’t hearing it. And it didn’t matter, anyway, because the trade screwed up the whole hare-brained scheme. Finally deciding to make a break for it by herself — better luck next time, Jack — Alicia was stopped by Vida. Not for long, mind you. Maddie’s daughter whupped the mom-to-be and left her locked up in Travis’ now-empty cell.

‘THE PEOPLE WHO ABANDONED [ALEX] WILL ABANDON YOU’ | While Nick and Ofelia were wiping up Reed’s blood, the punk — his brain apparently too small for Chris to have hit it — reanimated. Before Nick could put Reed back down, Daniel intervened. They could use the walker to go through with the trade, he deduced. All they had to do was put a bag over his head. (How convenient was it that Connor also decided to put a bag over Travis’ head? From Connor’s perspective, it served no purpose, right? Everyone knew who was being exchanged.)

Though Nick volunteered to take Zombie Reed over to the dock on the Zodiak, Maddie — still insisting on babying the youngsters — refused to let him. Why? “Because you want to.” (Classic mom response for Mother’s Day.) When at last the trade went down, so did Connor: He was bitten as soon as the hood came off of his brother. At the same time, Jack caught Alicia about to jump off of Connor’s boat without him and couldn’t believe that she’d go back to her family, knowing what they had done to Alex. (If seeing is believing, maybe her leaping into the water and joining Travis and Maddie on the Zodiak did the trick for him.) At any rate, the haunted looks they exchanged as the Zodiak headed for the Abigail suggested that — whenever, however Alicia and Jack met again — whatever was between them wasn’t over.

So, what did you think of the episode? Do you think Alicia and Jack actually care(d) for one another? Were you surprised Alex didn’t torture Travis? Hit the comments.