Let’s imagine that the creative minds behind The Blacklist have designed these final Season 3 episodes like a treasure map.

Ever since Liz was suddenly killed off in the April 14 installment, the friends and co-workers that she left behind have slowly, methodically attempted to find the proverbial loot — in this case, the people responsible for her untimely death. Sure, there have been a few detours — Red’s trippy pit stop in Cape May still makes my head hurt — but for all intents and purposes, he and the FBI task force have made it their mission to track down the group that targeted Liz on her wedding day.

With the introduction of Famke Janssen’s Scottie Hargrave in Thursday’s episode, we got a few steps closer to learning who put a hit out on Agent Keen. And since Scottie will likely play a major role in the season’s final two episodes — in addition to leading a potential Blacklist spinoff eyed at NBC — let’s break down what we learned about her in this week’s pivotal hour:

WHO IS SCOTTIE? | Legally named Susan Hargrave, Scottie is the co-owner — along with her husband, Howard — of Halcyon Aegis, a private military intelligence agency that specializes in particularly sophisticated, complicated operations.

HOW IS SHE CONNECTED TO LIZ’S DEATH? | In short, Scottie and her company were hired by an anonymous employer to capture Liz on her wedding day. And, as Scottie makes clear to Red when she eventually comes face-to-face with him, she and her team weren’t hired to kill Liz — just to abduct her.

HOW DOES SHE KNOW RED? | As is the case with everyone on the titular list of criminals, Red encountered Scottie and her husband before — but these circumstances are much, much more dire. In order to get some face time with Scottie, Red needs to get her attention by infiltrating all of her active business operations, derailing them and killing off some of her closest associates, all of which he does with ease. (Ever the showman, Red pins a typed note to the body of each new casualty, asking Scottie to meet him in person.) 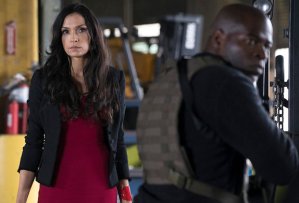 Eventually, Scottie agrees to a face-to-face with Red, which, as far as she’s concerned, will be the perfect opportunity to kill him and settle a score she has with one of her adversaries. But Red manages to stay one step ahead of Scottie’s murder plot, thanks to intel from Tom, and any attempts to end Red’s life are totally thwarted.

Once he and Scottie are finally seated across from one another, Red demands to know who hired her to target Liz. She quickly reveals that it’s a man by the name of Alexander Kirk. (If that moniker sounds familiar, it’s because TVLine reported on that character’s forthcoming story arc back in March. Described as a charming and charismatic businessman, Kirk — to be played by Ulrich Thomsen — is Red’s longtime nemesis, and he’s got ties to an intimate, shocking secret from Red’s past.)

The big takeaway from Red’s chat with Scottie? Since Scottie now has a target on her own back, after failing to abduct Liz, Red insists that he and Scottie work together to take down Kirk, who is now their mutual adversary. After all, the enemy of my enemy is my friend, right?

* In order to get some intel on Benjamin Stalder — the powerful energy executive from last week’s episode — Tom poses as a hipster named Reggie in an attempt to hijack the computer files of Amanda Bigelow, an assistant at Stalder’s company.

The only way to get those files, though, is for Tom to go on a date with Amanda and make out at her apartment — something that Aram is none too pleased to hear about the next day. After reassuring Aram that he did love Liz and has no intention of dating new people anytime soon, Tom gives Aram some romantic advice of his own: Tell Samar how you feel about her, already!

Your turn! What did you think of Janssen’s Blacklist debut? Drop all of your thoughts on the episode in a comment below.