The Machine is critically wounded — and at a critical juncture in Samaritan’s ascent to power — as CBS’ Person of Interest opens its 13-episode farewell run tonight at 10/9c.

In the year-ago (!) Season 4 finale, Team Machine learned that She had been eluding Samaritan by hiding in the nation’s electrical grid. With the Machine forced into the proverbial corner of a ConEd substation in Brooklyn, Finch (played by Michael Emerson) compressed 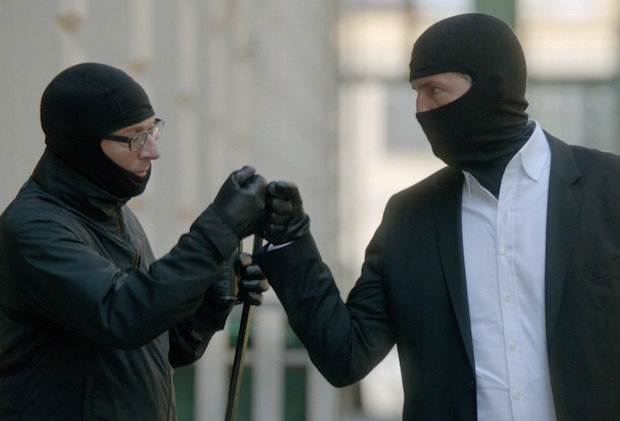 the vast amount of code into a suitcase stuffed with memory cards, as Reese and Root (Jim Caviezel and Amy Acker) fended off a brutal assault by Samaritan’s human henchmen.

The final season premiere picks up in real-time, with Finch and Reese racing to get the slowly fading Machine to a power source and Root forming a questionable alliance in the name of dodging Samaritan’s minions. Fusco (Kevin Chapman) meanwhile is mired in his own workplace dilemma, spurred by the execution of not one but two “most wanted” crime bosses, Elias and Dominic.

“Our guys are under duress,” POI co-showrunner Greg Plageman told TVLine at the series’ 100th-episode soiree. “The Machine is in a suitcase and it’s becomes a fight for survival at this point. And then they have to try to figure out whether we can reconstitute The Machine.”

Because make no mistake, 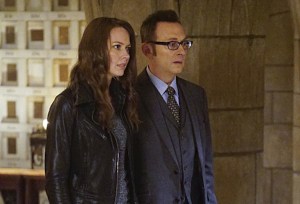 The Machine will be both glitchy (watch a sneak peek) and foggy even after She is (quite inventively!) decompressed. “She’s also a bit whimsical,” says writer/co-EP Denise Thé. And as Harold and Root work their noodles to get their girl back into fighting shape, “We’re really going to see the evolution of The Machine,” Thé says. Faced with the question of “How do you defeat a superior threat?” in Samaritan, “We’re going to see our people come together to do that.”

To possibly emerge triumphant will not be easy, though, not by any stretch. For one, Harold and Root will butt brainy heads over whether to let The Machine in its new form be an “open system,” as She was when first created. (New flashbacks show Finch making the heartbreaking decision to curb that freedom.)

“What’s great about the early episodes,” says co-showrunner Jonah Nolan, “is watching the two of them argue about if they can adjust The Machine’s ‘secret formula,’ and should they. Given that time seems to be running out for them and the stakes are so much higher, what are the ethics in that situation, of changing your strategy? That’s a big part of the theme for the season.”

Indeed, the team will need every trick at their disposal as Samaritan grows ever more ruthless in launching offenses. (For example, mild-mannered civilians can be “activated” into taking action with a simple “Breaking News” alert to their cell phone.) “‘What is Samaritan up to?’ is an interesting question that we’re going to answer,” says Plageman. “What would happen if an artificial super-intelligence started to take hold, only you didn’t realize what was going on? Exploring that is the fun of this season.”

“Samaritan is not an easy adversary to defeat,” Nolan says. “But this is definitely a season where our guys are getting fed up with getting their asses handed to them. We’re going to switch that up a bit.” 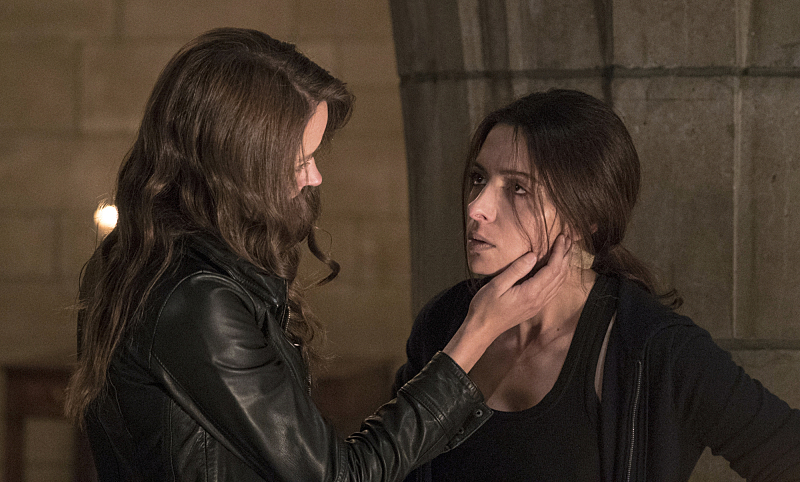 (seemingly?) replenished resources is one Sameen Shaw (played by Sarah Shahi), who resurfaces in the fourth episode after a prolonged time under Samaritan’s watch. “We have a very ‘interesting’ Shaw-centric episode, where you get to see what her life has been like living in the grip of the enemy,” Thé shares.

But what is her mindset after this stint in captivity? Has Samaritan snuffed the badass’ spirit?  “I don’t think Shaw is ever beaten into submission,” says Sarah Shahi. “She would stare a bullet straight in the eye with a smile on her face and still not feel like she’s succumbed to anything. But they’ve definitely done a number on her. She does return to the team, and the question will be whether or not she’s one of them still.”

Come June 21, when the series’ own number is up, boffo stakes plus a badder Samaritan plus a rebuilding Machine will add up to what Kevin Chapman hails as “the best season we’ve ever had on the show. The action, the performances, the content, the subject matter…. With everything, they’ve really gone above and beyond.” Adds Nolan: “I don’t think anyone’s going to leave unsatisfied.”