The former Speaker of the House, who made news this week by likening Republican presidential hopeful Ted Cruz to “Lucifer in the flesh,” turned out to be the unexpected guest star of President Barack Obama‘s eighth and final speech at the annual White House Correspondents’ Dinner. 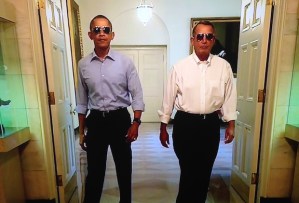 In a pre-taped bit that closed out POTUS’ intermittently hilarious monologue, Obama and Boehner strolled through the White House donning Ray-Bans, wiped away tears while screening Toy Story and even threatened to partake of publicly verboten cigarettes. “You want one? Hmm?” asked Boehner, as Obama eyed the carcinogen with a goofy desire funnier than anything we’ve seen on Saturday Night Live in the last few months. (Hey, can we get an #ObamaForSNLHost hashtag trending tonight?)

Still, it was the President’s half hour-plus address that brought the loudest and most varied laughs. (Was it me, or did Obama hit his former Secretary of State/current Democratic front-runner Hillary Clinton harder than he did Republican sensation Donald Trump?) Below, my countdown of the 10 best — and two least comfortable — zingers:

10. “Eight years ago, I said it was time to change the tone of our politics. In hindsight, I clearly should’ve been more specific.”

9. Discussing his recent surge in approval rating, POTUS joked, “The last time I was this high, I was trying to decide on my major.”

8. “You might’ve heard that someone jumped the White House fence last week. But I have to give the Secret Service credit. They found Michelle, brought her back. She’s safe back at home now. It’s only nine more months, baby. Settle down!”

7. Mentioning a recent trip to England in which he had lunch with the Queen, took in some Shakespeare, and hit the links with British Prime Minister David Cameron, Obama mused, “Just in case anybody is still debating whether I’m black enough, I think that settles the debate.”

6. “If this material works well, I’m gonna use it at Goldman-Sachs next year. Earn me some serious Tubmans.”

4. To Democratic presidential candidate Bernie Sanders (who was in attendance), POTUS had this to say: “Bernie, you look like a million bucks. Or to put it in terms you’ll understand — you look like 37,000 donations of 27 dollars each.”

3. Obama reserved his most plainspoken but scathing joke for the assembled members of the D.C. media corps, as he cut short the part of his speech directing vitriol at Trump: “Taking your lead, I wanna show some restraint. Because I think we can all agree that from the start, [Trump] has gotten the appropriate amount of coverage befitting the seriousness of his candidacy. I hope you’re all proud of yourselves.”

2. Further throwing shade at the Republican party’s two leading candidates to contend for his place in the Oval Office, Obama noted, “Guests were asked to check whether they wanted steak or fish. Instead, a whole bunch of you wrote in ‘Paul Ryan.’ That’s not an option. Steak or fish.“

1. Weighing in on the criticism that Donald Trump lacks foreign policy experience, Obama had this to say: “In all fairness, he has spent years meeting with leaders from around the world: Miss Sweden. Miss Argentina. Miss Azerbaijan.”

Of course, a couple of the jokes clearly landed with a thud with members of the audience. As Obama noted pointed to Republican Senators Tim Scott and Cory Gardner in the house, he dropped this grim barb: “Security, bar the doors: [Supreme Court nominee\ Merrick Garland come out. We’re gonna do this right here, right now. It’s like the Red Wedding.” (OK, that was an A+ Game of Thrones reference, but mmmmaybe let’s not threaten to slaughter our political opponents in these extra tense times, good sir?)

Later, Obama’s scathing joke about Hillary Clinton played maybe too cruel by half? “You’ve got to admit it, though: Hillary Clinton trying to appeal to young voters is a little like your relative who just signed up for Facebook,” Obama said, before adopting a doddering old-lady voice. “‘Dear America, did you get my poke? Is it appearing on your wall? I’m not sure I’m using this right. Love, Aunt Hillary.’ It’s not entirely persuasive.”

What did you think of President Obama’s White House Correspondents’ speech? Hit the comments with your thoughts!