This Monday on Gotham (Fox, 8/7c), Gordon and Bullock bring Bruce up to speed on the investigation into his parents’ murder — which just might result in yet another death, as seen in this exclusive sneak peek.

In the episode “Azrael,” Bruce learns that Hugo Strange was involved in the plot to silence Thomas Wayne, and now he wants Gordon to take action. What kind of action, exactly? Press play above to find out. 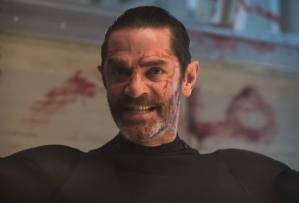 (and Bruce is), Strange sends the newly resurrected mayor to confront the troublesome Gordon — in his new form, as “the canonical character Azrael,” executive producer John Stephens shared as part of TVLine’s May Sweeps Preview Extravaganza. “He is going to be a scourge to Gordon in many ways, and he will also help us to reveal the ultimate objective of what Hugo Strange’s plans are going to be, which have been mysterious up until now.”

Azrael may also bring a bit of the bat to the series, Stephens says, as “sort of a proto-Batman figure, this guy with a cape who’s leaping around Gotham.”

Elsewhere in the episode, Nygma does his own investigating into Professor Strange’s antics.

“The people who have put Nygma [behind bars] wildly underestimated the person who they think that they have locked up,” Stephens teases. “When you put someone who’s a master at puzzles inside a giant puzzle, he’s going to find a way to get out of it, and what Ed discovers in Arkham will affect the rest of the course of the season.”