“I can’t live for long with what I feel inside. I don’t see how anyone can.”

Raymond Reddington has said a lot of heartbreaking things on The Blacklist, but those 16 words, spoken while trying to sum up his sadness over Liz’s death, might just be the gloomiest he’s ever uttered.

Those two sentences also encapsulate the general mood of Thursday’s episode of the NBC drama, its second outing since Liz was unceremoniously (and only possibly) killed off. As the hour unfolds, we become privy to the ways in which each FBI task force member is coping with Liz’s death — and even though none of them are falling apart quite as badly as Red, none of them have quite reached the acceptance stage of grief, either.

Still, only so much time can be dedicated to mourning Liz in public. After the team lays their friend to rest — complete with eulogies from Cooper and Aram that probably had you ugly-crying all over the place — their attention turns to investigating the anonymous group that hunted down Liz on her wedding day. Even though Aram is in emotional shambles and could seriously use a helping hand from Red, the task force’s tech guru manages to pull himself together and zero in on who was surveilling Liz the day she died: a nameless team of mercenaries who use a global satellite network to keep track of their targets.

In the days since Liz’s death, it seems the mysterious mercs have shifted their focus to Benjamin Stalder, a powerful executive at the Energy Consortium Group. And because you likely have no interest in reading a 10,000-word recap, I’m going to cut right to the chase with this Stalder business: Even though the mercs injure and/or kill a good chunk of Stalder’s security team, he’s able to get out of the country before the anonymous baddies off him – but his escape from the U.S. might not exactly be a good thing. 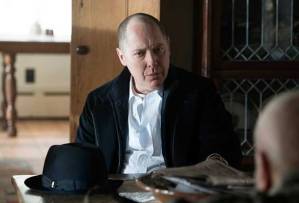 During the episode’s final acts, Cooper realizes that Stalder must somehow be connected to Liz’s unfortunate demise, despite his initial statement that he had zero knowledge of who “the fugitive” was, outside of what he heard about Liz on the news. With the help of security footage from Stalder’s hotel, Cooper discovers that one hour before the energy exec was abducted by the mercenaries, he met with a mysterious, dark-haired woman (played by Famke Janssen, who makes her official debut in next week’s episode) for a conversation that, even via grainy security snapshots, seems intense.

And that’s not all. When Cooper recruits Tom to help out with the case, Tom begins to follow Cynthia Panabaker, the White House counsel. He stays on her tail as she heads to the airport that evening, and when Cynthia arrives on the tarmac, she too has a brief conversation with Janssen’s character. But who is this woman?! As Tom and Cooper look over their photos of her, Tom takes a wild guess that she is Liz’s mother, Katarina Rostova — but, as we all know from last week’s episode, that couldn’t be further from the truth. (Hmm, if only there were a backdoor pilot coming up that explained her involvement in this whole ordeal…. oh, wait!)

Anyway, you might be wondering where Red has been during all of this, and the short answer is that he pays an unexpected visit to Liz’s grandfather, Dom, to inform him of Liz’s death. Dom is understandably devastated by the news, and he’s even more bitter toward Red than ever — considering Red was indirectly responsible for both his daughter and granddaughter’s lives being ended.

In a moment of desperation, Aram comes to Dom’s house, hoping to convince Red to rejoin the task force and assist with their investigation into Liz’s adversaries. Red, to no one’s surprise, flat-out refuses — but when Dom tells Red a compelling story about the hopelessness he felt when Katarina died, Red has a change of heart, and he agrees to get back in the saddle alongside Aram and the FBI team.

Other developments in the hour:

* Tom finally learns how to swaddle baby Agnes, and Ryan Eggold’s scenes with his on-screen daughter are some of the TV season’s most precious.

* Having attended Liz’s funeral together, Cooper and Charlene take baby steps toward rekindling their romance. Three cheers for Cooper (hopefully) not sleeping in his office soon!

* It’s official: The most gut-wrenching moments on The Blacklist are the ones when Aram cries. Can’t. Deal.

With that, I turn it over to you. What did you think of Thursday’s episode? Tell us in the comments section below!