Put down your Lysol spray, this Empire fan needs to talk to you.

While you’re stressing about disinfecting the chair occupied by Blogger With the Better-Than-Average Hair, you ought to be pointing some anti-bacterial realness directly at the man who makes the phrase “I got your back” sound like a death threat. A man who threatened to murder the mother of your unborn grandchild somewhere between the delivery room and the recovery room. (We’ll forget, for a second, how you cold-cocked that same woman in the Season 1 finale.) A man who is openly using/abusing your eldest and middle children in the name of… stock price? Personal power? Unapologetic sport? 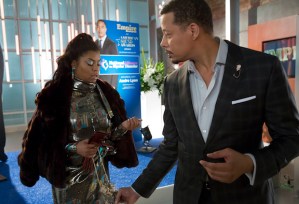 Lucious, after all, has lied, murdered and swindled his way to power, but you are his Kryptonite. You have to know this. You’re street smart. You did 17 years behind bars for him. You loved him. But your love for your children has to come first, right?

And while we saw the rush of scheming and blind fury in Lucious’ eyes as he embraced you — pretending to be happy that the two of you had been named co-CEOs of Empire Entertainment — it’s interesting that director Sanaa Hamri didn’t show your face in that moment.

Did you flash a fleeting smile, as you imagined the knife plunging into your ex-husband’s back? Or did you grimace, thinking of all the pain and suffering you’ve experienced, waiting for your moment to be the boss — the only boss?

With only two episodes left of Season 2, we’ll find out soon enough. Just know, I’m rooting for you.

All the best,
Michael With the Thin Hair 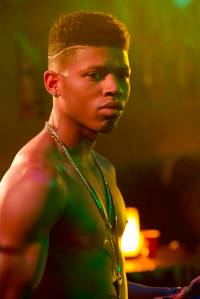 YOU CAN FIND HIM IN THE CLUB, BOTTLE FULL OF ‘BUB | Fresh off losing his spot as Empire CEO, Hakeem drowns his sorrows in champagne and exotic-dancer derriere. Oh, the details! Synchronized situps while straddling the poll! A sexy nurse collecting stray bills off the floor! Laura stopping by and slapping the shades right off her errant fiancé’s clueless head! I am pretty sure I didn’t hear a morning-after scene with Jamal grumbling, “You smell like stripper ass,” and Hakeem responding, “Stripper ass smells good.” (C’mon, we’re all gonna pretend that never happened, right?) All’s well that ends in a hospital room in front of your future baby mama, though — but let me not finish that sentence because I’m getting ahead of myself…

HOW JAMAL GOT HIS GROOVE BACK | Lucious adds another checkmark to his Father of the Year list when he insults Jamal at an Empire press event touting their dueling American Sound Award nominations. This seems like poor form for a dude whose No. 1 concern is getting back his title of Empire CEO, but ego is a tricky thing. Jamal is trying to let it all slide off his back when suddenly the world’s largest needle scratches across the world’s largest record: Who’s at Empire HQ, working as a cater-waiter, but his not-too-distant ex-love Michael! Becky’s immediate response — “Are we gonna discuss this whole Chase One thing?” — makes me wish she was a Greek chorus dropping burning questions and harsh truths over every scene… and I will not raise a fuss if showrunner Ilene Chaiken steals said idea for Season 3. 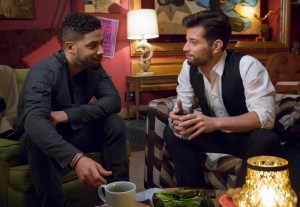 Jamal and Michael retreat to the little dive bar where they first met, with Jamal jumping on stage for an impromptu blues jam with Fantastic Negrito. Later, when he shows up for Lucious and Cookie’s big media event to solidify the idea of Lyon Family Unity in the minds of shareholders, he hears this dad taking credit for picking all the tracks on Jamal’s Black and White album. BAM! He’s outta there — and his impromptu concert with Fantastic Negrito — with Freda in attendance — generates some serious media buzz. When you’re trying to win an ASA, it seems like true artistry trumps mogul madness, no? Also, nice remix of “Good Enough,” Jamal!

RIDE OR DIE CHICK | As Anika ponders whether or not she wants anything to do with the Lyon family, Hakeem is trying to man up and make a commitment to being in the baby’s life. “I’ve seen every wrong move in raising a family,” he pleads. But her retort is basically a mic-drop from the top of the Empire State building: “Your father threatened my life.” Hakeem promptly busts in on a Lucious-Harper “interview” — and by interview, I mean “lavish lunch as foreplay” — and tells his dad if he makes one more move against Anika, he’ll never see him or his future grandchild again.

When Cookie follows up with Anika to make things right, her old nemesis is being taken out on a stretcher with some sort of unexplained pregnancy complication. “I’m not followin’, I’m ridin’!” says Cookie, jumping into the ambulance, and the women have the closest thing to a truce they’ll probably ever have. In the end, it looks like Anika and her fetus are going to be OK, Lucious decides her respects Hakeem’s warning, and Laura forgives her man, realizing he’s trying to do the right thing. None of this is going to end well, is it?

HARPER, YOU IN DANGER | Lucious promises Harper an “exclusive” — which is not a word I usually associate with nasty rough leadup to sex involving slapping and choking. (Brother, can you spare a Clorox Clean-Up wipe for my eyes?) When Lucious stops the action for a text from Cookie, Harper goes one step too far, calling his ex the “manipulative bitch with who has the mighty Lucious Lyon wrapped around her finger.” Just like that, the love is dead. 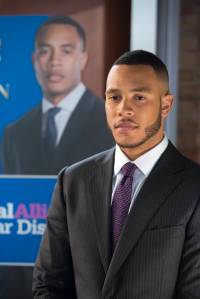 Meanwhile, as Andre plans to make himself the public face of bipolar disorder and appear in a united front with Lucious — hey, it’s good for the company — a spurned Harper hands him an envelope showing that his presumed-dead grandmother is alive and well and living in a group home outside Philly. Uh-oh. He bolts from the press conference, but Cookie saves the day promising an ASA performance by Lucious, Hakeem and Jamal that she has no idea if they’ll agree to. For her brilliance, she’s rewarded by the Empire board with an offer to be co-CEO with Lucious. It’s unanimous. He’s enraged. The game is on!

LINE OF THE NIGHT | Lucious: “Just for your information, nothing happened between me and Harper.”
Cookie: “You know they got blue pills for that. Nothin’ to be ashamed of.”

What did you think of this week’s Empire? Is Cookie playing a super-smart, super-long game — or is she about to get duped? Sound off below!