If last month’s Underground premiere successfully misled you about the agenda of bounty hunter August Pullman, that fake-out is precisely what pulled Christopher Meloni to the WGN America drama (airing Wednesdays at 10/9c).

“I finished the pilot script going, ‘Oh no, he didn’t,'” the Law & Order: SVU alum says of the twist, in which we discovered that August was not abetting a runaway slave but temporarily safeguarding her for his own financial gain. “I just thought that’s a great place to come from, this character that you never know what’s going to happen next.”

With his increasingly less-impressionable son Ben in tow, August now is on the trail of the Macon 7, each of whom has a thousand-dollar bounty on their head. Here, Meloni shares his take on August’s “system”-driven code, the curious casting of his character’s addled wife and the already-renewed series’ overall exploration of this “tinderbox” time in U.S. history.

TVLINE | You had one of the great 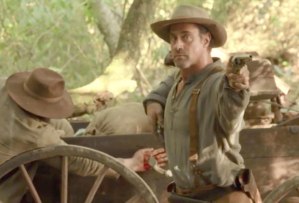 character intros in the pilot, because we couldn’t quite get a bead on this guy. Did you have any questions for the writers about August as you first got to know him?
Yeah — my question was, “How much more awesome can you make this guy?” Look, your impression, your feelings about the guy, was exactly what I had when I read it. I finished the pilot script going, “Oh no, he didn’t.” I just thought that’s a great place to come from, this character that you never know what’s going to happen next. I feel like for the whole show, that’s kind of the secret to its success. It’s always surprising people.

TVLINE | Does August have an opinion on the whole slavery issue beyond a business interest?
I think you would have to dig into his heart with a pickaxe to get to it. I think he’s representative of many folks, whether they wrap poor decisions in their religious beliefs or their economic interests. We compromise ourselves against the moral truth. We come up with very good excuses.

TVLINE | He’s certainly less vicious than his slave-catcher rivals, the Patty Cannon gang.
Yes. There’s no sense of glee in what he does. An example of that was when he drank from the same water gourd as the slave that he captured at the very beginning. For a white man [in that time] to drink from the same thing that a black person drank from…? The way I see this man, if he believed in God he would have been the best minister you could have hoped for. I think he believes in humanity and all of us being equal and that sort of thing, but he’s also a man caught up in the system of “I’ve got to do what’s right and best for me. I have bills to pay. I have a wife to take care of.”

TVLINE | If you were to give a slight edge to one direction or the other, is this more about the son influencing the father or the father influencing the son?
Again, I think therein lies the beauty of the contradictions in the writing. Look, I’m a parent and I can’t tell you how many times I’ve walked away from a situation with my kids going, “They taught me a thing or two!” You always think, “I’m the parent and I’m here to help them grow,” but the truth is the inverse very often happens.

TVLINE | Is there any particular fallout 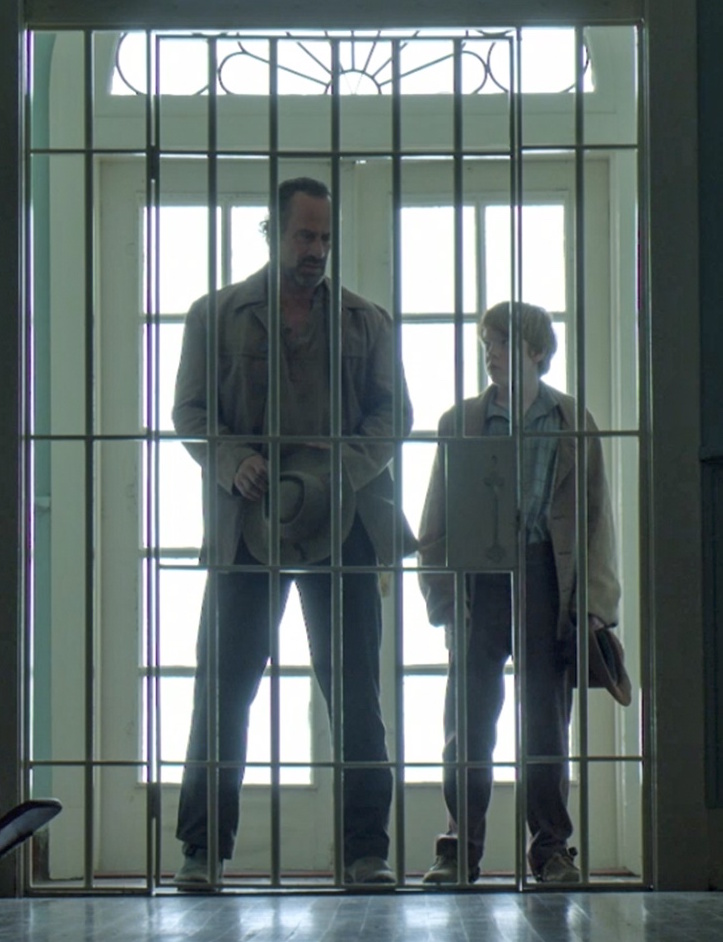 from last week’s episode, where they visited Charlotte? Or was that more to let the viewer, as well as Ben, realize how bad his mother’s condition is?
I think it was intended as more insight, into hopefully getting a clearer, more rounded sense of August and his situation.

TVLINE | Jennifer Nettles was an interesting choice to play Charlotte. How did that come about?
I don’t know — she came out of the blue! I’ll be honest, I didn’t know her or her music, and she couldn’t have been more pleasant putting up with my questions. [Laughs] Then I looked her up and went, “Oh my God. She’s a superstar.” I felt like an idiot, but it wouldn’t be the first time in my life. She couldn’t have been more lovely.

TVLINE | She was quite perfect for the role.
Oh my God, and the voice…. This is how great she is: People said to me, “I can’t believe I didn’t know that you sang.” The truth of the matter is I don’t sing. She was so good with her harmonization that she actually made me passable! If you took her off that soundtrack you’d hear me warbling.

TVLINE | Did you ever get the sense that this material, dark as it is, was at all difficult for Brady [Permenter, who plays Ben]?
No, no. He’s wise beyond his years. His mom was on set. This is a very clear kid, very quiet, but anytime he speaks he always kind of surprises me because he’s so insightful and humorous in his insights and what he’s responding to. He’s a great guy to work with.

TVLINE | Was there anything that you were surprised to learn about this time? Obviously you and I, being men of a certain age, have read about this a lot in the history books….
When I was handed [the pilot script] and I was told the year, 1857, I almost slapped my head going, “Oh my God, why hasn’t anyone investigated this before?” There have been a lot slave narratives, but the more specific picture here is the focus in on the tinderbox that is the United States before the s–t hits the fan, before the Civil War. You have John Brown attacking Harper’s Ferry. You have the Dred Scott Decision. You have all these new territories coming in — are they slaveholding or not slaveholding? Is half of the state slaveholding and the other half not? It was so fraught with big decisions having to be made and huge economic interests at play. That’s an argument and a drama that is ever recycling itself, whether it’s climate change and the deniers of that, or transgender rights, or the rights of gays to marry issue. It kind of boils down to: “Are gays a part of our society? Fantastic. Then what are they allowed as members of our society?” You keep going back to these points of equality. “Was a black person a property or was it a human being? Let’s figure it out.”

TVLINE | We as a country never seem to be at a loss for finding divisive issues to fight over.
Well, I think you really have just two sets of people and how they view life and the world. For my money, I feel as though there’s no end of tortured rationalizations that people use to defend their point. I think one of the first things they go to is religion, but that’s my opinion.

TVLINE | Do you have 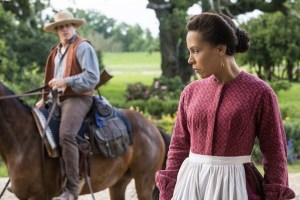 a favorite scene, either that we’ve already seen or is yet to come?
Yeah. I have a scene coming up with Amirah Vann [who plays Ernestine]….

TVLINE | Well, I’ll be sitting here wondering what puts her and August back in the same scene.
You should, because it’s fantastic.

Want more scoop on Underground, or for any other show? Email insideline@tvline.com and your question may be answered via Matt’s Inside Line.