This week on The CW’s Arrow, Laurel Lance was laid to rest — but not before someone threatened to tarnish her legacy as the Black Canary.

I would think — though I will be proven wrong! — that even those who went into this hour with a cynical ‘tude had to be moved, if not also impressed, by the weight of the material. The flashbacks to the time of Tommy Merlyn’s own tragic passing — he being the first one to fall under Oliver’s watch — made some salient points while also paving the way for Oliver’s speech as Laurel’s own graveside. The callbacks to Laurel not knowing Oliver’s secret and his self-imposed re-exile to Lian Yu also were worked in nicely.

And then you had Paul Blackthorne, 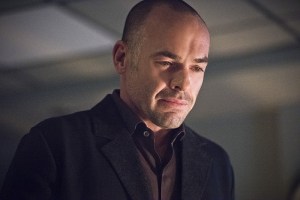 taking a storyline he has played multiple times before — mournful father — and somehow putting a heart-wrenching, fresh spin on it as Quentin, having seen it all at this point, clutched onto the belief that Laurel could and would come back. Because as the past has shown him, he needs her to. “She’s always been there for me,” Quentin wailed. “She’s my rock!” But ultimately it was Oliver who convinced Lance that, alas, this time, “We have lost her.”

Also making the most of his arc within the aftermath was David Ramsey, as Diggle somewhat rightfully placed the blame for Laurel’s fate at his own feet, steadfastly standing by his H.I.V.E.-brainwashed brother Andy, while telling Oliver to “pretty much go to hell.” Felicity, after noting that he is just “one illegitimate child short of an Oliver Queen impression” with his blame game, echoes Oliver’s mantra, assuring Dig, “It’s not your fault” — though for a moment earlier in the episode she didn’t discount that, trying as she was to ignore her MIA self’s own possible role in the team’s setback.

The fake Canary plot was… a bit clunky. Evelyn Crawford (Sharp) — who in DC Comics apparently came to be the Birds of Prey member Starling — stole Laurel’s sonic scream device, (somehow) synced it to her own vocal chords and went around town… screaming, a lot… as she worked through issues pegged to her parents’ death at the hands of Damien Darhk, a tragedy she believes Arrow and Friends could have prevented. (I know that Laurel as Black Canary worked in the shadows and didn’t exactly pose for publicity shots, but you’d think someone would point out this petite poser’s physical mismatch.) Curiously, Evelyn at one point targeted Alex (hey, remember Alex?), saying, “You work for them!” Has Thea’s boyfriend/Oliver’s ex-campaign manager been playing both sides all along?

Ruve allowed this mock Canary to storm a gala and make an attempt on her life, as part of a campaign to smear the name of the real deal and her masked vigilante friends. But Oliver stops Evelyn from executing the mayor. Later, speaking at Laurel’s funeral (whereas at Tommy’s a sense of guilt kept him mum), he revealed the city’s ADA to be the Black Canary, explaining that Laurel “wanted to do more” for the people. “She was not a criminal. She was a hero.”

We then met up with the infamous flash-forward scenes, where Barry Allen checks in on Oliver at a (continuity hiccup!) more closely settled gravesite, before (continuity hiccup!) speeding away. We then see the headstone has Laurel’s name on it, underscored by the words: The Black Canary. Oliver hops into the limo, where a (too?) steely Felicity is waiting for him with the charge: “You know what you have to do, right? You have to kill that sonuvabitch.” And though Oliver had just told Barry he was resolved to “end” Darhk’s reign of terror, he admits to Felicity that he isn’t sure how to battle that powerful mix of magic and darkness.

Felicity says that one of the reasons she fell in love with him is because “you always find a way” — and he once again must, “for Laurel, for the city… for all of us.”

What did you think of “Canary Cry”?