In a bid to be, like, 50 percent more objective than I was last week, and as fresh as The News still feels… this Monday’s Castle was quite entertaining, helped by some perfect guest casting.

As Alan Masters, sitcom vet Jonathan Silverman was the perfect hapless Everyman, a mild-mannered safety inspector whose mundane job exposed him to some highly illegal goings-on.

At first, Alan was poisoned, but that didn’t take. Then he was electrocuted and presumed dead a second time.. only to wake up shortly after that attack. All the while, poor Lanie was left to question her skills as an M.E., given this corpse’s refusal to stay dead. A nice comedic runner for Tamala Jones (sigh).

Though Castle has covered (suspected) superheroes before, there was a fresh spin on this instance, as Rick endeavored to test Alan’s powers and help along his origin story (“There’ve been, like, what, nine Spider-Man movies?”). 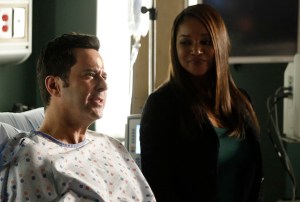 Add General Hospital mobster Maurice Benard as a comic book-y tough guy, and it added up to a solid hour, though the Gwen reveal was a bit ugh. But again, Silverman’s reaction to that betrayal/heartbreak sold the moment, which preceded Alan taking a .22 to the noggin… and surviving, affording him more quality time with Lanie.

The LokSat B-story was clunky, as the LokSat saga has almost always been. (It literally feels like zero work is done on that Very Important, Very Deadly Investigation in between the episodes that circle back to it. Like, weeeeeeks later, Vikram is only now scrubbing airport cameras from the day LokSat flew into L.A.? That said, I liked what Kristofer Polaha did it the final scene, where Caleb Brown reneged on his threats against Kate and instead turned for her, delivering the super-secret cell phone he received when LokSat “inherited” him from Bracken.

Now we just wait for LokSat to call on the next “third Monday”… which the May 16 season finale happens to be.

What did you think of “Dead Again”?