If you sat down on your couch at 9 pm Thursday night and changed the channel to NBC, no one would blame you for wondering aloud, “What show is this?”

Because even though the program that aired for the next hour did star James Spader, and it was sandwiched between new installments of Strong and Game of Silence, in no way did it resemble a regular episode of The Blacklist.

And that, of course, is because it wasn’t a regular episode of The Blacklist. Save for Red and his freakishly eloquent monologues, this week’s outing didn’t feature any of the usual characters or plots we’ve come to expect from the NBC drama — with Liz’s absence naturally being the most glaring of all.

In the first episode since Megan Boone’s protagonist was seemingly killed off, we took a deep dive into Red’s tortured mind — and boy, was it trippy. Here’s how it all went down:

A few days after Liz died from complications during childbirth, Red takes a cab to Cape May, N.J., where it seems he’ll do little more than decompress and grieve. But just as he makes himself comfortable in a beach chair looking out at the waves, he spies a beautiful red-haired woman near the water, who sheds her coat and locket before throwing herself into the waves in a suicide attempt.

Red — despite the many, many layers he’s wearing — is able to rescue the woman from her near-drowning and takes her back to the beachfront house he’s squatting in… and the 24-ish hours that follow Red’s act of heroism are some of the most bizarre and mysterious that The Blacklist has ever produced. (And if you’ve seen even one episode of the show before, you know that’s saying something.) 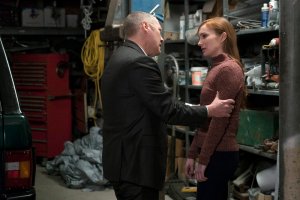 As Red nurses the anonymous woman back to stability, they swap cryptic war stories and drop subtle hints about the life events that are weighing them down. Red, of course, waxes poetic about the recent loss that’s been haunting him, and the woman reveals that several men are on her tail, with the intention of killing her. It never becomes clear why she’s being followed — in fact, there’s a lot that remains unclear throughout Red’s time with the girl — but she and Red seem to come to an understanding about each other: They’ve both done bad things. They’ve both seen bad things. And neither of them really need to talk about it. (Bonus plot twist: Whoever this woman is, she knows Red’s name, which can’t mean anything good.)

Eventually, the men chasing our unnamed beauty make their way to the beach house, and in a massively entertaining but super-tense sequence, Red and the woman take out the hitmen, one by one. A few hours later, as Red is preparing to flee the scene of the crime with his anonymous companion in tow, he realizes he can’t find her anywhere in the house. Instead, he discovers that she’s back on the beach, preparing to once again throw herself into the water.

For the second time this episode, Red, in all his three-piece-suited glory, runs across the sand in an attempt to save the woman, but by the time he reaches the water, she’s gone. And I don’t mean dead — she’s really gone. Vanished. As if she were never there in the first place. Looking for some answers, Red approaches an older man sweeping his metal detector across the beach… but when he asks the stranger if he recently saw a woman dive into the water, the man replies that Red is the only other sign of human life that he’s seen on the beach in two weeks.

If you’ve got a strong radar for plot twists, or you’ve watched The Sixth Sense a bunch of times, you may have seen this next part coming: As Red looks back on his last 24 hours, he realizes that it was all in his head — there never was a woman, no assassins. Every conversation he had with Anonymous was held with himself. He was the one playing the beach house’s piano. He prepared dinner and drew a bath for… no one. (And this is officially the saddest episode recap I’ve ever written.)

But just as Red seems willing to accept his day-long hallucinations, the man with the metal detector discovers a locket buried in the sand — the same locket that Red’s “acquaintance” had been wearing. He buys it from the man and washes off the dirt, revealing an inscription on the necklace that he seems to recognize. And just then, the red-headed woman appears before Red once more — and not only has Red known her all along, but she is Katarina Rostova, Liz’s biological mother.

“You had no choice. It was me or Masha,” Katarina says, stroking Red’s face. “But you did save me. Through her.” So, that monologue Red gave earlier in the episode, about the heartbreaking choice between saving a woman and saving her baby? It seems that doesn’t just apply to Liz and baby Agnes, after all. With that in mind, Red runs off the beach, announcing that there’s someone he needs to see.

OK, Blacklist fans, it’s your turn. What did you think of the show’s first Liz-less episode? Drop your reactions in a comment below.