Question: What are you hearing about how Beckett will exit Castle? —Kristen
Ausiello: Several things. And all of them are… um… less than ideal. Also, you can probably count on Season 9, which has not officially been ordered yet, kicking off with a significant time jump.

Question: Now that I’m recovered a bit from the Blacklist bombshell, I’ll take any scoop you can give us on how the rest of the season will play out. —Sarah
Ausiello: In the Season 3 finale, “Alexander Kirk” — named for Red’s longtime nemesis, to be played by Banshee‘s Ulrich Thomsen — Red will experience a betrayal at the hands of someone very unexpected.

Question: I’m hoping you have some spoilers on Bones‘ new serial killer. —Linda
Ausiello: You’ll begin to see his/her handiwork in the April 28 episode, but the Big Bad won’t actually reveal themself until later in the season, confirms co-showrunner Michael Peterson, who cryptically adds, “Whether or not you will know that it’s them? That’s an entirely different question.” Translation: THE CALL IS COMING FROM INSIDE THE HOUSE! 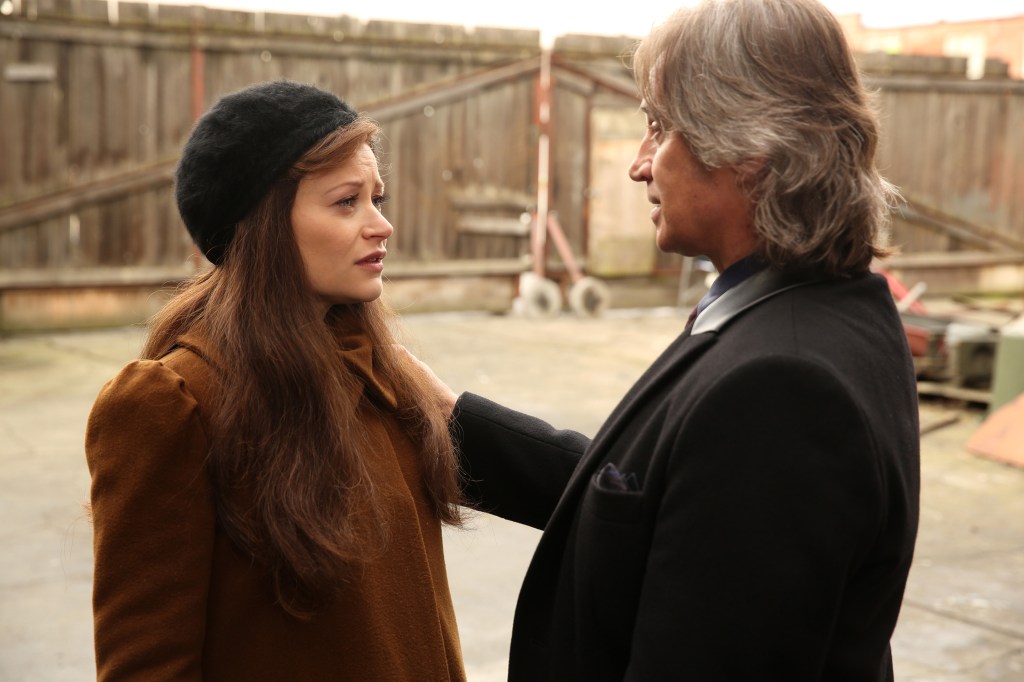 Question: Will Emilie de Ravin’s Belle now be missing from the last few episodes of Once Upon a Time, due to the actress’ maternity leave? Will Belle at least make an appearance in the finale? — Rebecca
Ausiello: Though Belle just subjected herself to a sleeping curse, I am hearing that viewers have in fact not seen the last of de Ravin this season, while Rumple’s expectant wife figure into the storyline through to the two-hour finale (airing May 15).

Question: As the new season of Person of Interest is approaching, do you have any scoop on what to expect from the last 13 episodes? —Mick
Ausiello: No scoop…. unless you consider an exclusive first look at the final-season trailer a scoop (which, for the record, I do).

Question: Any scoop on Grimm? —Jen
Ausiello: This Friday’s episode, titled “Good to the Bone,” is a Wu-centric hour that focuses on the sergeant’s increasingly troubling tendency to wolf out (or something along those lines). “It’s something he must learn to control,” executive producer James Kouf says. OK… but is that even possible? “Well, we think he can,” Kouf teases. “We hope so.”

Question: Quantico is going in a different direction every episode. Are we really going to find out who the terrorist is by the end of Season 1? And why is Caleb faking his mental state? —Johanne
Ausiello: Let’s handle the second question first: Clayton and Claire Haas’ son “is a heroin addict,” showrunner Joshua Safran says. “He’s not faking.” As for the terrorist(s?)’ identity, Safran promises you will definitely know who’s behind the bombings by the time the credits roll on the finale. “In fact,” he adds, “you will know who the terrorist or terrorists are prior to the finale.” 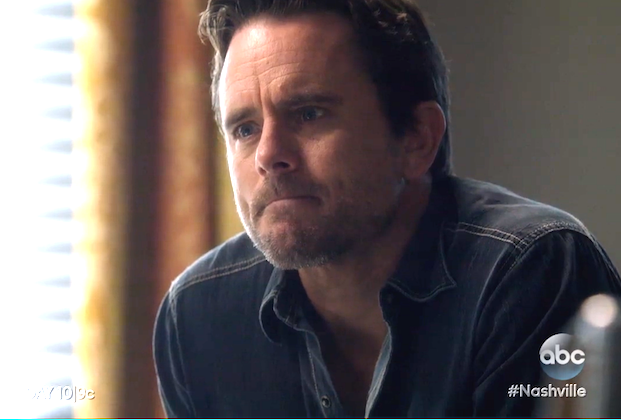 Question: With Nashville on the bubble, did the show shoot an alternate series-finale ending just in case? —Sharon
Ausiello: I sincerely hope they did, considering the season finale ends on a massive cliffhanger. Speaking of the finale, here are three things that will happen and one that’s just wishful thinking on my part.

♦ The name “Jeff Fordham” is uttered several times.
♦ There’s a declaration of love.
♦ At least one couple on the outs grows much closer.
♦ Maddie gets run over by a dump truck

Question: Any sense of what we can expect from How to Get Away With Murder in Season 3? —Mitch
Ausiello: Given the reduction in “cases of the week” in Season 2 — and the overarching emphasis on the Haspstall trial — we asked showrunner Pete Nowalk if there’ll be a similar blueprint for Season 3. “I like switching it up, honestly,” says Nowalk. “I don’t want the show to become stale. In the back half of Season 2, we had so much emphasis on Rose’s case that there wasn’t room for cases of the week. We’ll probably try to do a balance.” Whatever approach wins out in the writers’ room, though, Nowalk says there’s one thing about HTGAWM that will remain a constant: “I love watching Annalise do her job in any way. She loves her job, and I don’t think she’s the same person if she’s not doing it. So, whether that’s case of the week or case of the season, seeing her at work is what I care about.”

Question: Any news on Chicago Fire? —Jeffrey
Ausiello: The introduction of political consultant Susan Weller (played by Lauren Stamile) in last night’s episode will lead to “Dawson, from a distance, being a little bit suspicious of this woman’s intentions” with regard to Casey, executive producer Matt Olmstead previews. While Dawson “gets a bad hit” off Susan, she doesn’t “want to come forward and come across like the jealous girlfriend who is not thinking about this objectively. So she’s letting Casey do his thing.” 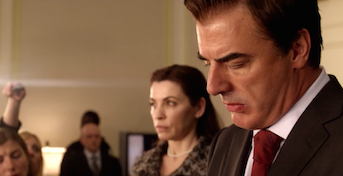 Question: My mom has been bugging me all week to ask you if she will be satisfied with The Good Wife‘s ending. Is the rumored Will Gardner appearance a dream sequence or flashback? —Bill
Ausiello: If your mom likes it when series finales serve as the perfect bookend to a show’s pilot, then, yes, your mom is going to be satisfied with The Good Wife‘s ending. As Julianna Margulies revealed in the current issue of Entertainment Weekly, the episode will find Peter and Alicia once again “standing at the podium” at a press conference and “you’ll see a very subtle thing at the end that she does physically with Peter that’s very different from when you first met the two of them.” (My guess: A lint brush is involved.) BONUS SCOOP: I’m hearing the aforementioned presser is thankfully not the final scene of the episode/series.

Question: I would love any info you can give us on Hawaii Five-0‘s big Steve-and-Danny season finale. —Lisa
Ausiello: As part of our May Sweeps Preview Extravaganza (coming soon!), showrunner Peter M. Lenkov told Matt Mitovich that May 13’s two-hour season ender is “very serious” stuff, involving as it does, among other things, a thrilling set piece where a tiny plane must land on a tiny island. “McGarrett ends up getting shot, and Danny, who’s never flown a plane before, has to land their plane,” the EP previews. “The stakes are really big.”

Question: Are we going to see Michael and Jane’s wedding before the end of this season of Jane the Virgin? I loved that they didn’t show Jane’s dress — it makes me feel like I’m one of their wedding guests waiting for the big reveal! —Drew
Ausiello: I can confirm that the season finale, “Chapter Forty-Four,” will at the very least include a wedding rehearsal. And I know this because the show is looking for a middle-aged Latino actor to play the priest who is set to marry Jane and Michael. “Father Felipe,” according to the casting notice, “is irritated that Michael is running late for the rehearsal and wants to ensure everything goes right on the big day.” Now here’s my question for you, Drewski: Why the frak is Michael running late for his wedding rehearsal?! (These are the things that keep me up at night, FYI.)

Question: Orphan Black is back and I’m in dire need of some scoop, preferably of the Krystal variety. —Brett
Ausiello: Forget, Krystal. Felix is finally getting his own storyline, separate from the clones! Knowing that “he’s the only one that’s not a blood relation in this non-traditional family” will set Sarah’s foster bro on a “personal” journey in Season 4, executive producer Graeme Manson previews. “While everybody else has been hiding out, Felix has been left to himself [to ask] a lot of questions about his own origins, and a lot of those questions are going to be answered.” 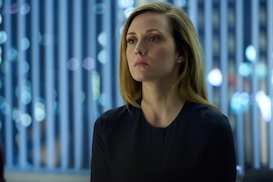 Question: A while back, BBC America released an In Memoriam video for every death on Orphan Black. Delphine was the last character included. Is this confirmation that she’s really dead? (Please no!) —Billie
Ausiello: While co-creator John Fawcett would neither confirm nor deny that Delphine is a goner, he did allow that there remains “some mystery” regarding the Dyad CEO’s fate in the wake of her getting shot in the Season 3 finale. My guess: She’s aliiiiiiiiiive!

Question: Anything on The Flash? —CeCe
Ausiello: If you suspect that kidnapped Caitlin will angle to be Beauty to Zoom’s Beast and chip away at his defenses while in captivity… you’d be wrong. “No, that doesn’t happen, which is actually kind of refreshing,” Teddy Sears shares. That said, “We eventually ‘pierce the armor’ and see why he’s taken her,” though his exact agenda for his ex “won’t be immediately clear.” Caitlin, though, would be wise to worry. After all, her captor “is ‘off,’ he’s broken, he is not a linear, level-headed guy,” Sears observes, “and he eventually makes a decision which gets us to where we go next.”