You’ve already crossed Lucious Lyon with some vicious corporate espionage (whatever happened to Judd Nelson’s Billy Beretti, anyhow?), slept with his youngest son (not just once, I might add!) and even screwed Mimi Whiteman in an attempt to screw the Empire Entertainment founder out of his CEO chair.

Would Fox’s hip-hop soap opera really go that dark? Um, as sure as Cookie keeps a broom in her closet for the sole purpose of beating Hakeem’s ass!

Let’s briefly recap the action, then get Grace Gealey’s take on what’s next for Anika between now and the season finale.

BARBERSHOP DUET | Wait, isn’t Freda Gatz signed to Empire Entertainment? So why is she working at a barbershop? Is this the new definition of “keeping it real”? Could someone hand a clue to your white, gay, middle-aged recapper! 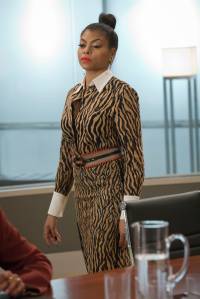 Bottom line is, now that Cookie knows Freda’s dad was late drug kingpin Frank Gathers — the man Lucious murdered to save Cookie’s hide – she’s all, “I don’t want that dangerous bitch around my boys!” And so, she scores a coup for Jamal — getting Empire’s version of Nicki Minaj (the possibly even more cartoonish Stacey Run-Run) to agree to collaborate on two tracks on his Black and White Album. There’s just one catch: Her deal won’t allow for any other female MCs on the record, a provision that clearly pains Jamal, but which Freda totally understands. When Stacey sends her verses from Tokyo and blows off Jamal, though, he tells his mother that for once, they’re not on the same creative page, and goes back to beg a sullen Freda to make beautiful music together. I’m just hoping this doesn’t end up with Freda’s gun pointed at Jamal’s head. (Please, Empire writers — anywhere but the face!)

BOOBOO BAY-BAY | Rhonda’s still using Anika’s guest bedroom, which means she and Andre wind up with a front-row seat to her violent morning sickness. They realize she’s carrying Hakeem’s child, and arrange a detente between Anika and the Lyon clan that implodes with Cookie swatting Hakeem for his failure to use a condom and screaming at Fake-Ass Lena Horne, “Are you that thirtsy, you trick-ass ho?” (Line of the night: Jamal’s “This family uses the terms ‘heir’ as if it were in a Shakespearean play!” Too bad that seconds later Jamal has to absorb Lucious’ bombshell that little Lola isn’t his child or even his grandchild. “Her daddy’s name is Marcus Jones,” sneers Lucious, who ran a DNA test after Thirsty plucked a lock of the kid’s hair on the playground!)

Later, Lucious creepily appears in Anika’s living room, offering her $10 million to give the baby to Hakeem and exit their lives for good. She won’t hear of it, though, claiming she just wants her child to have a family. (Oh, Anika, not this one, though!) She reminds Lucious that up ’til now, she never ratted him out to the FBI, but Lucious ups the threat level without even raising his voice: “A lot of women — they don’t survive childbirth.” DUDE, THAT IS NOT OK!

SHARE AND SHARHOLDERS ALIKE | It’s not enough for Lucious to be horrible to only one person per episode, so he spends most of the hour lobbying the company’s richest investors, bonding with Andre (just to win back his loyalty) and then sabotaging Hakeem in the middle of a shareholder’s meeting. (Did I mention he even has Thirsty steal the Anthony and Cleopatra prototypes — one more indignity for poor Camilla.) Faster than you can say “Bottomless Mimosa,” the board votes out Hakeem. “You can tell your kids you ran Empire for all of 10 minutes,” Lucious smiles, as if Father’s Day isn’t right around the corner. 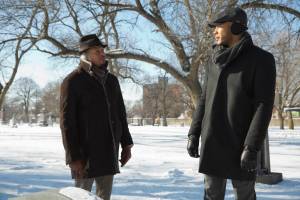 PUTTING THE LIE IN LYON | Of course, Lucious is riding high on a wave of good publicity and AMA buzz over his autobiographical “Boom Boom Boom Boom” video. He even takes Andre to his grandmother’s grave to help him make sense of his bipolar disorder, and it’s pretty touching, save a line that was clearly written by Siri: “Medical science has made things more hopeful for people like us.” Andre, though, inspired by Rhonda’s admission that she was happiest when they were backstabbing their way to the throne, sells out Hakeem, spilling key intel to help Lucious sabotage the shareholder’s meeting. I wonder if he’d have handled the situation differently had he known that Grandma Dearest was still alive! Oh, yeah, reports of Lucious’ mother’s suicide appear to have been greatly exaggerated. As the episode ends, Thirsty drops off an envelope of cash at a nursing home in New Hope, Penn., and there sits a woman singing “Mona Lisa” — and all signs point to her being Mrs. Walker.

And on that note, let’s get to our Q&A with Grace Gealey:

TVLINE | Anika says she wants a family for the baby she’s carrying: But we know she has a mom and dad of her own, people who seem relatively stable. Why would she want or need the Lyons now? Wouldn’t it have been smarter to never let them know Hakeem is the father?
The great part about this episode is that you see [Anika] actually get to consider these exact things. Is she going to keep the baby or not? Is she willing to finally disconnect from the dangerous lure of the Lyon family? Does she even want Hakeem to truly know that this is his baby or is she willing to have the baby and raise it alone? You see her go back and forth about the decision, and then she comes to a conclusion with the help of a few Lyon family members — believe it or not. 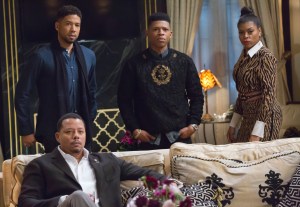 TVLINE | To that same end, how do you view Anika’s agenda in coming to Lucious, Cookie and the family and asking them to be in her and her baby’s life? Is this a grab for power?
I honestly feel like this is a moment where she focuses on the heart of the matter. Sure, she can use this as a power play, but truly, at this point, she needs nothing from the Lyons other than a family for her child. Somewhere deep down inside, I feel like she sees this as a debt to be paid to her, since she was put in such a difficult position by the Lyon family to begin with. What’s interesting is, Anika receives much judgment and blame for her twist in desperation, which has caused her to not exactly do the best things. But people forget that she was forced to this point by the betrayal of Lucious when he slept with Cookie. Under all of her terrible decisions is a woman full of humanity that has little guidance and support. This is where her unwise decisions stem from.

TVLINE | How did you not crack up at Cookie’s snarling, “Girl, bye” response?
There have been quite a few times I haven’t been able to hold it with Taraji [P. Henson]! She is downright hilarious. For the tension of the scenes to work, I stay rooted in character, but man! She has me rolling every time they yell cut.

TVLINE | Is there any chance Anika wants Hakeem or Lucious back?
Hakeem, nope. This was a phase where she was desperate enough to fool herself into thinking she wanted Hakeem and he wanted her. They will always have a warmth for each other, but not in the “relationship” kind of way.

Lucious, possibly. I think deep down inside, Anika will always have a soft spot for him. But he is dangerous, and I think she’s beginning to fully realize that.

TVLINE | That scene with Lucious in Anika’s apartment was fascinating. What’s your take on Lucious essentially attempting to “buy” the Lyon heir for $10 million and shunt Anika to the side? Do you think that surprised her — or is that exactly what she expected?
She completely expected that. She’s worked with Lucious for years and knows what the Empire means to him. She also knows he’s a businessman and expert negotiator — she’s seen him in action. But that’s the beautiful thing about being his ex-Head of A&R; she can handle his business prowess and snarl it right back. But this is also the scene where she begins to realize Lucious is much more dangerous than she ever realized. That makes it even more delicious to watch. Will she keep pushing forward or will she back down?

TVLINE | I thought it was interesting how she said her baby was worth a lot more than $10 million. Is there any chance in hell she’d abandon her child for a payout? Or was she saying that to antagonize Lucious?
Remember, Anika came from money, so although she’s ambitious, the financial aspect doesn’t impress her with Lucious. What impresses her is that she finally is in the position of power: She has something he wants. She is now the lead negotiator. She knows she has him in a difficult place, and she’s driving this conversation to what she really wants to talk about with him: His initial betrayal and the fact that she feels he is partly responsible for even putting her in this position. In her mind, if he had never cheated on her — twice — with Cookie, then everything after never would have happened. Now, she gets cornered with this unborn child that she may have to parent alone. Her thought is, why should she have to deal with this by herself? This scene turns into a post-breakup conversation that they should have had a long time ago. The question is, after this conversation, do they finally get the closure they need? And does she receive what she wants from Lucious in the end? 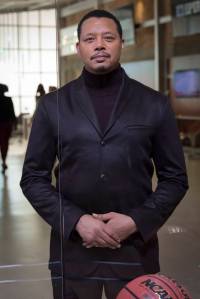 TVLINE | Anika’s threat to go to the FBI: Was it foolish to play that card? How much danger has she put herself in?
It was a very dangerous play by Anika. But she’s testing the waters and letting Lucious know she’s serious about coming head-to-head with him. She feels used in more ways than one, and this was her trump card. It was a bold move and she’s definitely poking a sleeping dragon.

TVLINE | Tell me about playing that scene with Terrence Howard — with Lucious touching Anika’s arm and suggesting a lot of women don’t survive child birth. How creepy was that?
Terrence is phenomenal. Our scenes have a way of being kind of electric — it was such a bizarrely layered scene, because there is a level of chemistry between them, but also danger. Juxtapositions completely led that scene; she was scared but beguiled. He was frustrated but challenged. They both felt the old flame of passion, but their pride dominated. It was an amazing scene to play with Terrence.

TVLINE | A lot of folks are convinced Anika pushed Rhonda down those stairs in the winter finale. Kaitlin Doubleday told us to expect a “dynamic, crazy, insane, scary” confrontation between Rhonda and her attacker in the Season 2 finale? What can you tease about how that arc will play out? What do you say to folks who are convinced Anika is (or isn’t) the one who pushed Rhonda?
All I will say is, you gotta watch it. I promise you — the less I say, the more gratifying it will be for you to experience. You’ll thank me later!