If you watched the premiere of The CW’s intense — and very bloody! — viral outbreak thriller Containment on Tuesday, then you probably aren’t getting within 4 to 6 feet of someone in the near future. But was the show’s debut contagious in a good way?

Before you weigh in with your diagnosis, let’s recap the pilot:

Adapted by Vampire Diaries/The Originals producer Julie Plec from the Belgian series Cordon, Containment presents a scenario in which hand sanitizer won’t save you: A young Middle Eastern man sneaks a ride to America in the hold of a cargo plane and brings with him a modified version of avian influenza, as later identified by CDC researcher Dr. Victor Cannerts (played by Casualty‘s George Young). Patient zero falls ill and infects his doctor, his entire family… and potentially all of Atlanta. Enter federal official Dr. Sabine Lommers (The Originals‘ Claudia Black), who erects a barrier — known as a “cordon sanitaire” — around a portion of the city in order to keep the virus from spreading.

Inside the quarantined area, we meet Katie (played by Being Erica‘s Kristen Gutoskie), an elementary school teacher who picked the most unfortunate day for a field trip to the hospital with her class (which includes her son). She’s now on lockdown with the kids and hot-headed cop Jake (a super muscular Chris Wood from The Vampire Diaries). On the plus side (for viewers, at least): Katie and Jake are already registering a “10” on the Unresolved Sexual Tension scale, and this is only Day 1 of the “stay 4 to 6 feet apart” rule. And they have a ready-made ‘shipper name: “Jakie”!

Also stuck inside the fenced off area is very pregnant teen Teresa (Spartacus: War of the Damned‘s Hanna Mangan Lawrence), whose boyfriend is on the other side. They’re not the only lovers separated: While his commitment-phobic girlfriend Jana 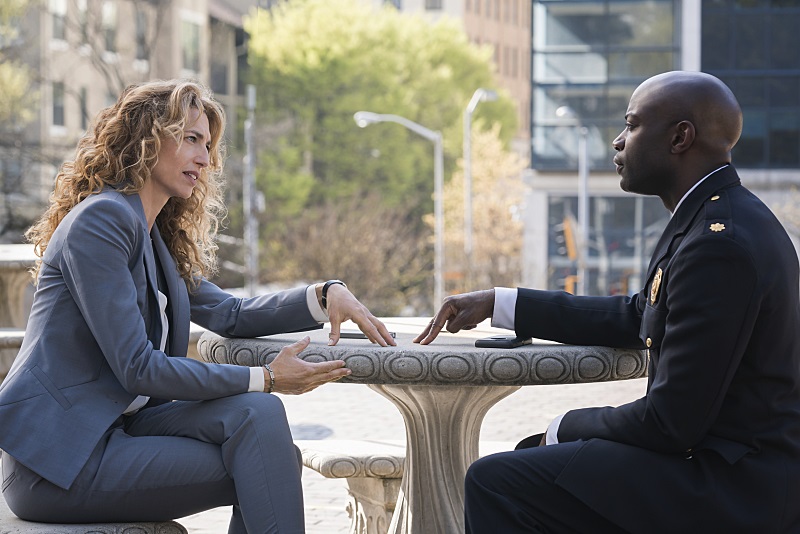 (Nikita‘s Christina Moses) is trapped at work, Dr. Lommers taps officer Lex Carnahan (Interstellar‘s David Gyasi) on the outside to be the trusted face of the quarantine and to keep the peace. He’s reluctant to take on the position if it means toeing the party line, but later realizes being part of the inner circle is the only way to get information about what’s really happening inside the cordon with his girl and his pal Jake.

The disease, which is fatal in 100 percent of its victims, generates big stakes… and maybe a few queasy stomachs, too. With its spewed blood and crud, Containment is one of the grosser things The CW has ever aired. And while in media res openings have been done to death, the show makes good use of its first minutes, which reveal that two weeks after the so-called temporary quarantine was issued, things have only gotten much, much worse. People are looting, the police are shooting the infected left and right, Theresa is laying in the middle of the street, clutching her stomach, and Katie is screaming for help as she carries a bloody child.

What did you think of Containment? Grade the series premiere in our poll below, then hit the comments to back up your choice!

Press PLAY below to watch the Containment cast and producers talk Walking Dead comparisons and more.