Though Supergirl has spent the last 19 weeks battling crafty bad guys and Fort Rozz escapees, it turns out the CBS drama’s producers are the most sadistic villains of all.

Just as Kara Danvers was feeling prepared enough to take down the Myriad initiative, last week’s episode found the titular heroine pitted against her own sister, who had become possessed by supervillain Non — and viewers have been left hanging for the last week to see how the siblings’ fight ends.

According to Chris Vance, who plays the vengeful Non, Kara and Alex will be “left in a catch-22” when Monday’s season finale (8/7c) begins, especially since Alex’s life isn’t the only one at stake.

“Neither of them can quite step away from it, even though they obviously love each other dearly,” Vance tells TVLine. “It’s an interesting [situation] that ramps up… in terms of Kara’s greatest challenge, not only to save her sister, but every man, woman and child on the face of the planet.” 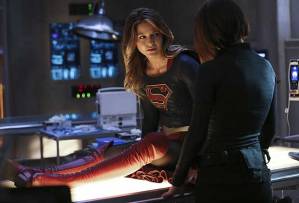 As for Non himself, the Kryptonian foe will still be on a mission to avenge wife Astra’s death, but the events of the finale might just have him second-guessing that decision to activate Myriad and endanger a family member.

“[Non is] responsible for Astra’s death, and therefore, it makes him responsible for fulfilling her original vision, which was to save the planet by the use of Myriad,” Vance explains. “But information keeps coming to Non in which his conscience is tweaked. After all, Kara Zor-El is family to him. To give him that compassion and humanity underneath everything — it causes him to not necessarily make the decisions that he should be making. That’s his biggest dilemma.”

And even though Non’s inner conflict could mean good things for Kara, Alex, et al., Non’s newest partner in crime, Indigo, will be none too pleased by his newfound morality. According to Vance, “they’ve both got their own agenda, and they’ll use every manipulation technique they can to both get their way and employ the other person’s help to do so.”

Though he can’t give much away about the eventual success or failure of Non’s master plan, Vance hails tonight’s season ender as “really intelligent, fun” and “one of the better episodes of the season,” in part because it will pose a tough query to viewers.

“It’s a very interesting philosophical question that the writers have brought in, which is whether humanity is actually destroying the planet,” Vance teases. “Non’s conviction is absolutely, from his experience on Krypton. It’s a question that brings more dimensions to just playing a supervillain.”

What are you hoping to see in tonight’s Supergirl finale? Hit the comments with your predictions for the episode.