Warning: The following post contains spoilers for the Season 1 finale of Supergirl.

The producers of Supergirl made an excellent case for renewal to the CBS CEO, with a Season 1 finale on Monday that ended on a massive cliffhanger: Who — or what — is in that pod?

Let’s back up a bit, and briefly recap what went down in the season ender: After successfully releasing National City from the grip of Myriad’s brainwashing, Kara was tasked with her toughest missions yet — finding and destroying Non and Indigo to stop them from killing the human population (check!) and sending Fort Rozz back into outer space (check!).

But perhaps the most interesting events transpired after Kara had successfully saved the Earth. First, she and James finally got a chance to talk about that lip-lock from two weeks ago, and when James presented Kara with a candid picture he’d snapped of her a while back, the two exchanged another kiss — and this one didn’t end with James getting overtaken by an alien force.

And just as Kara began to celebrate her major victory of the day, surrounded by family and friends, a Kryptonian pod that looked remarkably similar to Kara’s crash-landed outside her loft, and whomever (or whatever) was inside gave Kara a major shock — even though the home audience didn’t become privy to the visitor’s identity.

For an explanation of that cliffhanger and more of the episode’s highlights, we chatted with executive producer Ali Adler. Read on for her finale insights:

TVLINE | Walk me through how you guys constructed this episode. Did you know, going in, that you wanted to end on a major cliffhanger, or was it something that came about as you broke the finale?
Traditionally, we want to add as much intrigue into next season as possible. What we did was answer a lot more questions. It’s a classic journey where [Kara] has to sacrifice herself for the greater good, and that’s a trope of comics. We started this season with her asking that real question of “Can I do this?” Tonight’s episode answers, emphatically, that yes, she can. Hopefully, getting into a second season, we can explore some other questions she might have. 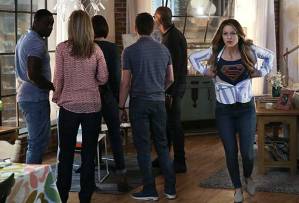 TVLINE | Potentially silly question: Do you guys already know who’s in that pod? Or is that yet to be determined?
[Laughs] Hashtag-who-or-what-is-in-the-pod. We’ve absolutely had conversations — we’re waiting to tell CBS. In the spirit of good, old-fashioned cliffhangers, we certainly answer many more questions in terms of her trajectory with Jimmy Olsen, her relationship with Alex. We prove what an incredible hero she is. She was sent to save this world, and she does.

TVLINE | This episode had some really high stakes, and Kara is told multiple times that she’s on a suicide mission. Did you and your fellow producers feel the temptation to go dark with this finale and potentially kill off a cast member, even if it wasn’t Supergirl?
You know, we got pretty close. And while Kara is a lone hero, what we’ve shown all season was this idea of “stronger together.” We’re all bonded by blood, even if that is a love bond. We choose our families, and had it not been for her Earth family, Kara might not have survived.

TVLINE | I was pleasantly surprised to see Maxwell Lord and Kara become quasi-allies in these past few episodes. How did that relationship develop in the writers’ room?
We always say that the villain has to have as rational a point of view as the hero. For Maxwell Lord, it’s a very realistic stance. It’s the belief that if [aliens] have powers and they come and we can’t match them — his whole stance this season has been preparedness for a more nefarious alien, and he was right. When push comes to shove, he’s for the good of the planet. Sometimes, it’ll look like he’s just for the good of Maxwell Lord, but it was always about protecting the Earth.

TVLINE | Max has also got a romantic, flirtatious vibe with Cat. Is that something you guys are hoping to expand upon in a possible Season 2?
We’ve loved their chemistry all season. It’s been very palpable. They have a history together. Cat is not one that really shares her feelings. Once upon a time, I think maybe he hurt her. She plays things close to the vest, and they have a long history.

TVLINE | Before I ask anything else about a potential Season 2, what have you heard about a renewal?
We heard very positive things, unofficially, from Les Moonves. [CBS Entertainment President] Glenn Geller and [executive vice president of current programs] Bridget Wiley — they’ve all been very, very supportive. We’re definitely talking about what Season 2 looks like.

TVLINE | Alex and Kara had a couple of really emotional scenes in this episode, and I was wondering if the cruel things that Kara said while under the influence of Red Kryptonite might be revisited. Do you plan to dive into the bigger issues the sisters have been having in recent weeks?
That’s a really astute observation. We’d definitely love to explore that. We’ve talked about how there’s very few adult sibling relationships on TV, and this one is exceptional — not just because of their superpowers or Earth powers. It’s a very interesting partnership. We absolutely will explore what it feels like to have a sister who is not only super, like Kara is, but who is incredibly experienced in the world, the way Alex is. 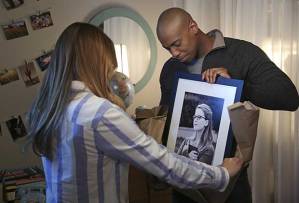 TVLINE | As for James and Kara, we saw the door get opened for a potential relationship in Season 2. Where do you hope to take that relationship, given the roadblocks that James has had in past romances?
[Laughs] It’s a little satisfying to see [them kiss]. We wanted to pay off the chemistry that we’ve felt all season from them and see how we could set up the possibility of exploring a relationship. We’re definitely talking about [a relationship] in Season 2. Sorry, I’m being vague on purpose. [Laughs]

TVLINE | Will the hunt for Jeremiah be a priority in Season 2?
Absolutely. We know he’s out there and ostensibly alive. We would be fools not to use one of our strongest assets in Dean Cain. He’s been so fabulous and courteous. We would love to have him back.

TVLINE | Speaking of male characters we haven’t seen much, I have to ask: Do you plan to cast Superman? He’s been showing up quite a bit in recent episodes.
It’s always a conversation. I’ll come back to the answer that this is Supergirl’s show, and it’s her point of view. But he lives in our world, and at some point, we’d definitely like to meet him.

What did you think of Supergirl‘s season finale? Grade it in our poll below, then hit the comments to back up your choice!