As Fox’s recently renewed drama (Mondays, 9/8c) lets loose with its final two episodes, the title character has just discovered that he is not losing his mojo as a whole but instead is powered down when in the company of confidante Detective Chloe Decker. How will the Prince of Darkness navigate this stickiest of wickets? Series star Tom Ellis spoke with TVLine about that vexing matter, next week’s finale, the drama’s wickedly funny bone and more.

TVLINE | Full disclosure: I was slow to pick up on Lucifer, but some of our readers kept talking it up and once I got to it, man…. This is a fun show, and a funny show.
Oh, thank you. Thank you. That was one of the things that first drew me to the pilot script, how funny it was.

TVLINE | You have better zingers than half the sitcoms out there.
[Laughs] That was a genuine reaction of mine to the pilot, because I’d been sent a lot of scripts, a lot of half-hours and a lot of dramas, and Lucifer was funnier than all of them. I’m glad that we’ve managed to keep that going, because for me that was a big part of why this show is different.

TVLINE | But is it a challenge to keep the character somewhat modulated, so he’s not “too much”?
Yeah, we have to be careful. Lucifer likes to have fun, but we need to make sure that hes also rooted in a proper journey. For the first few episodes after a pilot, you’re just trying to establish your world and the starting points for your characters. But I feel like as the stakes went up, the Lucifer veneer got less and less. His playfulness still exists, but hes got other things to deal with.

TVLINE | Including the notion 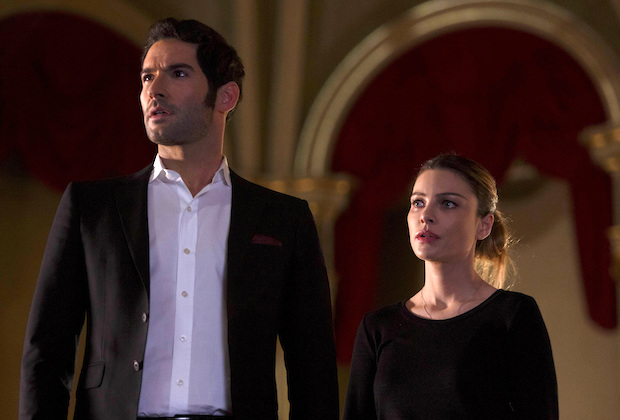 that he is “vulnerable” around Chloe (played by Lauren German). What is his immediate reaction to that realization?
Well, this next episode takes place three weeks after that revelation, and you realize that Lucifer has spent that whole time avoiding Chloe. [Laughs] He still doesn’t want to believe that this is the case, that this person that he has met and sort of has developed a friendship and trust with, it’s all been flipped on its head. We start off with Lucifer feeling still compelled towards Chloe, but now incredibly suspicious and paranoid about who and what she is.

TVLINE | And he’s literally keeping her at arm’s length, if not more.
Literally, exactly! It plays out in a very comedic way to start with, but he does feel a bit betrayed, though he can’t put it into words.

TVLINE | Is there something larger and more nefarious at play there, other than “true love” dousing his powers?
Oh, I think so…. A few people have made that assumption, that maybe just because he’s in love with her that he’s gone soft, but our story is much bigger than that.

TVLINE | Whats his dynamic with Malcolm (Justified‘s Kevin Rankin) going to be like moving forward? The guy just tried to kill him, before getting bought off pretty easily.
That’s not the end of that story. Malcolm is someone that Lucifer had not really paid any attention to before, and as we enter the next episode Lucifer is brought into a case against his better judgement, because he’s trying to stay away from Chloe, and his path with Malcolm crosses again. Obviously they’ve now got this secret about what happened.

TVLINE | Will things start to thaw for him and Maze (Lesley-Ann Brandt)? It’s been pretty chilly between them the past couple of weeks.
There’s an appearance of a thaw. I think he doesn’t know what to think about Maze, so he starts to test her allegiance. The thing about Lucifer is that by the end of the first season his world is falling apart a bit. Anyone that he could call an ally or trust, he now can’t, and that leaves him in a place that he’s never been before. He asks himself the question: “Is this place any better or worse than the place I left?”

TVLINE | This week’s case revolves a Satanic cult type of thing led by Ross McCall. Tease Lucifer’s reaction to that, because it is very hilarious.
[Laughs] It is. One of the things I love about this show is the satire we’re able to produce about certain things. During the investigation they come across this sort of “church of Satan,” and it’s all his grievances about humanity summed up in one group of people, basically. [Laughs] He’s just had enough of the fact that people think he’s this thing that he isn’t. I think my favorite line is, “Why do they always obsess about goats? I mean I dont even like their cheese!”

TVLINE | Before the season is over, will we get a big face-off between you and D.B. Woodside’s Amenadiel?
Oh yeah, for sure. There’s a big one coming up in this episode, actually. Lucifer is fed up with letting everything go by and trying to be the bigger man, so I think he flips finally. He and Amenadiel have quite a huge fallout. (Watch an exclusive sneak peek below.)

TVLINE | What sort of finale are we getting next week? Big happenings?
I just spoke to someone who’d seen it and I loved their reaction to it; it was the same as mine. The finale has a very, very unexpected twist. One thing I will say is that when I read it I was like, “I really hope we get a Season 2 because it’s too good to leave on this note.” So, yeah — it’s going to surprise a few people. I’m not going to say too much more about it, but the last scene… it is pretty shocking.