This Tuesday on Marvel’s Agents of S.H.I.E.L.D. (ABC, 9/8c), it is time for the Secret Warriors to assemble. For better, or for worse.

With the Zephyr hijacked by the Inhuman Giyera and Coulson and most of his team subsequently captured, it falls on Daisy to rally her upstart speciality squad — comprised of Lincoln, Joey and Yo-Yo — and attempt a rescue. But in doing so, the heroes at large may be made susceptible to the most stealthy of saboteurs, setting the stage for what Chloe Bennet calls “the biggest game changer” since, well, S.H.I.E.L.D. came tumbling down

Here, Bennet elaborates on Daisy’s new role as a team leader, Hive’s insidious power and a possible “shake-up” for her character’s nickname.

TVLINE | How easy is it to assemble the Secret Warriors? Is there a process? Are there missed phone calls? Do you hit a lot of voicemail?
I think S.H.I.E.L.D. has a pretty convenient way. I mean, if it was Chloe assembling the Secret Warriors, I’d be, like, sending out tweets. Like, “Yo-Yo. Where are you? You’re not picking up.” But S.H.I.E.L.D. has it down to this cool, very super-hero, super-spy watch, and there are signals when they’re needed. I kind of geek out about it! But yeah, we finally have the Secret Warriors together. It’s not under the circumstances I think they wanted to get together in, but…

TVLINE | But it’s great circumstances. When the last episode ended, I was like, “OK, this is a true, organic reason for this specialty team to step up and get s–t done.”
Totally. It’s never going to be like, “OK. I’m ready as a leader, you guys are ready as a team. Let’s go out and see what happens!” It was a great excuse for them to [get together].

TVLINE | Among the team, who is the “Coulson” who lays out the exact attack plan?
Daisy. She’s the leader now, which is also a big step forward for her as a character and for me as an actress. She’s kind of finding her sea legs, but I think she has what it takes. She has obviously the talent, the ability, the strength, but it also takes practice. It’s something that you learn over time, with different situations and thinking under pressure. Being a leader is tough. You have to motivate but you have to make the right decisions and you can’t be selfish. But she has a good mentor in Coulson.

TVLINE | And to think that two-and-a-half years ago, she was just this grunge goofball with a laptop.
I know! I’m playing a completely different character than I auditioned for, but it’s cool. It’s crazy to think about where we’re at.

TVLINE | When you get all these different personalities together, as with the Secret Warriors, is it hard to keep everyone on mission? Are there any distractions? Clashing personalities?
There are always difficulties, I think, when you have a team of different people, but Daisy has been weeding out people for a while now. Her main concern for some time has been trying to find a team of people who are not only talented and powerful enough to get the job done, but also have the right motives for what they’re doing. So, between Natalia [Cordova-Buckley], Juan Pablo [Raba] and Luke [Mitchell], who play Lincoln, Joey and Yo-Yo, I think we have a really good chemistry as a team. And off-camera, we have, like, way too much fun. We all are in a text thread called “Secret Warriors” and we text each other every day.

TVLINE | You must have the silliest scenes to block and shoot because each of you has this moment where you’re “doing something,” but not really. Like, you’re holding your hand out to vibe….
Yeah, it’s ridiculous. If you see us on set, we look like a bunch of idiots. It’s a lot of Yo-Yo being there, and then we take her out, and then we’re surprised by her. It’s like we’re a bunch of kids playing make-believe in the back alley. But it happens to be our jobs, which makes it even more exciting.

TVLINE | Does anybody on the team get to unleash any cool new tricks, maybe use their power in a way we haven’t quite seen before?
I think their powers all together really make for something interesting. It’s almost like they’re different chemicals and when you use them together, it’s like, “Oh. We could do that? Not a problem.” That’s always fun to play with, but also you get to see that this is such a new team, and what’s reminiscent of the first season is you see this team kind of work together for the first time and the excitement of getting something done, like, “Oh s–t. That was awesome. Did you see what I just did? That was so cool.” The kind of energy that Skye had in the first season is back with Joey and with Yo-Yo. 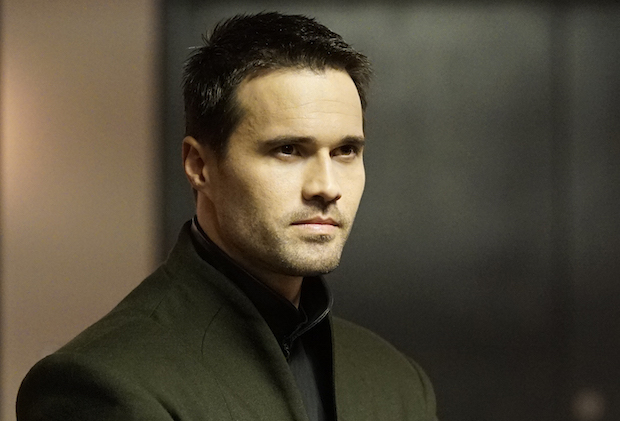 of tricks, what can Hive himself do, aside from ooze out the creepy stuff from his hands and his mouth?
I think you’ll find that that is more powerful than anything, because that can put people under sway and then he has full control of anyone he does that to. Essentially, he has everyone’s power. He has the power of any Inhuman that he does that to.

TVLINE | So, when he unleashes that weird stuff into someone, it doesn’t necessarily kill them…?
If they are human, it kills them. If they’re Inhuman, it does other things….

TVLINE | While the Secret Warriors do their thing, are Coulson & Co. doing their best to make some inroads on their end?
They’re kind of in a tricky situation at this point. They’re going to try their best, but I think what’s so cool about S.H.I.E.L.D. is they always have faith that they’re going to kind of be saved. It’s interesting to see that the team has been dealing with the topics of [Captain America:] Civil War for a while now. Everyone’s like, “How is the show going to tie into Civil War?” and I’m like, “Well, how is the movie going to tie into the show?” Because we have been dealing with the ideas behind Civil War for half a season now. You have these Inhumans that everyone is saying are so dangerous, but then you see them kind of come in and pretty much save the day. That’s something to talk about.

TVLINE | Lastly, settle this for me: I know Mac occasionally calls Daisy “Tremors.” But has anyone ever called her “Quake”?
No. Not yet. We’ll see if that happens or not. Mac calls her “Tremors,” but we have not officially had “Quake” used.

TVLINE | Because the whole “Tremors” thing, it’d be like if I’m in Top Gun and I’m the one guy who calls Maverick “Wild Guy.” But you’re not ruling out “Quake” as an eventual nickname for her?
Not at all. No. I think they just want to do it in a really fun, cool way.