Time was really not on Cassie’s side during Monday’s Season 2 premiere of 12 Monkeys.

After landing in the hellish world of 2043, the scientist transformed into something of a cold — but kickass! — action heroine simply as a means of survival. Her newfound skills were on full display when she traveled back to 2016, breezily/expertly shooting her way through a gauntlet of enemies before winding up in a tense standoff with Cole.

Needless to say, it was far from a happy reunion. Cassie was displeased to discover Cole is working with Ramse and Jennifer Goines, while Cole found himself taken aback by his friend’s demeanor. Then Cassie offered a shocking explanation for her change: While little time had passed for Cole in the present, Cassie had spent eight months in that awful future.

Below, Amanda Schull talks about Cassie’s “adaptive” personality and the surprising identity of the person who helped her tap into her newly discovered physical strength. Plus, the actress previews Cassie and Cole’s struggle to get back to where they were.

TVLINE | Eight months is a substantial amount of time!
It’s a long time for her because the world is also so dramatically different than the one she’s used to. It’s not just like spending eight months in, I don’t know, Michigan. It’s eight months in a post-apocalyptic existence worse than Hell, in some regards, because of her original introduction to it with the messengers and the machine overloading. Everything about it is pretty shocking to her system.

TVLINE | There’s so much going on when she appears in the future. There’s The Twelve, there’s Deacon, the whole place is kind of falling in on itself next week. How is she adapting to that gritty world of 2044?
I said before and I can’t stress it enough, Cassie is a very adaptive person. She is smart and cunning, actually. We see that numerous times, even in Season 1 when she has to come up with little white lies on the spot to be able to get what she wants or needs to further her mission. While she does like a good plan, she’s also capable of going with the flow and not just surviving, but excelling. That’s something that not a lot of people would be able to do in [these] circumstances. But she, of all people, is able to — for lack of a better word — thrive in this pretty horrible existence. 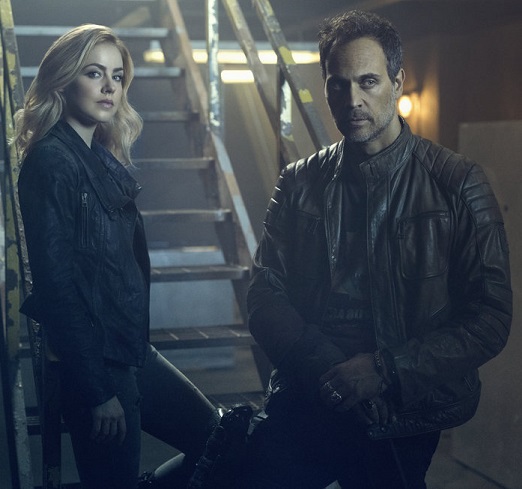 TVLINE | How have her new surroundings changed her as a person?
The best way to survive in that world is to toughen up. Getting to know Deacon has been very educational for her, because she needs to do more than be smart. She also needs to have the brawn to back up the brain. So that’s what she learns. She learns because she has to.

TVLINE | That scene where she’s double-fisting the guns looks so great. I remember when I first saw a photo of it, I thought, “I don’t know what’s happening, but it looks so badass.”
I know. [Laughs] That was really one of the first times that I got to do the weapon work. I had been working on weapons training before we started shooting. I would go into a facility and I’d learn about the guns, because I’m not very familiar with them. In that scene with the two guns, they show it, but they cut slightly above it so you can’t really see everything that I’m doing:  I was originally going forward and reloading my weapon while not even taking my eyes off of [Cole]. So I practiced walking forward, not ever looking [at the gun]. I remember my weapons trainer was off on the side watching me do it, and he gave me a couple of notes about it. Then, when I got to shoot [the scene] and I felt comfortable doing it, I walked over to him afterward, and he was like, “That was smooth as f–k!” I was like, “Oh, I don’t know how my family’s going to feel about me being so comfortable with a handgun, but thanks.” [Laughs] 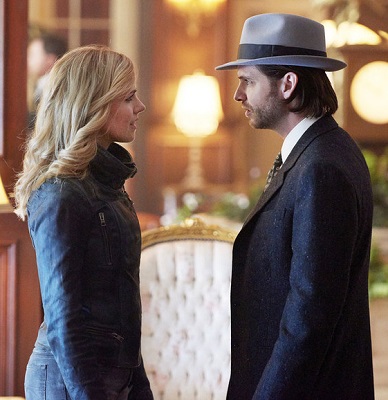 TVLINE | There is a coolness and a calm about Cassie when she’s shooting at those people. She’s clearly become hardened. Can Cole even reach that part of her that bonded with him?
Well, we have the whole season to find out. But the two of them have a connection that neither one of them understands, and there’s a lot covering that up, especially at that moment, and a lot of confusion and frustration and resentment. And also, of course, superficial anger. When he defends Jennifer Goines and also brings Ramse back into the fold, it’s infuriating. Because, obviously, there’s relief when she first sees him, and then just complete perplexion as to, “How are we not where we were? And why are these two people still even breathing air? They should no longer even be part of our reality right now. They should be wiped off the face of the Earth, and they’re a liability.” So there’s suddenly this additional muck covering up this bond, and it’s going to take a while and some digging to get back to where they could be.

TVLINE | I think it’s safe to say Cassie and Cole grew very fond of each other last season in more than just a friendly way. Is there still a hint of that this year even though they’re on the outs a little?
Are you trying to make me spill secrets? [Laughs] I don’t know if you’ve ever had an experience when you meet somebody and you know you’re supposed to know them, and you know that your life is forever changed because this person just walked into your world. That’s something that the two of them have, and I don’t think they can even begin to understand why. Because it makes no sense that these two people should even exist in the same time, that they should even know each other. Their worlds are so different in every single possible respect. Also now, with who Cassie is, if she opens herself up to anything meaningful, there’s a very big possibility that it’ll just disappear and it’ll hurt that much more. So it’s just a lot safer to callous, because if she allows even a peek at her heart, it could get very damaged.

12 Monkeys fans, what did you think of the season opener? Grade it via the poll below, then hit the comments to back up your pick!