So, after several weeks of pre-emptions, we learned Alicia’s answer to Peter’s “one last favor” request/cliffhanger — even if it wasn’t shown on screen. But the fact that The Good Wife‘s titular protagonist did a solid for her soon-to-be-ex, and held off on publicly announcing her intent to divorce the Illinois governor, hardly matters in relation to the way this Sunday’s episode ended.

With barely a moment’s hesitation, Alicia finally got real with her reason for (not) getting out of bed in the morning (AKA that tattooed hunk of sexual energy named Jason Crouse).

“What do you want?” asked Jason, after a few days of tense phone calls and stilted conversations in the wake of Alicia telling him about her decision to formally end her marriage.

And, knowing she’s with a man who above all else likes to keep things simple, Alicia limited her response to a single, well-place syllable: “You.”

It almost doesn’t matter how Jason responds. He could sling Alicia over his shoulder, take her to the bed and leave nothing but the skin over her bones*, or he could sprint to the nearest airport and return to the land of hipster beards and earnest energy where Courtney Paige (remember her!?) sent him midway through the season. No matter the case, Alicia is finally saying “Yes!” to authentic living, “Yes!” to her own personal needs as a human being, and “No!” to unnecessary obligation and judgment from the people around her/the world at large. (*Yep, that’s a Moonstruck reference.)

And with only a few weeks until The Good Wife takes its final bow, that’s the kind of character development that makes me extraordinarily happy. (Now, if Cary could just take his Lockhart-Lee exit money and wind up in an isolated beach hut with Kalinda — the way Olivia and Jake did on Scandal once upon a time, then I might have to dial 1-800-Flowers and see if they have an address on file for Robert and Michelle King!)

With that said, let’s recap the major plot points from Season 7, Episode 19, “Landing”: 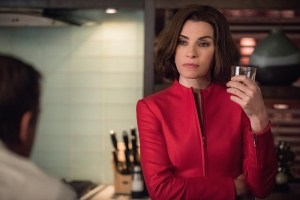 “SO WE’RE RIGHT BACK WHERE WE STARTED, HUH?” | Yep, that quote from Peter to Alicia says it all. Righteous but still kinda weasel-y U.S. Attorney Connor Fox has Peter arrested for arranging a mistrial in the case of a donor’s son’s murder trial — in exchange for campaign donations. And despite a promise to schedule the arrest on Peter’s terms, Connor ambushes him at Alicia’s apartment and subjects him to a handcuffed perp walk for the media. Alicia’s last-minute intervention — slapping a tie on her estranged hubby and walking alongside him — proves more emotionally stirring than I’d anticipated, but in the end, Mr. Fox’s best plea deal is three years — not merely probation, but actual jail time. Is Peter guilty? He hasn’t said he’s innocent to Alicia — and that leads me to believe that once again he’s put his wingtip shoe right into a pile of ethical doo-doo. Now, the question is whether or not Mike Tascione, Eli Gold and that little dog can find a loophole to save him.

CHRISTINE BARANSKI, I MIGHT MISS YOU MOST OF ALL | A key subplot finds Diane’s husband Kurt coming to her with what looks like a suggestion to divorce, seeing how they’ve spent maybe 98 days together in their first three years of marriage. It turns out, though, he just wants to sell his business and move in together, news that makes our hard-charging legal eagle knock her teeth into Kurt’s (before they presumably knock boots). When Kurt asks her to review the contracts for his company’s sale, Diane realizes her man has hugely undervalued his business — and is planning to sell it to a pert, blonde Republican gal (the fantastic Megan Hilty) who is exactly his brand of weakness. Diane’s likely f-bomb detonation is cut off by some crafty editing, but needless to say she is not feeling Kurt’s handshake agreement. When he comes to her office later, we expect the worst, but he puts his pride aside, his bank account in his line of vision and his love for Diane above all else. He’ll find another buyer, he says. And Diane’s tearful response is a thing of subtle, joyous beauty. Can some smart network cast Ms. Baranski in a fall 2016 pilot: I can’t live without my weekly dose, dammit! 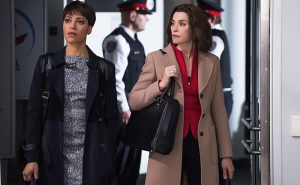 CASE OF THE WEEK | The “C-list Edward Snowden” (Zach Woods’ Jeff Dellinger) is back in a loopy, Canada-centric case that’s full of Good Wife whimsy and perhaps one last showing for the NSA boys. Alicia and Lucca (who’s not a fan of our “too clean” northern neighbors — LOL) eventually get Jeff asylum in Canada — and learn in the process just how much of a wire tap the NSA has on Alicia. I mean, that hot mic business is intensely unnerving, no? I like that we see flashes of Lucca’s patriotism — Jeff’s intel spilling to Wikileaks is “treason” the plucky associate notes, making me crave a Cush Jumbo-led spinoff — but Alicia notes Jeff’s not their first guilty client.

IN OTHER NEWS | Jason gets hired by Mike to investigate how solid Connor’s case is — awkward, since he’s totes unaware of the Jason-Alicia dynamic — but when Mr. Crouse goes to visit Cary (who was working in the state’s attorney office under Peter) he realizes that Alicia’s one-time business partner may or may not be a damning witness. “Does Peter have any reason to be concerned about you?” Jason asks. To which Cary replies, “Only if he has reason to be concerned about the truth.” Rated D… for Day-um!

What did you think of this week’s Good Wife? Hit the comments with your thoughts!