ABC’s Once Upon a Time, having previously hinted at Mulan’s feelings for Princess Aurora aka Sleeping Beauty, this Sunday pulled a li’l bait-and-switch in revealing its first LGBT pairing.

Yes, Mulan (played by Jamie Chung) was on hand for this week’s flashbacks, which centered on Dorothy (Teri Reeves) realizing that the Wicked Witch has been banished back to Oz. Picking up where they left off in Season 5A, Mulan had been helping Ruby (Meghan Ory) track her pack, to no avail. When the ladies meet Dorothy, the wrong kind of sparks fly, born out of Miss Gale’s aversion to werewolves. But when “Kansas” and “Wolfie” set out on a mission together, they realize they have more in common than they originally believed.

When Ruby saves her and Dorothy from flying monkeys by wolfing out, the latter appears to be a bit spooked and goes to be by herself. When she does so, Ruby confides in Mulan that perhaps she was looking for the wrong thing this whole time — her pack, instead of someone like Dorothy, who has stirred feelings she’s never felt before. Knowing all to well about not expressing feelings in time, Mulan urges Ruby to open up to Dorothy — but “Kansas” has disappeared into the night.

This all folds into the Underworld story when recently discovered Ruby explains to Snow White & Co. that she used a locator spell to follow Zelena, hoping to learn what she did to Dorothy. Z reveals that she cast a sleeping spell on Miss Gale, and as we all know, only True Love’s Kiss can break it. The heroes make a beeline for Auntie Em, who in Underbrooke runs a chicken-and-waffles hut, but Hades has the old lady liquified before she can blow TLK into a flask. Hades then warns the other denizens of his realm not to help the visiting heroes, or else.

This coincides with David discovering that Hades has had the “haunting” phone booth ripped out, meaning no more “calls” to baby Neal back home. Snow meanwhile recognizes that her best friend Ruby harbors special feelings for MIA Dorothy, and nudges her to act on them. The heroes agree that David will accompany Ruby back to Oz, to deliver TLK to Dorothy, after which he will travel home to Storybrooke to be with Neal. But at the last moment, David reveals that Snow will actually be making the trip, now that Hook has used his enchanted appendage to replace Snow’s name on the tombstone with David’s. 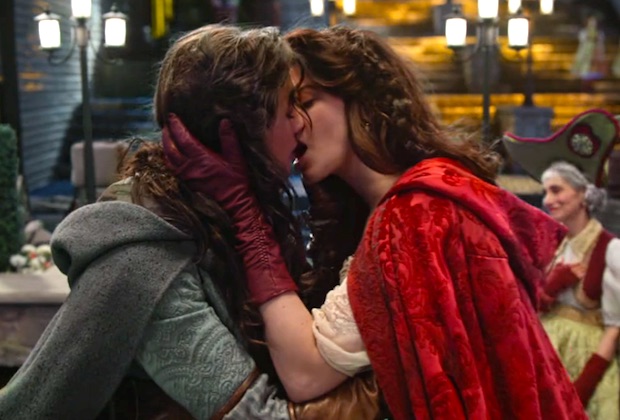 use the magic slippers to get to Oz, where Ruby awakens Dorothy with True Love’s Kiss — followed by many more, after the ladies profess their true feelings for one another. Back in the Underworld, author Henry reveals his new pages to the gang, showing Dorothy’s awakening as well as the fact that Snow made it home to Neal safely.

Elsewhere in the episode: Belle worried that, as Dark Swan did with Zelena, Hades might fast-track her pregnancy to quickly lay claim to her and Rumple’s child. Zelena gives the bookworm the idea to “preserve” herself with a sleeping curse, thus affording Rumple all the time he needs to outwit Hades and nix the contract, while keeping their baby safe. Rumple rebuffs this notion, seeing as he refuses to be the man she wants him to be, thus disqualifying him for the TLK that will be needed to wake her. But Belle says that her father will be the one to save her, so Rumple better get her back to Dad once this mess is sorted out!

What did you think of the episode “Ruby Slippers”?